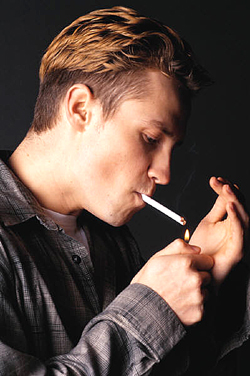 As a primary care physician I routinely talk with patients about the hazards of smoking. But I must confess that I don’t think of it as something we need to teach clinicians a lot about. For example, I included the subject in a talk I was giving on LGBT health at a VA Hospital and was told they have a comprehensive anti-smoking program that applies to all. This is consistent with statistics showing the vast majority of clinicians know how to address smoking cessation and incorporate it into patient care.

Some of this is attributable to TARGETED marketing. Tobacco companies have long targeted our community with ads featuring LGBT people and themes. They have supported our causes. While the support has been welcomed, it has come with a price. And smoking has been, historically, tightly woven into the fabric of LGBT socializing in bars and clubs, although this is slowly changing.

Meanwhile, smoking remains a potent stress reliever for those struggling with acceptance in a tough world, though it is well established that in the long run, smoking diminishes one’s health and appearance. One of the best smoking cessation campaigns I’ve seen was produced years ago by the Massachusetts Department of Health, showing photos of the impact of smoking on how one looks, with cracking skin and difficulty breathing.

Clearly public health outreach is critical to help LGBT people―and clinicians―understand how smoking disproportionately affects the LGBT community. In recognition of LGBT Pride Month in June, the CDC released an enlightening video called “Smoking Within the LGBT Community.” The CDC also rolled out a video from its Tips From Smokers Campaign featuring Brian, a man who suffered a stroke that resulted from complications due to smoking and his HIV status.  [pullquote]One of the best smoking cessation campaigns I’ve seen was produced years ago by the Massachusetts Department of Health, showing photos of the impact of smoking on how one looks, with cracking skin and difficulty breathing. [/pullquote]

Those are critical public health education tools. But studies show that over 70 percent of smokers do see clinicians. Research also shows that health care providers who take the time to talk with patients about smoking actually make a difference in helping them quit successfully. Doctors absolutely must incorporate these discussions into all visits with patients who smoke.

An approach recommended by the U.S. Department of Health and Human Services has the virtue of simplicity but hits the basics. It’s called the “5 A’s:”

1. Ask about tobacco use.

3. Assess willingness to attempt to quit.

4. Assist in quit attempt with medication and counseling.

This year marks the 50th anniversary of the Surgeon General’s influential report on the hazards of smoking. The policies spurred by that report have cut our country’s smoking rate by more than half. As we celebrate that progress, we owe it to our families, our friends, and the LGBT community to continue to improve awareness that rates of smoking―and its ultimate impact on health―impact LGBT people at far higher rates than the general population.