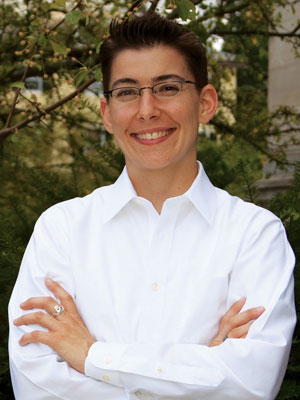 By: Kara Suffredini, Esq.*/Special to TRT–

Eight years ago, we knew that if we won the right to marry in Massachusetts the rest of the country would follow.

We were right. Today, five other states and the District of Columbia recognize the marriages of same-sex couples, and it’s only a matter of time before marriage equality is recognized in all 50 states.

But during the same time Massachusetts was debating marriage equality, Congress was considering the Federal Marriage Amendment—which would ban any legal recognition of the marriages of same-sex couples anywhere in the country.

The outcome of the November 6 election will determine whether our country continues to move forward in the march to full equality, or whether it returns to the days of fighting back mean-spirited measures like the Federal Marriage Amendment

That is why I have been personally involved in supporting Elizabeth Warren for the U.S. Senate since the moment she launched her campaign.

If Republicans gain control of the Senate, we will be back on our heels defending marriage equality while urgently needed proposals protecting LGBTQ employees, youth and families gather dust on a shelf.

The stakes couldn’t be higher. We have had huge successes in Massachusetts, not only with marriage equality, but also, in the last year alone, with the passage of the Transgender Equal Rights Law, improvements in screening and preventing of HIV/AIDS and a special statewide commission to address the alarming rate of homelessness among LGBTQ youth. But there is important work on equality that can’t be done on Beacon Hill alone. For starters, only Capitol Hill lawmakers, and the federal judges they confirm, can end federal marriage discrimination.

Sen. Scott Brown says that marriage equality is “settled law” and has dismissed our community’s efforts to end employment discrimination as a “pet project.” Try telling that to married Massachusetts couples who can’t access federal benefits like social security and Medicare thanks to the Defense of Marriage Act or to the transgender job applicant who is rejected over and over simply because of who she is.

We need someone on Capitol Hill who will champion our humanity and advance our equality not just when it’s convenient, but all the time, because it’s the right thing to do. Elizabeth Warren is that champion.

Elizabeth Warren will fight to protect all LGBTQ workers from discrimination, everywhere in our country.

Elizabeth Warren will fight for appropriate funding for HIV/AIDS prevention, treatment and research.

Elizabeth Warren will fight to repeal the law that keeps our marriages from counting in other states and in the eyes of the Federal government.

Elizabeth Warren will be a champion of safe schools for all youth, including those who are LGBTQ or come from LGBTQ-headed families.

This race isn’t just about the kind of leader we need. This is about the kind of leader we deserve. We deserve a senator who appreciates that marriage equality is more than just “settled law” and believes that freedom from discrimination is essential to bettering lives, strengthening families and improving communities. Massachusetts should not settle for less. We need a supporter, and we deserve a champion. That is why I am supporting Elizabeth Warren to be our next United States Senator.

As inheritors of our states’ tradition of leadership, we all have an obligation to choose the champion in this Senate election. Elizabeth will fight for us, and she deserves your vote.

*Kara Suffredini, Esq, the executive director of MassEquality, is supporting Elizabeth Warren for US Senate. MassEquality has not made an endorsement in the race.