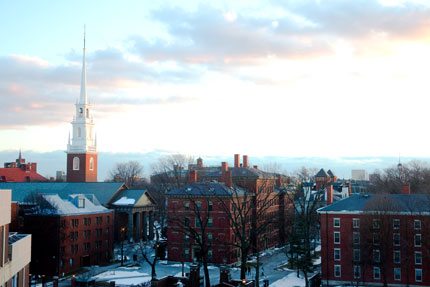 CAMBRIDGE, Mass.—Throughout the 2014-2015 academic year, Harvard University is hosting a seminar series called “After Marriage: The Future of LGBT Activism.” As many states continue to pass legislation in favor of marriage equality, this series looks at what the most important issues facing the LGBT movement are now, including discrimination and criminalization of people with HIV, class and poverty issues, the debate over relying on federal law to grant equality, and the issue of religious exemptions that permit discrimination against LGBT people.

The series was organized by Michael Bronski, professor of practice in activism and media in Studies of Women, Gender and Sexuality at Harvard University. The seminars are also the product of the Mahindra Humanities Center at Harvard and the Committee on Degrees in Studies of Women, Gender, and Sexuality, which produces an annual series on different topics pertaining to the department. [pullquote]In Mogul’s opinion, the importance of marriage equality is insignificant in comparison to fighting other basic discriminations such as protecting people from getting fired or harassed on the street.[/pullquote]

“Michael is a true visionary,” said Joey Mogul of DePaul University College of Law and the People’s Law Office, who gave the presentation “Deceptive Gender Benders, Sexual Predators, and Homicidal Homos: The Ongoing Criminalization of LGBTQ People in the U.S.” at the series in November. “He’s brilliant and perpetually, consistently, and principally always looking to ensure that the needs of all LGBT people, particularly those of color, are included in the conversations, [as well as] in the activism with respect to the queer and trans communities. I am deeply honored to have been invited by him and I relish in the opportunity to ever be in his space, and to be able to talk about these issues.”

The series included a variety of activists and lawyers in the LGBT movement. Aisha Moodle-Mills from the FIRE Initiative at the Center for American Progress presented “Jumping Beyond the Broom: Class, Race, and Poverty in the LGBT Movement” in September. Kevin Cathcart, executive director of Lambda Legal, presented on “HIV Discrimination and Criminalization” in October.

The next event will be held February 12, 2015 and will feature Nan Hunter, associate dean for graduate programs and professor of law at Georgetown Law School, on “The Conflict Between LGBT Equality and Religious Liberty.” The series will then conclude March 27 with a day-long symposium where the four speakers will come back to do a panel discussion, as well as a keynote from activist and writer Jewelle Gomez. The theme for the symposium is “Holding Hands: Social Change Activism as a Way of Life.”

“It really is rewarding to hear, because a lot of times in political discussions it’s often either exactly what you expect to hear, or it’s people fighting in a way that’s not productive, and these were people who brought really new perspectives to a lot of the people who attended, and it really sparked very, very good conversations,” said Bronski of the previous seminars.

The root of these conversations is based in the LGBT community’s struggle for marriage equality rights for the last two decades, and whether or not this issue is crucial. In particular, Mogul’s November discussion focused on the criminalization of LGBTQ People in the United States. Mogul’s stance was that marriage is a much smaller piece of a bigger pie in terms of LGBT civil rights. In Mogul’s opinion, the importance of marriage equality is insignificant in comparison to fighting other basic discriminations such as protecting people from getting fired or harassed on the street.

Bronski said the series has attracted nearly 60 people per event, which he attributes to his effort to market the series outside of the university, something which has not been done previously. Therefore, attendees have included a majority of activists rather than students.

“As somebody who deeply believes that there’s a real place for interactions between universities and community organizations, between universities and the towns and cities in which they are placed, and also an intellectual examination of issues and on the grounds, grassroots activist approach, it seems to me that this is doing exactly what I wanted, [which is] to bring people together for really good conversations,” said Bronski. “People are really involved. People really responded. Some really [difficult] issues were sort of approached and people discussed them in a really productive way that moved the conversation forward.”

Sponsors for the series aside from Harvard include the Hispanic Black Gay Coalition (HBGC), the Open Gate Foundation, as well as the Gay & Lesbian Advocates & Defenders (GLAD).

“This is a worthy and timely conversation,” said Carisa Cunningham, director of Public Affairs & Education at GLAD. “It’s important for us to envision and work for a world in which all of us, including the most vulnerable, are not only safe from discrimination and violence, but are celebrated and affirmed.”

Tickets to the day-long symposium will be free but require online registration for about 100 spots. Breakfast, lunch and dessert will be served throughout the day for those who register. Bronski said he does not plan to hold the same seminar series next year, but hopes to hold similar events in the years to come.

For more information on the upcoming events in the series, visit www.wgs.fas.harvard.edu/aftermarriage.