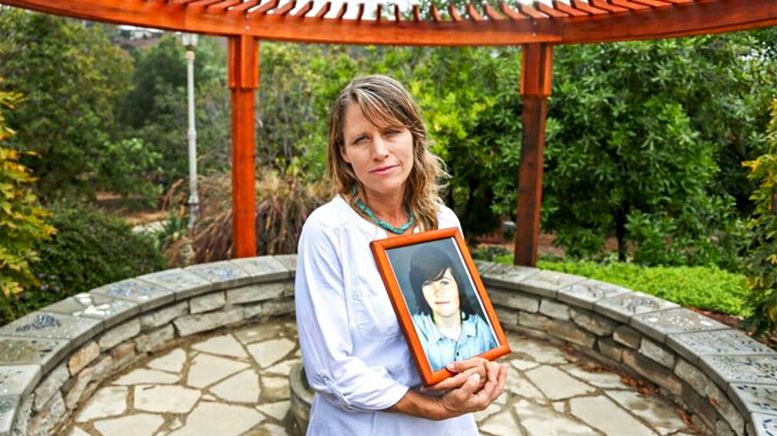 Katharine Prescott holds a portrait of her son, Kyler Prescott, in the garden she built in his memory outside her San Diego-area home. He passed away in May 2015.
Photo: NCLRights.com

The hospital didn’t follow the family’s requests to avoid discrimination against the transgender teenager, which eventually resulted in catastrophic result

SAN DIEGO, Calif.—Today, the mother of a transgender teenaged boy who was admitted into Rady Children’s Hospital-San Diego (RCHSD) for inpatient care filed a lawsuit against the hospital for discrimination against her son.

Katharine Prescott took her 14-year-old son, Kyler Prescott, to RCHSD in early April 2015 for suicidal ideation and for treatment of his serious self-inflicted injuries following an incident of transphobic harassment by his peers. The hospital was aware that Kyler was a transgender boy and Katharine made clear to hospital staff that her son must be treated as male for all purposes. But during his stay, hospital staff repeatedly addressed Kyler—who came out to his family as transgender at 13 and whose gender markers were legally changed to male—as a girl.

Twenty-four hours into his 72-hour stay, and after several failed attempts by his mother to correct the discrimination by the hospital, the hospital’s psychiatrist determined that despite his serious mental health issues, Kyler should be discharged early from RCHSD rather than remaining for the full 72 hours. About five weeks later, on May 18, 2015, Kyler died by suicide.

Katharine is represented by the Transgender Law Center, the National Center for Lesbian Rights, and attorneys at Foley & Lardner LLP. The complaint, filed in federal court in San Diego, states that RCHSD violated federal and California laws by discriminating against Kyler based on his sex (including his gender identity) and based on his disability, and that the hospital engaged in unfair and deceptive business practices by claiming that it was experienced in treating transgender patients, when in fact it discriminated against Kyler and made his condition worse.

“When my son was in despair, I entrusted Rady Children’s Hospital with his safety and wellbeing,” said Katharine Prescott. “Hospitals are supposed to be safe places that help people when they’re in need. Instead of recovering at the hospital, Kyler got worse because staff continued to traumatize him by repeatedly treating him as a girl and ignoring his serious health issues. It’s painful to speak out, but I want to make sure no other parent or child ever has to go through this again.”

Studies show that when transgender children are unable to live consistently with their gender identity, they experience high rates of depression and self-harming behaviors, including suicide. The consequences of disaffirmation of one’s gender identity and discrimination are dire for transgender youth: they experience depression, anxiety, self-harm and suicidal ideation at two to three times the rate of their nontransgender peers.

“Transgender children in crisis must be able to seek help without having to fear discrimination from the very medical providers who are supposed to care for them,” said Transgender Law Center Executive Director Kris Hayashi. “What happened to Kyler is heartbreaking and must not be allowed to happen again.”

“Deciding to admit your child for inpatient hospital care is one of the most difficult things a parent can face,” said Amy Whelan, Senior Staff Attorney at the National Center for Lesbian Rights.  “Hospitals have a great responsibility to provide care to all children who need it and Rady utterly failed to do that in this case.”

Download the complaint and learn more about the case.
The National Center for Lesbian Rights is a national legal organization committed to advancing the human and civil rights of the lesbian, gay, bisexual, and transgender community through litigation, public policy advocacy, and public education.

Transgender Law Center is the largest national organization dedicated to advancing justice for transgender and gender nonconforming people through litigation, policy advocacy, and public education. Transgender Law Center envisions a future where all people can live safely, authentically, and free from discrimination regardless of their gender identity or expression.