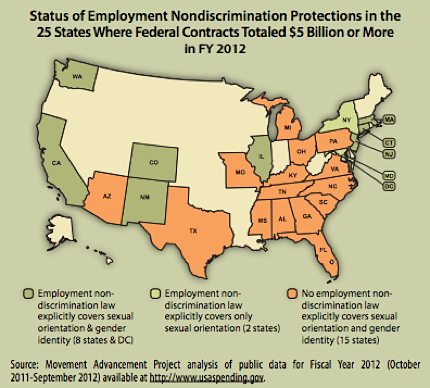 WASHINGTON, D.C. — American taxpayers send almost $300 billion per year in federal contract dollars to businesses in states that have not yet passed laws to protect lesbian, gay, bisexual, and transgender (LGBT) Americans from workplace discrimination, according to a new brief released today. Subsidizing discrimination with taxpayer money is a lose/lose proposition for taxpayers and LGBT employees—and it breaks America’s basic bargain that workers will judged and rewarded based on their contributions and capabilities, according to the brief’s authors: the Center for American Progress, Freedom to Work, the Human Rights Campaign, the Movement Advancement Project, and Out & Equal Workplace Advocates.

Of the 25 states in which businesses received $5 billion of more in federal contracts, a substantial majority (60%) have no employment protections based on sexual orientation. And, more than two-thirds (68%) have no employment nondiscrimination laws explicitly covering gender identity.

“With no federal employment protections, too many LGBT workers are at risk of losing their jobs and their livelihoods,” said HRC President Chad Griffin. “The permanent solution is to pass an inclusive ENDA. In the meantime, we hope President Obama will issue an executive order prohibiting federal contractors from discriminating against LGBT Americans.”

“With no federal law protecting LGBT workers against discrimination, an executive order would fill the significant gaps in protections that leave far too many workers without a job to support themselves and their family. Should President Obama take action, we would likely reach a tipping point in terms of nondiscrimination coverage for the LGBT workforce. With broad support from the public, even from a majority of Republicans, workplace nondiscrimination should be a no-brainer,” said Winnie Stachelberg, Executive Vice President of External Affairs at the Center for American Progress.

“With the stroke of a pen, President Obama can protect American taxpayers and LGBT employees,” said Tico Almeida, President of Freedom to Work. “More than 175,000 Americans have already signed Freedom to Work’s online petition because they don’t want our government to subsidize corporations where talented employees fear getting fired just because of who they are or who they love.”

“In 29 states, you can be fired simply for being lesbian, gay, bisexual, or transgender. No one should have to choose between the job they love and the person they love. An executive order signed by the President means that thousands would be treated fairly right now and set the stage for renewed action towards a federal Employment Non-Discrimination Act, extending that same basic fairness to all LGBT people, wherever they happen to work,” said Selisse Berry, Founder and Chief Executive of Out & Equal Workplace Advocates.

The Center for American Progress is a nonpartisan research and educational institute dedicated to promoting a strong, just and free America that ensures opportunity for all. We believe that Americans are bound together by a common commitment to these values and we aspire to ensure that our national policies reflect these values. We work to find progressive and pragmatic solutions to significant domestic and international problems and develop policy proposals that foster a government that is “of the people, by the people, and for the people.”

Founded in 2006, the Movement Advancement Project is an independent think tank that provides rigorous research, insight and analysis that help speed equality for lesbian, gay, bisexual and transgender people. Learn more at www.lgbtmap.org.

Out & Equal Workplace Advocates is committed to creating safe and equitable workplace environments for lesbian, gay, bisexual, and transgender employees. We believe that people should be judged by the work they do, not by their sexual orientation or gender identity. Every day, we work to protect and empower employees to be productive and successful—so they can support themselves, their families, and contribute to achieving a world free of discrimination for everyone.