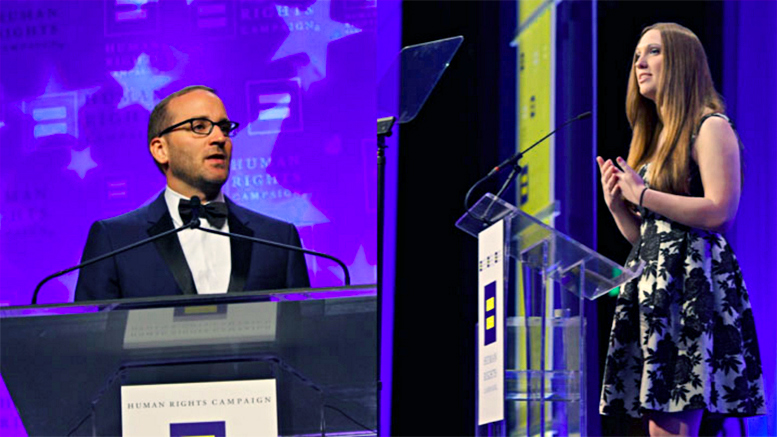 The Human Rights Campaign announced recently that HRC National Press Secretary Sarah McBride will speak at the DNC on Thursday—marking the first time in history an openly transgender person will speak at a major party convention. HRC President Chad Griffin will also address the Democratic National Convention that evening.

“Hillary Clinton won’t be the only woman to make history this Thursday. When Sarah McBride takes the stage, she will become the first transgender person to speak at a national Democratic or Republican convention,” said HRC President Chad Griffin. “Sarah’s inclusion in Thursday’s program is a significant milestone for our community, and it sends a strong message that transgender people and their voices matter. I’m also honored to address a national convention where LGBTQ advocates will play such an integral and historic role. Next week’s Democratic National Convention will underscore the stark contrast between Hillary Clinton and Tim Kaine’s vision for a more equal America and Donald Trump and Mike Pence’s agenda of hate and division.”

McBride currently serves as the National Press Secretary for the Human Rights Campaign and on the steering committee of Trans United for Hillary, a volunteer effort dedicated to educating and mobilizing transgender people and their allies in support of Hillary Clinton. McBride was invited to speak on the main stage of the convention by the Congressional LGBT Caucus and her speech will follow remarks by Caucus Co-Chair Rep. Sean Patrick Maloney, (D-NY).

“I’m honored for this opportunity to share my story and to be the first transgender person to speak at a major party convention,” said Sarah McBride, National Press Secretary for the Human Rights Campaign. “People must understand that even as we face daily harassment, tragic violence, and an onslaught of anti-LGBTQ political attacks across the country, we are real people merely seeking to be treated with the dignity and respect every person deserves. I’m so proud to stand with the LGBT Caucus and speak out in support of Hillary Clinton, because we know she stands with us.”

Last week, the RNC adopted the most anti-LGBTQ platform in the Republican Party’s history, including an endorsement of so-called “conversion therapy” and dangerous, discriminatory laws like North Carolina’s HB2. A number of speakers at the Convention and related events also mocked and ridiculed transgender people.

A record number of LGBTQ delegates—including a historic high of 27 transgender delegates—will also be attending the Democratic convention.The party is slated to adopt the most inclusive and progressive platform ever on LGBTQ equality. That proposed platform includes planks endorsing comprehensive non-discrimination protections, opposing anti-LGBTQ bills, condemning violence against transgender people, and calling for LGBTQ equality to continue to be a part of U.S. foreign policy. Mara Keisling, veteran trans advocate, served on the platform committee.

The Human Rights Campaign endorsed Hillary Clinton in January 2016. With 1.5 million members and supporters nationwide, HRC is planning an unprecedented organizational effort to register and mobilize the nation’s pro-equality majority, and elect pro-LGBT candidates up and down the ballot. In 2016, HRC expects that the pro-equality vote will be larger, stronger, and more energized than at any point in history.