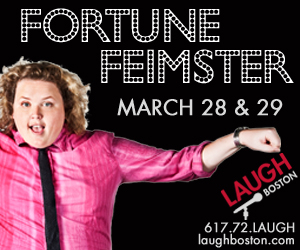 Feimster was first recognized as a contestant on “Last Comic Standing”, and shortly thereafter landed a spot on Chelsea Handler’s writing team.  She quickly became the show’s head writer and a staple in front of the camera, as well as off.  Feimster is best known for her appearances on the “Chelsea Lately” roundtable segment.  She will continue to be a part of “Chelsea Lately” while filming with Tina Fey.

WHAT: Feimster brings her hilarious stand-up to the Laugh Boston stage for two shows a night.

HOW: Tickets are $25 or $35 and can be purchased at the Laugh Boston Box Office or online at www.laughboston.com.