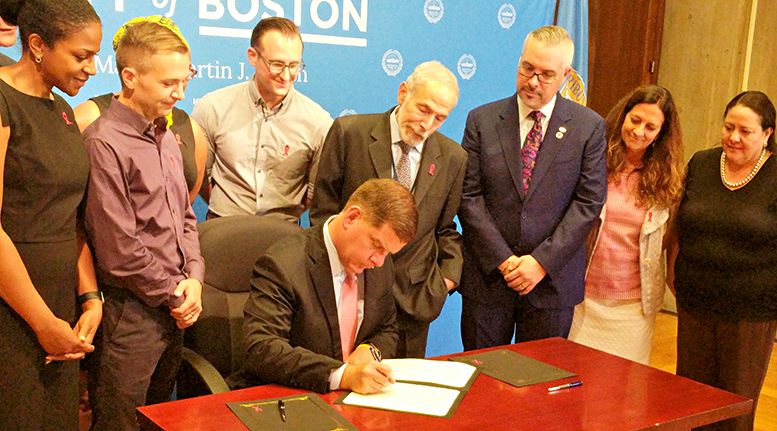 The Getting To Zero Coalition is made up of 35 community-based organizations and health centers statewide working to eliminate the transmission of HIV.

Before signing the Paris Declaration on Fast-Track Cities at City Hall August 31, Boston Mayor Martin J. Walsh wanted to make something clear: He’s grateful not just for the work of those in his administration who are pushing policies to end the transmission of HIV, but also for the advocacy of the Getting to Zero Coalition.

“The work you do is so important,” Walsh said. “You never know when an outbreak [of HIV] is going to happen potentially, and the stigma around all of this is daunting. So I think we have our work cut out for us here in Boston to set a tone for the rest of Massachusetts and the country.”

In signing the Paris Declaration on Fast-Track Cities, Walsh committed to taking the steps necessary to ensure that by 2020, 90 percent of Boston residents living with HIV are aware of their status, 90 percent of those diagnosed with HIV receive treatment with antiretroviral therapy, and 90 percent of those in treatment achieve “viral suppression”—a state of health from which it is nearly impossible to transmit HIV to another person.

Thanks to the city’s long history of taking the public health steps necessary to contain HIV as well as the efforts of community-based organizations and healthcare centers like AIDS Action Committee, Fenway Health, and the other members of the Getting To Zero Coalition, Boston has already met the first of the three steps: 90 percent of those estimated to be living with HIV in the city of Boston (approximately 5,884 people), have been diagnosed with HIV.

The next step is to get 90 percent of them connected with a healthcare provider who is not only prescribing the medicine they need to treat their HIV, but also treating other HIV-related healthcare issues. Currently, about 72 percent of those living in Boston with a diagnosis of HIV (about 4,236 people) are engaged in care. Of them, only 70 percent (about 3,707 people) have achieved viral suppression.

“We need a cure, we need a vaccine,” said AIDS Action Committee Executive Director Carl Sciortino. “But short of those two needs, we still have the tools to bring this epidemic to a close.”

Those tools include PrEP (pre-exposure prophylaxis), an antiretroviral medication that if taken as prescribed is a safe and effective way to prevent HIV infection; treatment as prevention (making it as easy as possible for those diagnosed with HIV to get the medicine needed to suppress their HIV); and support services from community-based organizations with expertise in reaching populations that are both vulnerable to HIV and not connected with a healthcare provider.

Kenneth H. Mayer, MD, Medical Research Director and Co-Chair of The Fenway Institute, added that Boston was already engaged in a lot of excellent work in reaching those most vulnerable to HIV and caring for those already diagnosed. But he warned that reaching those last few thousands of people in the city who are keeping the epidemic alive will take a lot of work.

“Having political will is an important part of the puzzle,” Mayer said. But achieving the goals of the Fast-Track Cities Initiative “means stable housing, it means dealing with domestic violence, homelessness, all of the social determinants” of health.

The Fast-Track Cities Initiative was launched in Paris on World AIDS Day 2014. There, mayors from 27 cities in 50 countries signed the Paris Declaration on Fast-Track Cities committing to do what was necessary to end the transmission of HIV in their locales. Today, 83 cities around the globe, including 23 in sub-Saharan Africa and 12 others in the United States, have signed the Paris Declaration. The 12 U.S. cities already participating in the initiative are Atlanta; Baltimore; Birmingham, Ala.; Denver; Miami; New Orleans; New York City; Oakland, Calif.; Phoenix, Ariz.; Providence, RI; San Francisco, and Washington, D.C.

Advocacy for the initiative is organized primarily by the International Association of Providers of AIDS Care (IPAC). IPAC President & CEO José M. Zuniga, PhD, MD attended the City Hall ceremony and told Walsh that he was “joining a remarkable group of mayors who have shown political will” to aggressively engage in the work required to end the epidemic. Zuniga added that he looked forward to seeing results from Boston and sharing its best practices and experiences with other cities.

The Massachusetts Getting To Zero Coalition is made up of 35 community-based organizations and health centers statewide working to eliminate the transmission of HIV. In 2016, it released a comprehensive plan to eliminate HIV in Massachusetts that included a recommendation to get Boston and other big cities in Massachusetts to sign the Paris Declaration and join the Fast-Track Cities Initiative.

A recorded livestream of the City Hall signing ceremony can be viewed on the Fenway Health Facebook page.