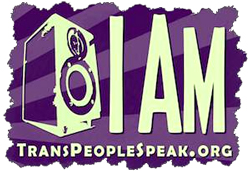 New York, NY – GLAAD, the nation’s lesbian, gay, bisexual and transgender (LGBT) media advocacy and anti-defamation organization, and the Massachusetts Transgender Political Coalition (MTPC), announced the upcoming national launch of the “I AM: Trans People Speak” video series and called for the public to submit their own stories. The campaign aims to spotlight the stories of transgender Americans and their allies in an effort to educate the public about transgender issues, as well as speak to transgender youth and adults.

A trailer video of Laverne Cox, Isis King, Noah Lewis and Kit Yan, as well as more information about the campaign is available here: http://bit.ly/xXh2Lc and http://bit.ly/A5R42R.

GLAAD and MTPC asked members of the transgender community and their allies to create their own videos for the upcoming launch.

“The stories of transgender Americans remain relatively invisible in both national and LGBT media,” said GLAAD spokesperson Herndon Graddick. “These stories will not only empower members of the transgender community who rarely see relatable stories, but also educate Americans everywhere about the fact that the community is a valuable part of the fabric of our culture. The campaign will also shine a light on the high level of discrimination that our transgender brothers and sisters continue to face in schools, the workplace and in their own neighborhoods.”

“By providing a place for transgender people, family members and our allies to share their stories, we hope to empower our community and the general public to advocate for transgender equality and move the culture towards acceptance of transgender youth and adults, said Gunner Scott, executive director of MTPC. “With GLAAD’s leadership on this project, we will be educating the public and be a resource to the mainstream media about the reality of transgender peoples’ lives and the unique challenges they face due to pervasive bias, stereotypes and misunderstanding.”

GLAAD and MTPC will release videos of transgender leaders and allies speaking out in the coming weeks, with participants including:

• Laverne Cox – actress, producer, and writer. Laverne was the first African American transgender woman to appear on a national reality show when she competed on MTV’s “I Want to Work For Diddy.” The show received the GLAAD Media Award for Outstanding Reality Series. She later co-created, co-produced and starred in VH1’s “Transform Me.”  She has starred in a number of television episodes and films including Musical Chairs, which opens Friday in select cities. She is also a contributor to the Huffington Post.

• Kit Yan – spoken word artist. Kit was featured in the HBO documentary Asians Aloud. His work has been commissioned by the Census, showcased by the Department of Justice, and taught at universities around the world.

In 2010, MTPC launched the original “I AM: Trans People Speak” campaign to educate Massachusetts residents about the lives of their transgender neighbors. That campaign has now grown to include the voices and experiences of over 40 local transgender people, family members and allies. Recognizing the need for transgender support and education about transgender issues around the country, “I AM: Trans People Speak” was developed. GLAAD has partnered with MTPC on the production, outreach and the communications around the campaign.

The video series and written testimonials illuminate the realities and challenges of being transgender. Those participating in the campaign will discuss their experiences in their communities, workplaces and families, as well as their thoughts on the current state of transgender awareness and equality.

To submit videos or learn more about the project, visit http://www.glaad.org/transpeoplespeak. For more information about MTPC, please visit www.masstpc.org.

About MTPC
Founded in 2001, the Massachusetts Transgender Political Coalition (MTPC) is a 501(c) 3 that works to end discrimination on the basis of gender identity and gender expression. MTPC educates the public, advocates with state, local, and federal government, engages in political activism, and encourages empowerment of community members through collective action. For more information visit www.masstpc.org

About GLAAD
The Gay & Lesbian Alliance Against Defamation (GLAAD) amplifies the voice of the LGBT community by empowering real people to share their stories, holding the media accountable for the words and images they present, and helping grassroots organizations communicate effectively. By ensuring that the stories of LGBT people are heard through the media, GLAAD promotes understanding, increases acceptance, and advances equality. For more information, please visit www.glaad.org or connect with GLAAD at www.glaad.org/connect.