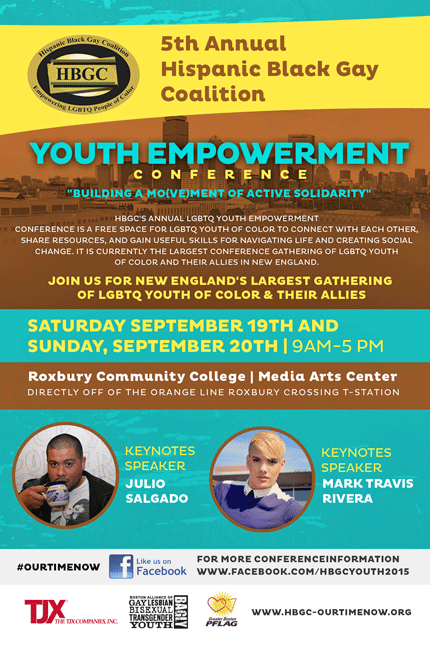 The event has become the largest conference gathering of LGBTQ youth of color in New England and has also grown in its diversity of participants and programming.  This year’s conference theme is “Building a Mo(ve)ment of Active Solidarity,” with the conference hash tag being #OurTimeNow to emphasize that now is the moment for LGBTQ youth of color to take the lead on social, economic and political issues impacting communities in Boston and beyond.

The conference will feature over 30 workshops for participants to engage in, ranging from discussions around being an LGBTQ student of color, the undocuqueer/undocumented movement in the larger LGBTQ community, the performing arts as a tool for social change, transgender* identities and rights and more. In addition to workshops, conference participants will have the opportunity to immerse themselves in action-oriented discussions through caucuses, network with likeminded people, meet new friends and celebrate life, resistance and solidarity at the dance after-party on Saturday night. [pullquote]This year’s conference theme is “Building a Mo(ve)ment of Active Solidarity,” with the conference hash tag being #OurTimeNow to emphasize that now is the moment for LGBTQ youth of color to take the lead on social, economic and political issues impacting communities in Boston and beyond. [/pullquote]

Joining HBGC at the this year’s conference to keynote will be self identified “artivist” and pioneer in the undocumented LGBTQ movement Julio Salgado, whose artwork has been featured in ColorLines. Salgado was also featured on the cover of Time Magazine in July 2012 highlighting the movement of undocumented activists. In addition to Salgado, youth activist Mark Travis Rivera will also be a featured keynote speaker. Mark brings years of experience in writing, dance, and activism to the conference and has previously spoken at Harvard University and NYU. To bring the laughs and entertainment, HBGC will  welcome Sampson McCormick-a nationally touring, award winning standup comic who has been featured on BET, and the Oprah Winfrey Network. Sampson has performed his riveting, original and fresh standup at the White House and The Kennedy Center among other places.

The 2015 LGBTQ Youth Empowerment Conference is FREE and open to all LGBTQ youth of color, those who support them and allies. To register, visit: hbgc-ourtimenow.org.  Individuals are also encouraged to share the word on social media using the hashtag #OurTimeNow, and by “liking” the official conference facebook page at: facebook.com/HBGCYouth2015.

The Hispanic Black Gay Coalition (HBGC) is one of few non-profit organizations in Boston dedicated to the unique needs of the Black, Hispanic and Latin@ LGBTQ community. Founded in 2009, we work to inspire and empower Latin@, Hispanic and Black LGBTQ individuals to improve their livelihood through activism, education, community outreach, and counseling For more information regarding the conference contact Conference Director, Bryce Celotto.