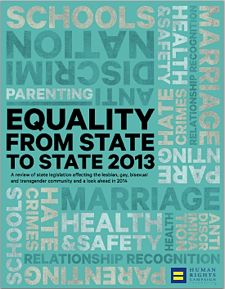 Equality from State to State by the Human Rights Campaign

Equality from State to State by the Human Rights Campaign

2013 was the year of marriage equality, yet much work remains to be done to achieve full equality

WASHINGTON – The Human Rights Campaign Foundation, the educational arm of the nation’s largest lesbian, gay, bisexual, and transgender civil rights organization, today released a comprehensive state-by-state report detailing LGBT-related legislation in 2013, a year marked by huge victories for the LGBT community from statehouses across the nation to the United States Supreme Court. The report indicates that the majority of pro-LGBT legislation came in the form of marriage equality legislation. In 2014, HRC expects bills providing comprehensive, inclusive non-discrimination protections will take center stage, including those aimed at preventing health professionals from subjecting youth to sexual orientation and gender identity change efforts. This is the tenth year HRC has published this comprehensive guide to state legislation affecting LGBT people. To view the report online, including maps of current state laws, visit: www.hrc.org/statetostate.

“As we make great strides toward LGBT equality, it is clear much work remains to be done at the state level,” said HRC President Chad Griffin. “With an impressive number of states making marriage equality the law of the land in 2013, momentum is at our backs. Now we’ve got to work harder than ever before, because no LGBT American should have to wait for fairness, no matter where they live.”

Highlights of the report include:

Marriage equality: Marriage equality legislation was passed in Delaware, Hawaii, Illinois, Minnesota, and Rhode Island in 2013, while court decisions paved the way to marriage equality in New Jersey, New Mexico, Utah (temporarily), and Oklahoma (decision immediately stayed). The Nevada legislature passed a bill to propose a constitutional amendment to remove the existing ban on marriage equality, and the legislature must pass the bill again in 2015 for the amendment to appear on the ballot. The Colorado legislature passed, and the Governor signed into law, a civil unions bill. The legislatures in Arkansas and Oklahoma both passed bills reaffirming their states’ “Defense of Marriage” amendments. And, advocates in Indiana, Pennsylvania, New Mexico, and West Virginia were able to keep discriminatory constitutional amendments at bay.

Schools: California Gov. Brown signed into a law a bill clarifying that schools must allow transgender youth access to all programs and facilities consistent with their gender identity.

The Human Rights Campaign Foundation is the educational arm of the Human Rights Campaign, America’s largest civil rights organization working to achieve lesbian, gay, bisexual and transgender equality. By inspiring and engaging all Americans, HRC strives to end discrimination against LGBT citizens and realize a nation that achieves fundamental fairness and equality for all.