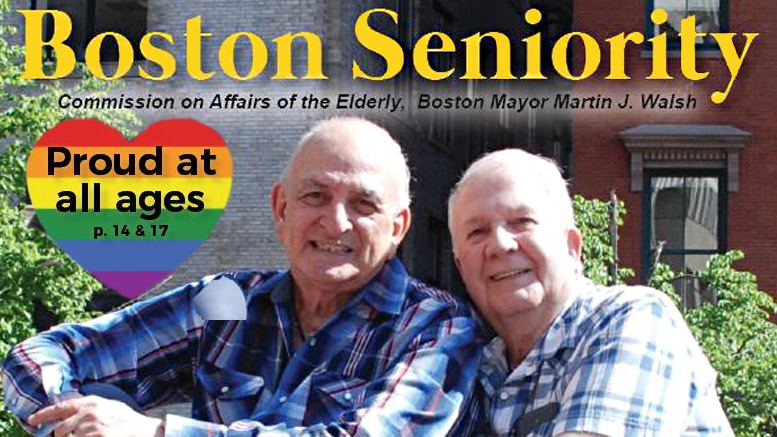 BOSTON—Mayor Martin J. Walsh and the Commission on Affairs of the Elderly have published their first Pride issue of Boston Seniority magazine, highlighting stories from some of Boston’s older LGBTQ residents.

“It is so important that we share stories that reflect the range of diversity and experiences in our city and Boston Seniority magazine continues to do that,” said Mayor Martin J. Walsh. “For older Bostonians in the LGBTQ community, we want them to know that the work they started continues today and that communities are more inclusive because of their advocacy and voices.”

Former South Enders Sheri Barden, 84, and Lois Johnson, 86, reflected on their relationship and the milestones of their trailblazing advocacy work. Lois and Sheri were co-presidents of the Boston chapter of Daughters of Bilitis, the first organization for lesbian rights, and stars of the acclaimed documentary Gen Silent.

“Pride is an opportunity for the younger ones to meet with older people who have broken down a lot of barriers,” Lois said. “Now it’s normal to think you will get married. But good God, in the 1950s, it was enough for us to think that we’d survive and not be ostracized or lose our jobs and reputations if anyone discovered we were in love with someone of the same sex. We want young people to understand they have the ball in their hands, and they have to run with it. Never become complacent because prejudice is ever with us.”

Dorchester resident Danny Harris, 69, is also featured in the June issue. “When I was younger, me being black and being gay wasn’t something I broadcasted. I didn’t hide it, but I also wasn’t standing on a soapbox to tell the world. I didn’t feel like society was ready. In retrospect, I realized I wasn’t equipped to defend myself. Now I am. I am fierce. I have experience. I can handle anything that comes to me.”

Last year, Boston Seniority magazine celebrated its 40th anniversary with a redesigned format. Started in November 1977, the magazine has a circulation of 15,000 copies, 10 times a year. It is distributed to more than 300 sites across the city, including Boston Public Library branches, senior housing complexes, and grocery stores. The magazine features content that includes important resources and ways to access benefits, lifestyle and health tips, and feature stories about older adults.

ABOUT THE COMMISSION ON AFFAIRS OF THE ELDERLY

The Commission on Affairs of the Elderly facilitates full and equal participation in all aspects of life by older adults in Boston. The commission is dedicated to improving the lives of Boston’s older adults by connecting them with resources and information, and it is focused on setting the City’s direction for successful aging in Boston. Read the newly launched Age-Friendly Action Plan at www.boston.gov/age-friendly, and visit www.boston.gov for more information.

Letter To The Editor: A Yes Vote Means Upholding Basic Values And Respect For All