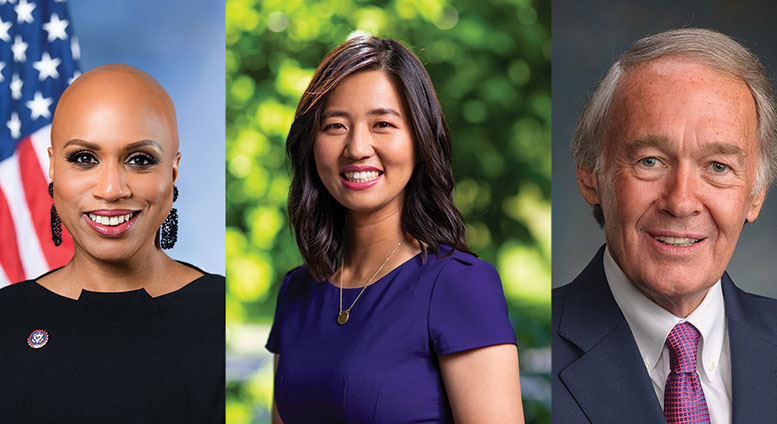 Pressley referred to Wu as her partner in the fight for equity and justice for Boston communities. In 2009, Representative Pressley became the first-ever woman of color elected to the Boston City Council. In 2012, Michelle Wu joined her as the second.

“I’ve worked closely with Michelle Wu for nearly a decade. Michelle has a passion for service and a vision for our city that is grounded in her own lived experience and belief in the transformative potential of policy. At this pivotal moment in our city’s history, we need bold leadership — that’s why I’m so proud to endorse Michelle’s candidacy for Mayor. I look forward to continuing to work alongside her to tackle the entrenched challenges of racial, social, economic, healthcare, and environmental injustice facing our communities,” said Congresswoman Pressley (MA-07).

Senator Markey, in his own endorsement, cited Wu’s leadership on climate issues and her commitment to a more equitable city. With Markey’s endorsement, Wu now has the backing of both Massachusetts U.S. senators.

Senator Markey is the co-author of the national Green New Deal to provide a framework to confront the intersecting crises of climate change, a public health pandemic, racial injustice, and economic inequality. Michelle Wu is the author of the first-ever city-level Green New Deal to make Boston a national leader on climate and environmental justice.

“As a mayoral candidate and as Boston city councilor, Michelle Wu has championed the Green New Deal and made transformational action on climate change central to her commitment to the City of Boston. Her proposals to expand access to free public transportation, decarbonize our economy, and invest in the basic rights of clean air and water will put Boston on a path to implement the systemic changes we need to provide our children, workers, and families a just and livable future. Michelle Wu will make Boston a Green New Deal city and position us to lead the national movement for climate action,” said Senator Markey.

Wu commented on the Senator’s endorsement while mentioning his work for environmental justice, working families and more.

“Senator Ed Markey’s bold vision has inspired activists, young people, and so many community members to lead, and I am honored to have his support. Throughout his career, he has been a steadfast advocate for working families, environmental justice, and a more equitable city, state, and nation. I am excited to continue to organize together, build together and fight together for our brightest future,” said Wu of Markey.

The Boston Mayoral candidate also had words of praise for Congresswoman Pressley’s endorsement and leadership, a colleague she’s worked within various capacities, one of them dating back to 2014 when they were both City Councilor and filed a gender identity non-discrimination ordinance.

“Congresswoman Ayanna Pressley’s bold leadership continues to reshape what’s possible in our city and country, and I’m so honored to receive her endorsement. We’ve legislated together, organized together, and partnered on delivering change —from equity in city contracting and healthcare access to fighting for transit justice. I can’t wait to continue partnering for Boston to lead the way in building healthy, equitable, and resilient communities across our neighborhoods,” said Wu.

Rep. Pressley is an advocate, a policy-maker, an activist, and a survivor. On November 6, 2018, Pressley was elected to represent Massachusetts’ 7th Congressional District in the U.S. House of Representatives, making her the first woman of color to be elected to Congress from the Commonwealth of Massachusetts. Congresswoman Pressley believes that the people closest to the pain should be closest to the power and that a diversity of voices in the political process is essential to crafting more effective public policy.

Born in Cincinnati and raised in Chicago, Pressley is the only child of a single mother and a father who was in and out of the criminal legal system. Pressley’s mother, Sandra Pressley, was a tenants’ rights organizer who instilled in her the value of civic engagement. Thanks in large part to her mother’s dedication to activism, the Congresswoman has always been acutely aware of the role that government can play in lifting up families and communities.

Senator Edward J. Markey, a consumer champion and national leader on climate, energy, environmental protection, and telecommunications policy, has a prolific legislative record on major issues across the policy spectrum and a deep commitment to improving the lives of the people of Massachusetts and our country. Whether the issue is climate change, clean energy, safeguarding privacy, nuclear non-proliferation, investor protection or preserving an open Internet, Senator Markey has amassed an unparalleled record of legislative achievement and progressive leadership.

[Compiled from Information From two Releases.]