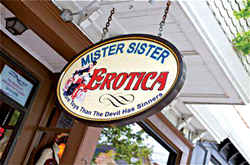 Mister Sister carries merchandise by and for the LGBT community. The boutique is located at 268 Wickenden Street in Providence.

Mister Sister carries merchandise by and for the LGBT community. The boutique is located at 268 Wickenden Street in Providence.

Owner Devioune Mayim-Daviau, who previously owned two other adult stores, Toys of Eros and WildHearts, in Provincetown, Massachusetts, has a commitment to celebrating sexuality by carrying products that are designed by and for the LGBT community McAuslan said.

“Our shelves are full of products like those by Wet For Her, a lesbian owned company that makes non-phalic shaped toys that work with a woman’s body,” explained McAuslan. “We carry [lesbian and gender queer videos by Shine Louise Houston. Our t-shirts are from Ajax 69 and underwear comes from Justus Boyz, both companies run by gay men.”

Personal touch and care for customers’ needs are what keeps one anonymous repeat customer coming back for more.

“I’ve always felt that there is sometimes a stigma attached to going to an erotica store,” she said. But, the staff at Mister Sister is always readily available to answer any questions I have and they do so in a way that made me feel very comfortable from the start.”

According to McAuslan, the goal is not to try and sell customers products. Rather, it is about having a “conversion with them.” That conversation has led to other collaborations with community groups such as RI Pride and Bear Providence, amongst others.

“We’ve witnessed an amazing growth in the diversity of our clients,” said McAuslan. “Our local leather community is beginning to view us as a resource by using the space to hold meetings and workshops. Local artists are coming to not only hang their art but also holding openings, revealing that they are proud to have their art hung on our walls.”

And, speaking of leather, McAuslan is most proud of one leather product in particular, a strap on harness that are hand-crafted by a transgender man in Mass.

“Devioune and Chris have been working on perfecting these styles for years and they are so well crafted that a couple of distributors have shown interest in them.”

Currently, the boutique is preparing to launch its website which will be completed with an e-store. McAuslan says it will be based on a user-friendly interface and will include detailed filters to allow optimal customization of product searches.

“We don’t want to waste your time,” he said. In the meantime, folks can always connect with us through our facebook page, at www.facebook.com/mistersisterprovidence.

Mister Sister is located at 268 Wickenden Street in Providence R.I. Find them on FaceBook or call 401-421-6969 for more information.