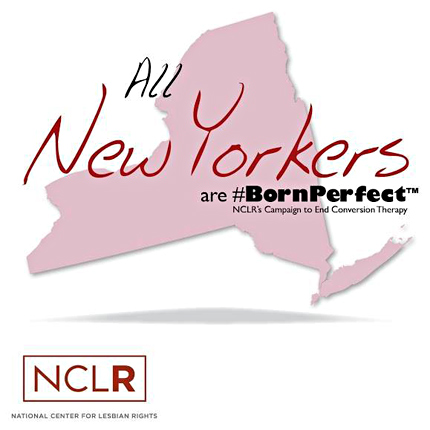 All New Yorkers to be free thanks to Gov. Cuomo’s efforts to en conversion therapy.

The Gov. Efforts to End Conversion Therapy makes NY the 6th Jurisdiction to Pass Such Legislation

NEW YORK—Yesterday, New York Governor Andrew M. Cuomo announced a series of comprehensive regulations to prevent the practice of so-called lesbian, gay, bisexual and transgender “conversion therapy,” which has been deemed harmful to patients by a wide variety of leading medical and mental health professionals. The multi-agency regulations announced that it will ban public and private health care insurers from covering the practice in New York State and also prohibit various mental health facilities across the state from conducting the practice on minors.

“We could not be more grateful to Governor Cuomo for standing up to the conversion therapy industry today and protecting LGBTQ New Yorkers from these dangerous and discredited practices,” said National Center for Lesbian Rights #BornPerfect Campaign Coordinator and Staff Attorney Samantha Ames. “The regulations announced today are historic, not only representing the first time a governor has taken executive action to protect youth from conversion therapy, but also ensuring that protection doesn’t stop when they turn 18. Thanks to the tireless advocacy of survivors, mental health professionals, faith leaders, and youth advocates in New York, we are one step closer to finally closing this cruel chapter of our history. We look forward to other states following Governor Cuomo’s leadership and working together toward the day all LGBTQ children know they were born perfect.”

NCLR has been at the forefront of the fight to end conversion therapy and works closely with legislators and state leaders across the country to introduce bills protecting youth from these dangerous practices, which are associated with extreme depression, substance abuse, and even suicide. Five jurisdictions—California, New Jersey, Washington D.C., Oregon, and Illinois—have passed legislation to protect LGBTQ youth from the practices, with leaders from several other states planning introduction of similar legislation in the 2016 legislative session. In 2014, NCLR launched its #BornPerfect campaign to stop conversion therapy across the country by passing laws, fighting in courtrooms, and raising awareness about the serious harms caused by attempts to change a young person’s sexual orientation or gender identity.

For more information about the dangers of conversion therapy and NCLR’s #BornPerfect campaign visit www.NCLRights.org/BornPerfect.