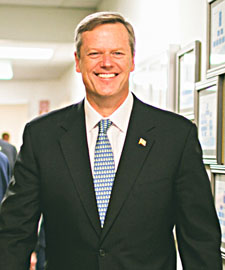 Baker, via a press release, listed a series of reasons and issues why he decided to endorse Christie, calling those accomplishments “serious challenges.” Marriage equality, transgender protections, LGBT adoptions, support of the NRA or the right of a woman to choose weren’t serious challenges that he mentioned. If it had been up to Christie’s convenient flip-flopping views, according to the Human Rights Campaign, marriage equality would have never happened. [pullquote]Given Christie’s track record and his boisterous declarations of opposing fundamental rights and protections for Americans, it questions the very foundation of Baker’s intentions. Specifically in the Commonwealth, Baker and Polito continually refuse to acknowledge the need for transgender protections.[/pullquote]

Massachusetts Democratic Party spokesman Pat Beaudry, released a statement about the endorsement today that echoed with some of the concerns above.

And, like Beaudry, I ponder: what message are Baker and Polito sending to women, gun control advocates, the educational system, Planned Parenthood, and so forth? Is this a subliminal message to them, to us? What does that say about the Baker administration and where their alliances lie?

While campaigning, Baker vowed his support of the gay community, women’s rights, and other considerably “progressive” views. Given Christie’s track record and his boisterous declarations of opposing fundamental rights and protections for Americans, it questions the very foundation of Baker’s intentions. Specifically in the Commonwealth, Baker and Polito continually refuse to acknowledge the need for transgender protections.

Baker and Polito’s position on Transgender public accommodation protections (S. B. 735 and H. B. 1577, and Act Relative to Transgender Anti-Discrimination) are primordial and arbitrary. Simply stated, their current position of transgender rights is grossly outdated. When The Rainbow Times has asked for a statement regarding their position on the issue, they only reply with the same dated quote, over and over again, which states that Baker “prefers the current law regarding public accommodations.” Do they consider this community naïve? What about transgender, LGB and allies? Do they think it doesn’t send a scathing message of their blatant disdain and disregard for the hundreds of transgender residents that lack such protections in the commonwealth? How long is this going to continue to happen before they do something about it, show that they are listening, or pay some attention to the cruel repercussions of their inaction?

“Right now, our country is in dire need of Governor Christie’s tested, and strong leadership,” stated Governor Baker via the release. [pullquote]And, like Beaudry said, what message are Baker and Polito sending to women, gun control advocates, the educational system, Planned Parenthood, and so forth? Is this a subliminal message to them, to us?[/pullquote]

For Christie, Baker and Polito have fresh and zealous comments to make and a strong stance to take—something they lack when speaking of transgender protections on their home turf. Gov. Baker, it is time to join the hundreds of businesses, mayors, law enforcement, higher education, sports teams, Massachusetts residents and more who have shown support for Senate Bill 735, a bill that would update the Commonwealth’s non-discrimination law to include protections for transgender people in public spaces—a bill that would restore Massachusetts’ human rights pioneering reputation in the country.

An endorsement for Christie continues to tell the LGBT community that Baker and Polito still don’t believe that all Bay Staters deserve equal protection under the law. That is an embarrassment for the progressive commonwealth we live in.

*Graysen M. Ocasio is the Publisher of The Rainbow Times.Graysen holds an MBA from Marylhurst University and a Bachelor’s in Journalism from Temple University. He can be contacted at: publisher@therainbowtimesnews.com.