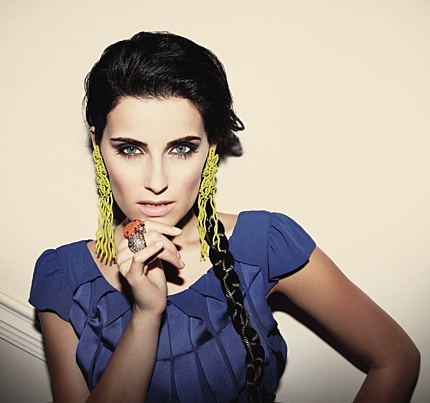 Pop singer on first drag experience, musical ADD and how she’s still like a bird

By: Chris Azzopardi*/Special to TRT–

There’s a story Nelly Furtado likes to tell of her seeing two lesbian teens squeeze each other while crying as she sang “ … On the Radio (Remember the Days)” on one of her first tours. Furtado doesn’t remember the venue. She doesn’t even remember what state she was in. But the emotion that connected all three of them hasn’t left her.

“They were feeling it in a way that I never imagined,” says Furtado, 33. “That really struck a chord with me.”

The same girls would likely find bravado and strength – and maybe even shed a few tears – after hearing the liberation, empowerment and sense of individuality beaming through Furtado’s first English-language studio album in six years, The Spirit Indestructible.

Q. Why has it been so long since you released an English-language album?

A. Getting inspired again, making time for pursuits and hobbies and families and friends, and taking some time out to establish my label Nelstar. Nelstar was the first project I did after Loose. My first signing was a group called Fritz Helder & The Phantoms. We put out their release and did some fun traveling with them and showcases, but eventually they broke up.

Then I launched another album on my label, which was my Spanish album Mi Plan, and I wrote that with Alex Cuba. That journey ended with him winning Best New Artist at the Latin Grammys, and my album won Best Female Pop Vocal Album.

Q. What’s a new hobby that you picked up?

A. Working on my label, more than anything. I’m obviously spending time with my family and enjoying being a mom and doing all the hands-on things that you don’t have as much time to do when you’re traveling around. And I actually picked up basketball! That’s been fun.

Q. What kind of travels?

A. Right before I started cutting some of the record I did with Rodney Jerkins, I went on this crazy tour of national parks and forests of the United States. It was this awesome journey. Sometimes you have to get really unplugged to get inspired. I feel like if you really live your life, you’re going to put all your energy into your songs and your songs are going to feel alive and like they’re living and breathing; if you don’t feel alive, your music’s not going to feel alive. At the end of the day, I want people to press play on that album and really feel like it’s taking them somewhere; like that energy is taking them over. That’s why, I think, I take all these musical detours in my career.

Q. You’ve gone from the pop-folk of your 2000 debut, Whoa, Nelly! to hip-hop on Loose. What about dance music inspired the change?

A. When I was a child, every birthday I would ask for old Casio keyboards and sound-effect machines. I had a collection. I remember trying to sample Billy Joel into my tape recorder from vinyl when I was 4 years old. I was just always obsessed with technology in music. Even when I first moved to Toronto from this small town of Victoria, I engaged myself in the trip-hop and electronica of Toronto. I sang at urban talent shows. I made trip-hop music. I used to cut electronic tracks of my DJ friends in Victoria when I was in college. So it’s been a natural love affair. Although, from time to time, I like to unplug and be like, “Will this song sound good on acoustic guitar?”

Urban and hip-hop music really influenced me a lot as a young teenager, and it’s fun for me. On this new album I’m working with Rodney Jerkins, who produced a lot of my favorite urban tracks as a kid – and I didn’t even know that until I was already deep into the recording process! (Laughs) A lot of really trippy things happened. It was almost like my 14-year-old teenage self, who was already writing lines and songs, wanted to meet Rodney Jerkins but didn’t even know it. Here I am years later working with him and making this crazy urban track that talks about me being 14, putting my big hoops on and my cross-colored jeans.

Q. Would you say your reinventions are more trend-grabbing or musical evolutions?

A. It’s probably a little bit of both, I guess. I have a lot of different sides to myself, and that’s always good. When you have a deep musicality and a real good gauge of a lot of different musical styles and an attention deficit disorder – really, let’s just call it that. I mean, it’s more obvious with each album that I have a bad case of attention deficit disorder. But I am a chameleon. I do gravitate toward things that I like and that I find popular and cool, and I do have a way of blending in. I’ve always been that way, though. I was the kid in school that dressed like a hippie one day, then a rapper the next day and then prep the next day. That’s just who I am.

Q. Will you ever return to the pop-folk sound on Whoa, Nelly! and Folklore that made you a star?

A. People really hold those two albums dear. I just think there’s nothing like your debut. You’ll never be the person you were when you did your debut. There’s an innocence there, a real naivety and a beautiful idealism that’s awesome. And just musically you spend all your time making music and then, when you start making records professionally, you don’t have as much time to explore sounds in music. That’s why I took a break for this album. I really wanted to chill and bring the music back, so I think fans of those first two albums are really going to enjoy this new one, because there’s a lot of breadth to the album musically.

Q. Did you go to any gay clubs as a teenager?

A. Yes! I will never forget coming to Toronto: I was sleeping on my sister’s couch at the age of 17 and my sister took me to this awesome gay club, which was the first time I saw beautiful queens on stage. I’d never seen them before. And I’m coming from Victoria, this little town, and I’m going, “Oh my god, there’s a whole other world out here.” I was transfixed. I remember we’d go to a rave all night and then catch a Greyhound to Montreal and do it all over again. I’d have my bottle of water and just dance all night. It was really about the dancing and getting lost in the music for me. That’s never changed.

I really feel like music can take you places. This was proven to me again when I saw Tiësto play at the Winter Music Conference in Miami about three years ago and, near the end of his set, I actually began to cry because the music was so emotional. It reminded me that dance music, just by itself, can really take you to emotional places. He actually produced one track on my album called “Thoughts.” It’s not typical Tiësto.

Q. What song do you think your gay fans will be into most?

A. I have a really good dance track called “Waiting for the Night” – an ethnomusicology track that’s got accordion and a dance beat. It’s all about this summer I spent in Portugal as a teenager waiting to run into this boy while on the island. It’s just a really fun, upbeat song. “The Most Beautiful Thing” is really special, I think. And “Spirit Indestructible” is all about how strong our spirits are and how we can really conquer anything. Great things have happened in the (gay) community in the last couple of years.

Q. Who’s the closest gay person to you in your life?

A. One of my best friends who I just adore and have known since childhood. He’s a wonderful guy – and a diva in the best way! (Laughs)

Q. Are you talking about more than just earrings with “the bigger, the better” line on the first single from the album, “Big Hoops?”

Q. Are you a size queen?

A. No, no! But no matter what you’re doing – and whether you’re in the bedroom or walking down the street – you’ve gotta have that thing that makes you feel tough and gives you swagger. Whether it’s a hoop or a watch or a special memento, or maybe it’s just the way you did your hair that day – something that makes you feel good. The bigger, the better.

Q. You were like a bird 12 years ago. What animal best represents you now at this point in your life?

A. I’ve really been connecting with eagles lately, because the eagle represents the spirit, so this bird thing just ain’t going nowhere!