BOSTON—Black and Pink Massachusetts will host a legislative briefing entitled “No Pride In Prisons: The Criminalization of LGBTQI People” on Wednesday, June 30 from 2-3:15 p.m. ET. The briefing will be held virtually and is open to the public, who can register here. The State House’s Criminal Justice Reform Caucus, co-chaired by Senator Jamie Eldridge and Representative Mary Keefe, is sponsoring the briefing.

Speakers at the briefing will include three currently incarcerated members of Black and Pink MA, who will make their remarks via pre-recorded video. Other speakers include Senator Julian Cyr (D-Truro), who is a member of the legislative Criminal Justice Reform Caucus and the LGBTQ Caucus, Representative Jack Lewis (D-Framingham), Black and Pink MA Executive Director Michael Cox, Lorelei Lee, co-founder of Decrim MA, and Lana, a formerly incarcerated member of Black and Pink MA. Speakers will detail the need to decriminalize sex work, improve conditions of confinement for LGBTQI people/people living with HIV, and improve the re-entry process for people returning to communities from incarceration.

“During Pride month we gather in solidarity with members of the LGBTQI+ community who have been impacted by the criminal legal system,” said Cox. “Since the 1950s and the days of the ‘Lavender Scare,’ when LGBTQI+ people were fired from their government jobs to police violence that gave rise to the Stonewall riots, and the catastrophic failure of the Reagan and George H.W. Bush administration’s response to the AIDS crisis, LGBTQI+ people have been victimized by their own government. That continues today for incarcerated LGBTQI+ people and people living with HIV who experience violence at the hands of state corrections officials and others who work in the criminal legal system. Pride month is an opportunity to remember our history and recommit to our fight for liberation.” 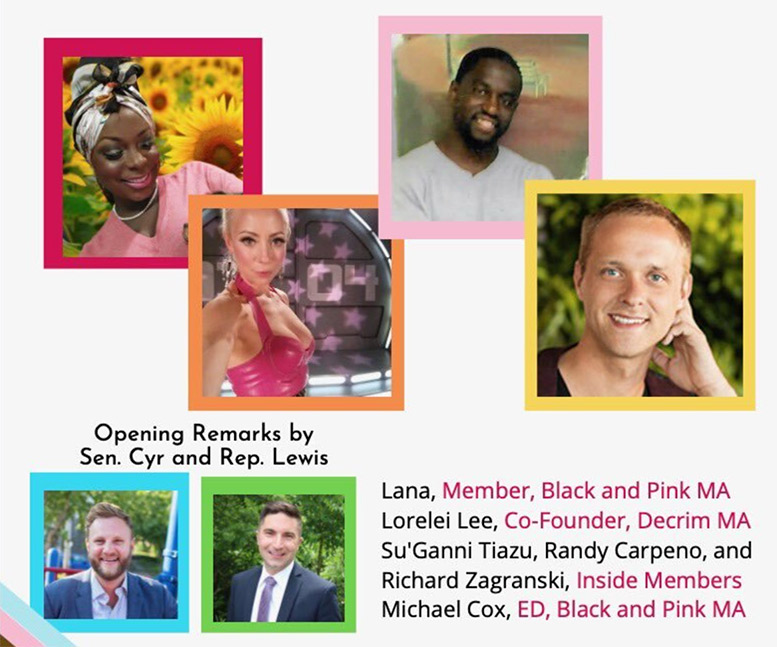 “Too often, the justice system can be needlessly cruel to incarcerated people — and if you identify as LGBTQI+, your experience is likely to be even worse,” said Sen. Cyr. “Imagine the possibility of being housed with someone who is outwardly homophobic or transphobic and potentially wants to harm you, or of being denied life-prolonging medication on the whim of a guard without recourse. I’m honored to join the dialogue on reform with those who advocate for our most vulnerable residents.”

“It is an honor to be working on legislation to combat the homophobia and transphobia embedded in our laws and culture,” said Representative Lewis. “LGBTQI+ people and those living with HIV have the right to be safe and healthy, and our Commonwealth must further strive to better support and protect them.”

Anyone interested in learning more about the criminalization of LGBTQI+ people and those living with HIV is invited to register for this event by registering here.