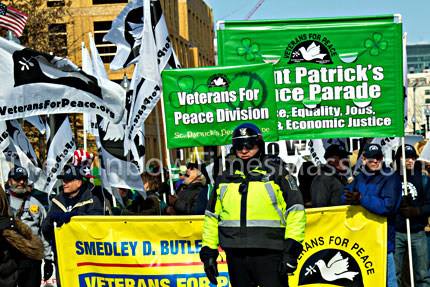 The Veterans for Peace at the 2013 St. Patrick’s Peace Parade in Boston, where LGBT people are also allowed to join, unlike the exclusion of both groups from the “traditional” St. Patrick’s Parade.
Photo: TRT Archives/Sean Sullivan

The exclusion of Veterans For Peace, the LGBT community and other peace organizations from participating in the Saint Patrick’s Day Parade should come to an end. It is time that there be one parade that is open, inclusive and welcoming to any group wishing to celebrate this very special day. It is Saint Patrick’s Day, a celebration of the patron saint of Ireland. Saint Patrick was a man of peace.

The exclusion of Gay, Lesbian, Bi-sexual and Transgendered groups because of who they are is just unacceptable in 2014. Times have changed, the culture has changed, laws have changed, and the neighborhood of South Boston has changed. Many members of the LGBT community currently live, work and worship in South Boston. It is time the Allied War Veterans Council (AWVC) also changes! There is gay marriage in Massachusetts, Don’t Ask, Don’t Tell is history, gay and lesbian men and women serve openly and proudly in all branches of the U.S. military and many have paid the ultimate price in defending this country. Even Pope Francis states, “who am I to judge”. If the Pope can come around so can the AWVC. [pullquote]The reason given by Phil Wuschke, the parade organizer three years ago when asked why the AWVC denied our application was, “They do not want to have the word peace associated with the word veteran”.[/pullquote]

It is true that because of the Supreme Court’s Hurley decision the AWVC has the legal right to exclude any group for whatever reason they choose, no questions asked. However, just because AWVC has the legal right, does not make it morally right. Veterans who have dutifully served this country, peace groups and members of the LGBT community should be able to participate. The Supreme Court also once ruled that slavery was legal. Not the Mayor, or any of the other forty plus non-profit organizations from South Boston has a say in who can be on the streets of South Boston on Saint Patrick’s Day. The City of Boston spends upwards of $400,000.00 in police, emergency and DPW services yet has no say in who can participate in this historic parade to celebrate the patron saint of Ireland.

For the past ten years members of Veterans For Peace have attempted to walk in the Saint Patrick’s Day Parade. As a result of being excluded three years ago (2011), Veterans For Peace applied for our own permit to have a parade, the “Saint Patrick’s Peace Parade”. The first group we reached out to was the LGBT community saying, “you were denied to walk in their parade seventeen years ago, how would you like to walk in our parade. We are proud to have all the major LGBT organizations represented in our parade. Last year our small parade grew to 2,500 marchers, six bands, eight separate divisions (Veterans, Peace, LGBT, Religious, Environmental, Labor, Political, Social & Economic Justice), trollies, duck boats, floats etc. Our parade and it’s messages of peace and inclusion has received an overwhelming positive reception by the residents of South Boston.

Today there are two parades on the streets of South Boston celebrating Saint Patrick’s Day. Veterans of the United States Military organize both parades. As coordinator of Veterans For Peace for the Greater Boston area, as a decorated Vietnam Veteran, as someone who grew up in an Irish Catholic family and neighborhood, seventeen years of Catholic schooling and incidentally born on March 17, it amazes me that I, and my fellow Veterans For Peace members are prohibited from walking in a Saint Patrick’s Day Parade. We, who have served our country honorably, have seen first hand the horrors of war and now work for peace and non-violent means of resolving differences are not allowed to walk in the Saint Patrick’s Day Parade and to have our messages of peace seen on the streets of South Boston. We walk in many parades and only this parade bars us from participating. The reason given by Phil Wuschke, the parade organizer three years ago when asked why the AWVC denied our application was, “They do not want to have the word peace associated with the word veteran.”

This year we propose to have our Saint Patrick’s Peace Parade, at the rear of the first parade, possibly separated by police motorcycles delineating the separation of the two parades. We would prefer not to have any separation, to just be at the rear of the first parade. Together we make one large parade with the street sweepers at the rear. This would certainly assist the police in their work of monitoring the parades in this post Boston Marathon bombing era. It would make it easier for the Department of Public Works in the post parade clean up. It would allow the first parade to maintain its message and allow our parade to maintain our message of peace and inclusion. This inclusion of the Saint Patrick’s Peace Parade at the end of the first parade, essentially making it one large inclusive, open and welcoming parade would certainly signal to all that the two veterans organizations have made peace with each other, that we recognize among veterans there can be differences of opinion, and we have all come together to celebrate Saint Patrick and the proud Irish traditions in a unified inclusive manner. Putting the two parades together would signal to all those watching that the AWVC wishes to rectify the situation and create a parade without controversy which is acceptable to all. It would be nice to see both the old and new Mayors of Boston walk in this year’s parade.

[Sent to TRT as an Open Letter to Bostonians]