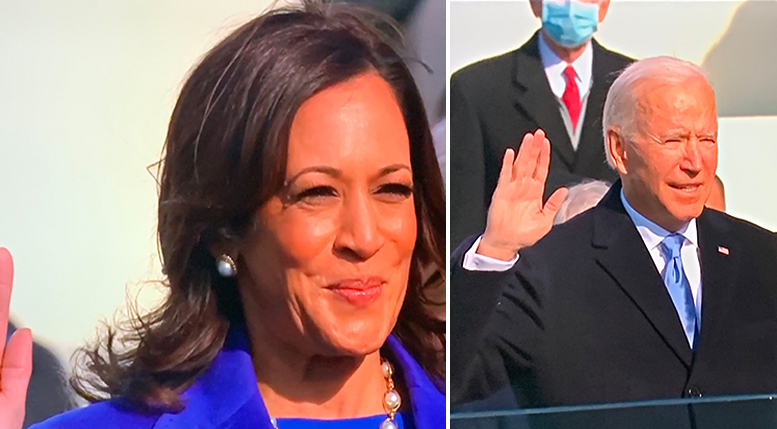 President Joe Biden and Vice President Kamala Harris are sworn in to the nation's highest office on Jan. 20, 2021.

By: The Rainbow Times’ Editorial Team—

A few minutes before noon, former VP Joseph Robinette Biden Jr. and former Senator Kamala Harris were sworn in on the West Front of the U.S. Capitol in Washington, D.C. Biden and Harris are now the U.S.’ new President and Vice-President, respectively.

A little over two centuries after John Adams became the nation’s first vice president, Kamala Harris made history as she became the first African American woman, and the first woman of South Asian descent that has ever been sworn into such a high-profile position in the country — and it was Supreme Court Justice Sonia Sotomayor, the first female Justice of Latinx descent to serve on the Supreme Court, who administered the oath.

At a tumultuous time and inheriting what many have deemed as the most perilous time in modern American history, President Biden took the oath of office today — two weeks after a Trump mob, incited by Trump himself and composed of white supremacists, desecrated Capitol Hill and murdered five people (two of which were police officers) — compassionately but with resolve, promising Americans and the world an end to division and hatred, and a promise of hope for the future.

“Few people in our nation’s history have been more challenged or found a time more challenging or difficult than the time we’re in now,” President Biden said to the crowd and the millions of others around the globe watching virtually from their homes. “Once-in-a-century virus that silently stalks the country. It’s taken as many lives in one year as America lost in all of World War II. Millions of jobs have been lost. Hundreds of thousands of businesses closed. A cry for racial justice, some four hundred years in the making moves us. The dream of justice for all will be deferred no longer.

“We’ve learned again that democracy is precious. Democracy is fragile. At this hour, my friends, democracy has prevailed. From now, on this hallowed ground, where just a few days ago, violence sought to shake the Capitol’s very foundation, we come together as one nation, under God, indivisible to carry out the peaceful transfer of power, as we have for more than two centuries.”

Soothing the nation and the world, Biden assured Americans that unification was key to our collective success.

“We will get through this, together, together!” President Biden asserted during his inaugural speech. “… We will repair our alliances and engage with the world once again. We’ll lead not only by the example of our power but by the power of our example.”

Unlike his predecessor, who broke tradition in most ways and refused to be present at the customary inauguration ceremony, President Biden first recognized and honored the lives lost to COVID-19 through prayer and acknowledgment, something that Mr. Trump never spoke about during his own pandemic crisis and “played down” until the end, as he told award-winning journalist Bob Woodward in February 2020.

“Let’s say a silent prayer for those who lost their lives and those lost behind and those who love their country,” said Biden during that moment of prayer.

The 46th President, sworn in by Supreme Court Chief Justice John Roberts, promised to be honest with Americans, something that was also missing from the Trump administration with the country, with the media, and even with other cabinet officials.

“Before God and all of you, I give you my word, I will always level with you,” said Biden intently.

Joe Biden is sworn in as President of the United States with First Lady Jill Biden by his side.

Biden spoke of change, regardless of how dim circumstances seem at the present time.

“Here we stand looking out in the great mall where Dr. King spoke of his dream,” his speech continued. “Here we stand, where 108 years ago, at another inaugural, thousands of protesters tried to block brave women marching for the right to vote. And today we marked the swearing-in of the first woman in American history elected to national office: Vice President Kamala Harris. Don’t tell me things can’t change.”

And, in terms of working for the new administration, Pres. Biden when swearing-in presidential appointees made sure to say that he would not tolerate lack of human decency toward one another.

“By leading with one core American value, humility and trust … I’m not joking when I say this. If you’re ever working with me and I hear you treat another colleague with disrespect, talk down to someone; I promise you, I will fire you on the spot; on the spot,” said Biden seriously to the appointees ahead of the celebration. “No if’s, and’s or but’s, everybody, everybody is entitled to be treated with decency.”

Former presidents Barack Obama, George W. Bush, and Bill Clinton (with their respective spouses; one of which was a presidential candidate and former Secretary of State, Hillary Clinton) were present at the Inauguration, along with Vice-President Mike Pence, who unlike Trump, opted to follow American tradition.

The Biden team couldn’t get up to speed in terms of the pandemic because the Trump administration did not let the transition begin after Biden was declared president on November 7th, a vote that was ratified by the Electoral College and later certified by Congress. However, Trump’s maneuvers and inability to accept defeat, endangered the lives of hundreds of thousands of Americans who were kept from receiving the COVID vaccine, thus undermining the Biden team’s ability to start working on it and other pressing matters. The virus, under Trump, has already claimed more than 400,000 Americans without counting those who were infected during the Holiday Season and at the Capitol coup attempt by Trump insurrectionists.

The headliners for the inauguration were Lady Gaga and Jennifer Lopez. Lady Gaga sang the National Anthem, Jennifer Lopez performed “This Land Is Your Land”. Later, Garth Brooks performed “Amazing Grace” for those present. There are more inclusive inaugural events planned throughout the day, which include people from every state and territory. A-Listers like Tom Hanks, Bruce Springsteen, Demi Lovato, the Foo Fighters, Justin Timberlake, Tyler Hubbard, Tim McGraw, John Legend, Jon Bon Jovi, Ant Clemons, Katy Perry, amongst others, are all expected to perform at the inauguration concert, “Celebrating America”. And, the Transgender Chorus of LA is also in the line-up. Check below for more information.

And, finally, people of color are back as active members of the U.S. government and as prominent respectable members of society under this administration, and not merely in service positions.

A poem recited and written by National Youth Poet Laureate, Amanda Gorman, titled “The Hill We Climb” written after the deadly Jan. 6 insurrection by white supremacists and incited by Trump, some of his family and enablers, were enough to bring impassioned clarity to the young poet.

Talking to CNN while referencing the insurrection, Gorman explained how the poem came to be.

“We’ve seen a force that would shatter our nation rather than share it,” she told the news station last week. “Would destroy our country if it meant delaying democracy. And this effort very nearly succeeded. But while democracy can be periodically delayed, it can never be permanently defeated.”

Inspired by Harris, Gorman hopes she can, too, one day be at the helm of the U.S. of A.

“We, the successors of a country and a time where a skinny Black girl descended from slaves and raised by a single mother can dream of becoming President, only to find herself reciting for one,” Gorman recited the words from her poem to those present.

Gorman’s poem has begun to be realized, already.

The new whitehouse.gov website has already been updated to reflect that Biden is the new President. In addition, the site goes back to including a Spanish language version of the White House’s communications. “La Casa Blanca’s Spanish language communications went dark in 2017 when Trump took office,” according to a CNN report. Former Presidents Barack Obama and George W. Bush both maintained a Spanish version of the White House website, said Variety.

The LGBTQ+ page, which was taken offline the first day that Trump took office in 2016, will also be back online, according to news reports. As of now, several federal positions have gone to members of the community. Karine Jean-Pierre, an out lesbian and chief of staff for Vice President-elect Kamala Harris, was announced as deputy press secretary. Pili Tobar, a lesbian and an immigration rights advocate and former aide to Sen. Chuck Schumer, D-N.Y., was named deputy White House communications director.

Poised to be the most pro-LGBTQ+ president ever, Biden has promised to restore nondiscrimination requirements for federal contractors, support LGBTQ+ rights in the world and, domestically, sign the Equality Act within his first 100 days in office, according to NBC News. Although the Equality Act passed in the House, it did not in the Senate. The Act would prohibit discrimination based on gender identity and sexual orientation in housing, education, public accommodation, and other sectors.

Biden’s Assistant Secretary of Health will be an out trans woman from Pennsylvania, Dr. Rachel Levine. Dr. Levine is the first openly transgender official appointed in the U.S. to be confirmed by the Senate. In addition, Biden selected gay former ambassador Rufus Gifford for a prominent position as Chief of Protocol. And last but not least, in mid-December, Biden chose Pete Buttigieg as the first openly gay man to be nominated to a Cabinet role, for the U.S. Transportation secretary.

The future for LGBTQ+ rights under the Biden/Harris administration is moving forward with the fulfillment of promises from the just sworn in Commander-in-Chief.

[This story continues to be updated. Check back later for more.]

It's time to DANCE America! From sea to shining sea, Americans everywhere are celebrating the new @POTUS and @VP. #InaugurationDay pic.twitter.com/jNzNwdBQnW

Congratulations, President @JoeBiden and Vice President @KamalaHarris. Democracy has indeed prevailed, the voices of the people have been heard and we march forward working toward progress for our nation. #InaugurationDay

Congratulations, @JoeBiden, on your inauguration as the 46th President of the United States. Our two countries have tackled some of history’s greatest challenges together – and I’m looking forward to continuing this partnership with you, @KamalaHarris, and your administration.

Welcome back America, together we can make the planet great again! 🌷#climatechange #ParisAgreement #COP26 #InaugurationDay

We are drinking Irish whiskey and listening to the Grateful Dead perform “He’s Gone.”#InaugurationDay pic.twitter.com/GIZmdPa42s

The singing was stunning, the poetry transcendent. The arts have played a huge role in helping us get through this difficult year and will go along way towards helping us heal. Let's start funding them accordingly.

The view from my apartment. Excited for the Biden Inauguration! pic.twitter.com/LKK7XZE754

It's morning in America. pic.twitter.com/MG6kom1rWl

Maya Angelou moved us with “Pulse of the Morning” in ‘93 so Amanda Gorman could inspire us with “The Hill We Climb” in ‘21 #fullcircle #Inauguration pic.twitter.com/HRjp4UlfVq

I’m bawling my face off. You can tell he’s reassuring her after the understandably nerve-wracking walk outside the car. We made it! #InaugurationDay pic.twitter.com/98VgG3wxKW

Watch Amanda Gorman, 22, recite her poem “The Hill We Climb” at the #inauguration pic.twitter.com/baZFbAbN0i

BEAUTIFUL MOMENT: After the #Inauguration Ceremony – people in a Capitol Hill neighborhood stepped outside their homes 🏠 to cheer and bang on pots & pans in a socially distanced fashion to express a commitment to unify and heal together. pic.twitter.com/i6GcCaxJn9

I’m almost out of words to describe how I feel as Trump departs the White House for the last time. It’s not elation, funnily enough. Exhaustion? What words do you have?

And at this hour, my friends, democracy has prevailed.”

—@POTUS at the #Inauguration pic.twitter.com/aRrHr1CfT1

History in the making: the @TransChorusLA is the first Trans Chorus to perform at the #Inauguration. 🇺🇸🏳️‍🌈🏳️‍⚧️https://t.co/UNVK297Jnh

President Fitzgerald being part of the Inaugural Parade for President Biden is so…*chefs kiss* #InaugurationDay pic.twitter.com/c0wSNDuGiV