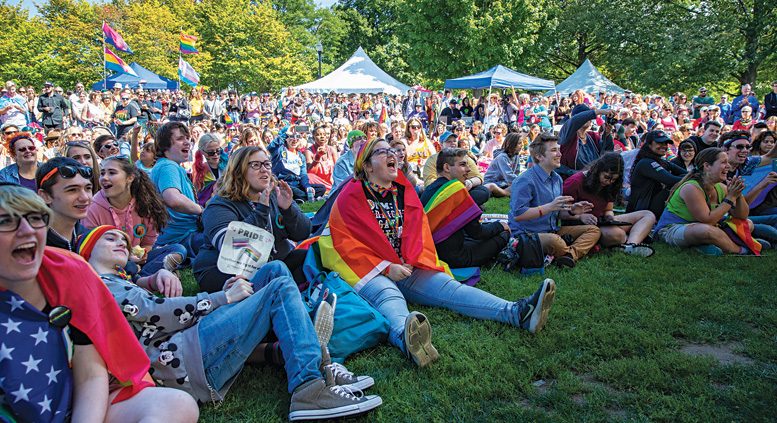 Corporate donors give to anti-equality politicians; time to level the playing field?

The summer of 2019 marks 50 years since the revolutionary Stonewall riots in Greenwich Village, a New York City enclave that saw dozens of LGBTQ people—infuriated by decades of mistreatment by the police, politicians, and popular culture—violently revolting against the mainstream and the violence that colored their daily lives.

Since then, every summer, from June to September, Pride organizations across the nation have regularly held celebrations lauding the bravery and rebelliousness of those pioneers in New York in 1969. The celebrations are expensive with thousands of dollars going into entertainment, food, security, and other logistical costs.

Burlington, Vermont will throw its Pride celebration in early September, and according to Justin Marsh, financial support from local businesses help fund the festivities.

“Although the lack of large corporate funds creates a tighter budget for our Pride celebration, it’s nice to know that the money we do receive is from organizations with local ties that support us by also showing up for us, volunteering, [and] attending our events,” said Marsh, who uses “they” and “them” pronouns and serves as the communications and development director for the Pride Center of Vermont. “While we may not be able to book huge pop stars for our Pride, we are able to support our local talents while keeping ‘dirty money’ out of our Pride.”

The Human Rights Campaign (HRC), a national LGBTQ advocacy organization, regularly publishes a Corporate Equality Index (CEI), that is the “national benchmarking tool on corporate policies and practices pertinent to lesbian, gay, bisexual, transgender and queer employees.” Ranked on a scale from zero to 100, the index provides major corporations with a grade that corresponds to HRC’s estimation of how well the firm treats its LGBTQ employees.

For example, household names like Amazon, American Airlines, AT&T, Walgreens, and Walmart received a perfect score for their LGBTQ-friendly employment policies this year. The 2019 CEI also identified 181 firms across the nation that support The Equality Act, a sweeping federal bill that, if passed, would provide civil rights protections for LGBTQ people in the workplace, public settings, and housing. The bill passed the House of Representatives in May.

While the CEI provides a metric to assess how corporations treat their LGBTQ employees, the index doesn’t measure whether those firms are consistent in their support of the rights of LGBTQ people. An area that isn’t taken into account is whether these corporations spend their money in accordance with their LGBTQ-friendly values.

“While the CEI captures LGBTQ-inclusive policies, practices, and benefits, there isn’t a one-size-fits-all way to consistently score companies on the scope and impact of their political donations,” said HRC Press Secretary Sarah McBride in a statement e-mailed to The Rainbow Times.

Millions of dollars are pumped into state and federal elections and there are several adamantly anti-LGBTQ politicians whose campaigns have benefited from corporate donations; several of these firms tout themselves as supportive of LGBTQ people.

“We do monitor employers’ contributions to anti-LGBTQ ballot measures and organizations whose primary mission includes anti-LGBTQ advocacy,” continued McBride’s statement. “It is important for reporting like this that asks tough questions of corporations and brings these donations into the public discussion. The Corporate Equality Index is a critical tool for advancing LGBTQ equality in the workplace, but it is not the only tool.”

HRC maintains a separate public listing of politicians who seek to limit or dismantle, the rights of LGBTQ people, which it calls The Congressional Scorecard.

Christine Allsopp of the Stonewall Warriors, an LGBTQ rights group that has vehemently protested the participation of corporations in Pride festivities, told The Rainbow Times in 2017 that the inclusion of these firms serves as an injustice to the original spirit of Pride and the Stonewall rebellers of 1969.

“Those sponsorships really sully the memory of what those people did for our rights, for my rights,” she said. “Regardless of how many there are or what percentage of them are in the parade, it still sullies the memory … ”

Nathan Heathman, a Black and Indigenous person dissatisfied with what he believed was the corporatization of Pride, also said that corporate funds donated to Pride organizations was a disservice.

“This was originally something for the QTPoC community,” Heathman also said to The Rainbow Times in 2017. “It was very much just a community-oriented working-class type of thing, and it’s gotten co-opted by politicians and corporations, and all kinds of people who don’t understand the roots of the movement. It hasn’t become as much of a political statement, as much as a parade.”

What happens when corporations publicly support the rights of LGBTQ people while donating millions of dollars to anti-LGBTQ candidates?

With plans to relocate its headquarters to Boston, General Electric (GE) is a $70 billion conglomerate that serves as a major player in the aviation, healthcare, and renewable energy industries.

GE received a perfect score on the CEI in both 2018 and 2019, but its donations to anti-LGBTQ politicians numbers in the millions.

According to Popular Information (PI), a progressive watchdog publication, the corporation donated nearly $1.4 million dollars to 97 anti-LGBTQ politicians running for office between 2017 and 2018.

The Center for Responsive Politics, a watchdog thinktank, maintains a website that monitors corporate donations to candidates for office. According to the center, GE donated $14,500 to the campaign of Georgia Rep. Karen Handel, whom HRC gave a zero on its current Congressional Scorecard and who “laughed at” the thought of supporting marriage equality and same-sex couples adopting children in 2010.

General Electric did not respond to requests for an interview.

“This analysis is a sober reminder of why our work at the Massachusetts LGBT Chamber of Commerce is so important,” said Grace Moreno, executive director of the Massachusetts LGBT Chamber of Commerce (MALGBTCC), a group of LGBTQ business owners in the Greater Boston area. “We are working each day to identify the barriers that the LGBTQ community faces and to demonstrate how corporations can make changes to level the playing field.”

The United Parcel Service (UPS) is also one of HRC’s “Platinum Sponsors” while Pfizer is listed as one of its “Gold Sponsors.” HRC did not respond to a request from The Rainbow Times for the exact donation amounts for the Platinum and Gold corporate sponsorship levels.

Moreno said that the MALGBTCC was formed knowing that conflicts like this would inevitably arise.

“We began our work knowing that the only way we were going to be able to move the needle on the growth of LGBTQ+-owned businesses and on opportunities for LGBTQ+ professionals was to partner with some of the biggest players in our country’s [more than] $20 trillion economy,” she said. “In doing so, we anticipated that there would sometimes be conflicts between the support they give us and our membership and the support they might give others that do not keep with our mission.”

According to PI, AT&T, an international telecommunications firm providing telephone services to more than 150 million people, donated approximately $2.7 million to 193 anti-LGBTQ politicians from 2017 to 2018.

Former presidential candidate Rep. Ted Cruz from Texas received $19,752  from AT&T in the 2018 election cycle. The current Congressional Scorecard gave Cruz a zero. Cruz was a high-profile supporter of the First Amendment Defense Act (FADA) in 2018, which sought to provide legal protections for businesses that discriminate against LGBTQ people on the basis of religion.

Arizona Sen. Jeff Flake received $10,500 from AT&T despite receiving a “12” on the Congressional Scorecard, which ranks politicians on a scale from zero to 100. The senator has consistently voted against providing protections for LGBTQ people.

The Rainbow Times also sought comments from AT&T and cable television and internet provider Comcast but did not receive responses from either business.

An Issue of Pride

“I’m not surprised these corporations pink wash themselves to consumers while supporting anti-LGBTQ politicians,” said Michael Cox, director of policy for the Boston chapter of Black and Pink, a national prison abolition group that has been a long-time critic of corporate sponsorship of Pride festivities. “At the end of the day, corporations care about their bottom line and will do whatever they need in order to grow their revenue.”

Cox added that Black and Pink does not accept corporate sponsorships, but that if it did, it “would certainly do a background check on their political contributions and impact on human rights.”

Marsh of the Vermont Pride Center said they are disappointed to learn of the corporate trend of donating to politicians who do not support LGBTQ people.

“On a national level, though, personally I feel disheartened when a large corporation gives to an LGBTQ organization and turns around and gives to an organization or candidate that’s anti-LGBTQ,” they said. “It [furthers] the ethical corruption of many large organizations and [shows] that their support is deceitful, weak, and a demonstration of simply pandering to the queer community and their allies.”

Marsh admitted that a local AT&T store in Vermont made a $100 contribution to march in the Burlington Pride parade.

Moreno said that the Chamber of Commerce has actively emphasized the power of the everyday citizen in effecting change when it comes to holding corporations accountable.

“We believe that our community needs to continue to be involved in the civic responsibility end of our country’s political process, in order to make people in power more supportive of the LGBTQ+ community,” she said. “Once people are in power, it is more productive to work with them and all of their conflicting interests and ideas.”

By way of example, Moreno highlighted MALGBTCC co-sponsor Pfizer, a pharmaceutical company with a long history of perfect CEI scores, but, according to PI, has donated close to $1,000,000 to 52 anti-LGBTQ candidates.

Anna Hoff, sponsorship coordinator for Northampton Pride, said she was disappointed to learn that major corporations are obstructing true equality through their political donations.

“Corporate sponsorships are often heavily relied upon in order to put on [a] large scale—and subsequently expensive—Pride celebrations,” she said. “Oftentimes it is necessary to seek out funds from these big businesses to support our own platform and financially back events that promote LGBTQ causes and endeavors. It is disheartening, to say the least, to learn that some of these companies would also fund anti-LGBTQ entities or materials. Any promotion that directly conflicts with the message of acceptance, inclusion, and celebration of the LGBTQ community would seem to be a roadblock in our ongoing mission of love, unity, and equality.”

“Partnering with corporate sponsors creates a mechanism whereby Pride can educate and train the company to be a better employer or a better ally to its queer customers,” he said in the piece. “HRC’s CEI can be leveraged as a roadmap to perform this work and to yield tangible, positive outcomes for LGBTQ workers and for our community.”

However, Marsh suggested that truly healthy, uncompromised partnerships between the community and businesses are rooted in local connections.

“One of our largest corporate sponsors is Hannaford Supermarkets,” they said. “We work directly with the local branches and regional managers to create a partnership that extends beyond simply financial giving. We work together to best match which programs within our organization will benefit from their funding and curate unique opportunities for their company to be involved with the Center.”