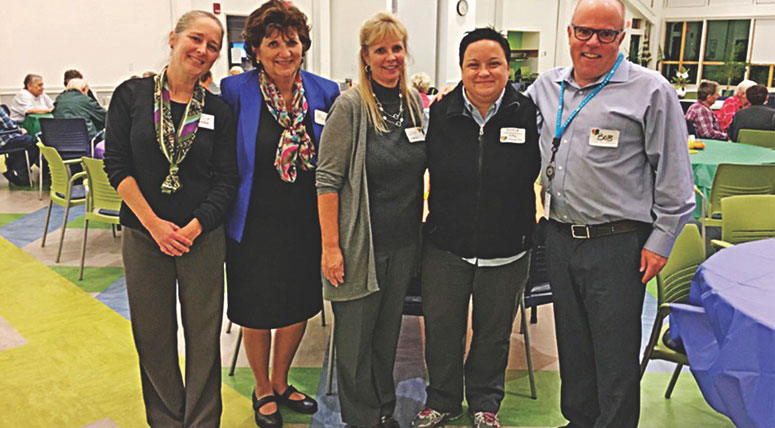 HOLYOKE, Mass.—In November, WestMass ElderCare Inc. in Holyoke held a dinner that was the first of its kind in Western Massachusetts: a supper club for LGBTQIA seniors.

Seniors in the Greater Boston area have had the pleasure of attending a few different meal clubs for years, but the farthest west that one can be found was Worcester.

Now, WestMass ElderCare and the Holyoke Council on Aging, both service providers for the elderly, have teamed up to put on a monthly dinner to reach out to LGBTQIA seniors who they feel haven’t been fully included or acknowledged. The goal is to make a space for the LGBTQIA seniors to meet and network, but also to make sure they are aware of the services that can be provided to them by different programs within the Holyoke Council on Aging and WestMass ElderCare, according to the executive director of the Council, Navae Fenwick Rodriguez.

“I took over here as the director two years ago and [I’m trying to make the] senior center a more inclusive space,” Rodriguez said. “We want to make sure to reach every [LGBTQIA] senior in the community.”

According to Bob Linscott, the assistant director of the Fenway Health LGBT Aging Project, the Holyoke supper is the 17th LGBTQIA senior meal club to open in Massachusetts. Linscott worked with WestMass ElderCare in setting up the event and gave a training to their staff about LGBTQIA senior outreach, but emphasized the fact that being number 17 was long overdue for Western Massachusetts.

“I showed them all a map from the Williams Institute about where same-sex couples are in the state and there’s a huge concentration in Western Massachusetts, and then I overlaid it with the map of where the meal centers are and all the meal centers are clustered around Boston,” Linscott said. “But there was nothing out there where this big pocket of LGBT folks are so to have this meal site that’s catering to this whole Western Massachusetts area is fantastic.”

These meals are important for the LGBTQIA senior community, Rodriguez pointed out. Many LGBTQIA elders feel alienated from the mainstream elderly population and many seniors don’t feel as comfortable coming out.

“I know that coming out 60 years ago was a lot different than it is coming out now,” Rodriguez said. “Many didn’t ever come out and I think to a certain extent some of the stigma around that has been a part of their life experience. I think they live with the residual effects.”

Priscilla Chalmers, executive director of WestMass ElderCare, pointed out that these meals will go beyond simply creating a safe space for these seniors.

“This is another effort to reach out and serve an underserved population among this age group that have found themselves isolated and through the cooperative effort we have with the Council on Aging we believe that if all goes well, we will reach individuals that the senior center may have not reached through the regular daytime programming that they have at the senior center,” she said.

In reaching out to these communities, they hope to be able open up new doors for these seniors that they may not have known existed. They had previously put on a meal for Latinx (pronounced Latin x)  seniors at a Latin American restaurant in Holyoke that Chalmers said was effective in getting more people to sign up for their meal delivery service, attend events at the senior center, and get involved with other at-home living assistance that they previously didn’t know was available.

In the case of Dorothy Martin, they already have. Martin is from South Hadley and attended the event with her wife. The next day, the two of them joined the Holyoke Senior Center.

“It was really nice and very friendly,” Martin said. “I think this is more exposure in a different way. It’s not like a gay march, it’s just a matter of people being together and feeling like it’s okay to be open and be who you are.”

Martin affirmed the hardships experienced by LGBTQIA seniors who are not out. As a representative for the South Hadley Council on Aging, the subject of the supper club was brought up at a meeting and others voiced their beliefs that an LGBTQIA community doesn’t exist within the elderly community, despite Martin, a married senior lesbian, being at the meeting.

“They’re a group of people that have been sort of neglected particularly because elders in our age group had been hiding for so long,” she said.

Because of this hiding, Linscott acknowledged that having the event late in the evening would make it more amenable for seniors to show up because the center would be empty at that time. For other LGBTQIA meal programs, he said that some seniors would go to ones in neighboring towns to avoid being seen at an LGBTQIA event in their own community, but with the next closest club being in Worcester, there isn’t much of an option but to attend the Holyoke one.

A total of 35 people attended, according to Chalmers, a number much higher than they had expected.

But, as Holyoke City Councilor Jossie Valentin pointed out, one group was not present at the event and that was the Latinx LGBTQIA seniors. This is something Valentin personally wants to make an effort to change given the population of Holyoke is 50 percent Latinx.

“I’m making it a point to reach out to some of my fellow elected officials in Springfield to spread the word and get more Latinx seniors at this event,” Valentin said.

Chalmers and Linscott also expressed that they want to get more of this community involved and make it a genuinely multicultural event. The WestMass ElderCare website is already available in Spanish and Polish, but staff plan to print fliers specifically for the LGBTQIA supper club in Spanish as well and present them at the Latinx seniors meal club. Another effort will include providing bilingual staff members at events.

Besides welcoming Latinx LGBTQIA seniors to the meal program, everyone involved has expressed increasing the number of overall attendees in the coming months.

“That room holds 240 people and I would like to see it packed for the rainbow supper club,” Rodriguez said.

To accomplish this, the organizers will conduct needs assessments to gauge which attendees need transportation to the events. The assessments will also inquire as to what kind of educational and entertainment activities seniors are interested in. The goal is to make sure this community has somewhere to turn to.

“[W]ith everything that happened … with the election, it’s critical to have a safe space where folks know that they can be welcomed and treated with dignity and respect,” said Linscott.