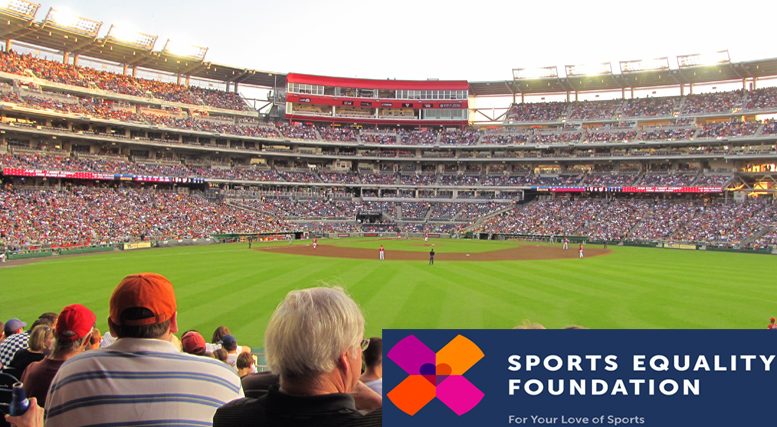 In a career spent chronicling the lives of LGBT athletes, Cyd Zeigler has discovered one consistent thread: Coming out empowers others to do the same.

“No matter what the level, when one person comes out, other people follow,” says Zeigler, co-founder of the Outsports website. “And that leads to very definite changes in their sport.”

In fact, Zeigler adds, the act of coming out trumps everything else being done in the LGBT sports world. “Sensitivity training, awareness campaigns—nothing else compares to the power of coming out.”

But over the years he noticed that despite the good works and strong efforts of a variety of LGBT sports organizations, no one was working in that space. “There seemed to be a lack of heart in pushing more people to come out,” Zeigler says.

Last summer in Provincetown, Zeigler chatted with Patrick Davis. The CEO of Ben Cohen Worldwide—which manages the StandUp anti-bullying foundation named for the rugby World Cup champion—was looking for new projects. Zeigler mentioned the importance of coming out as an empowerment tool.

The pair got to work. February marked the official launch of the Sports Equality Foundation. Focused solely on the mission of helping LGBT athletes come out, the organization is funded with a $100,000 commitment from the board.

Davis is one co-chair. Kathleen Hatch—former president of a collegiate recreation association—is the other. The board includes Zeigler; out high school basketball coach Anthony Nicodemo of Yonkers, New York; openly gay UCLA softball coach Kirk Walker, and Alison Doerfler, executive director of the Hands On Network.

The foundation’s board is aided by a list of high-powered advisory members, including openly gay NBA basketball player Jason Collins; Major League Baseball’s first ambassador for inclusion Billy Bean; trans sportswriter and activist Christina Kahrl, and Connor Mertens and Brian Sims, who came out to their college football teams.

From the moment the Sports Equality Foundation was launched, Zeigler says, “people got it.” From Fortune 500 corporations offering assistance to high school athletes saying “wow!” people realized that “this is the key that unlocks the door, in sports and society.”

Zeigler reiterates that the foundation’s work will focus on concrete measures that help LGBT athletes come out… and stay out.

“We’re not going to be putting out training manuals or making video campaigns,” he says. “Other organizations are doing that. That’s their space, and we won’t step on their toes.”

Instead, he says, the Sports Equality Foundation will fund projects like their first one. In April, MLB holds its annual Diversity Business Summit in Phoenix. The two-day event brings job seekers together with major and minor league club owners and executives. The goal is to help members of minorities find jobs in baseball front offices.

“It’s so important to place people who are already out in settings where they can be out and effect real change,” Zeigler says.

The expense of the summit is beyond many young job seekers. So the foundation will fund travel for a dozen LGBT students and others. That’s a concrete example of the type of action the Sports Equality Foundation plans to take.

Another is funding equipment needs. Amateur athletes—even pros—often spend thousands of dollars on things like skis and bicycles. If the foundation can help with those expenses, openly gay sports figures can concentrate on training and competing. And by being out and successful, they can serve as important role models for others.

The universe is enormous. The Sports Equality Foundation will help any out (or coming out) LGBT athlete, from youth and high school to college, pro and recreational. The level does not matter. Realistically though, Zeigler says, because of ages, stages in life and numbers, much of the organization’s work will probably do with college athletes.

Zeigler has been heartened by the strong response following the foundation’s launch. On the Monday before the Super Bowl, the owner of Hi Tops—a San Francisco gay bar—asked if he could hold a fundraiser. Four days later, the place was packed. Michael Sam and Rick Welts (openly gay president of the San Francisco Warriors) stopped by.

The Sports Equality Foundation may be on to something big. There is a place in the LGBT sports world for education and advocacy. But there’s also a place for the simple act of coming out—and then being out.

“Sports is an important key to unlocking minds and hearts in our shifting culture,” co-chair Hatch says. “The coming-out cycle perpetuates itself and drives broader cultural change. We have a deep belief in the incredible power of the individual.”