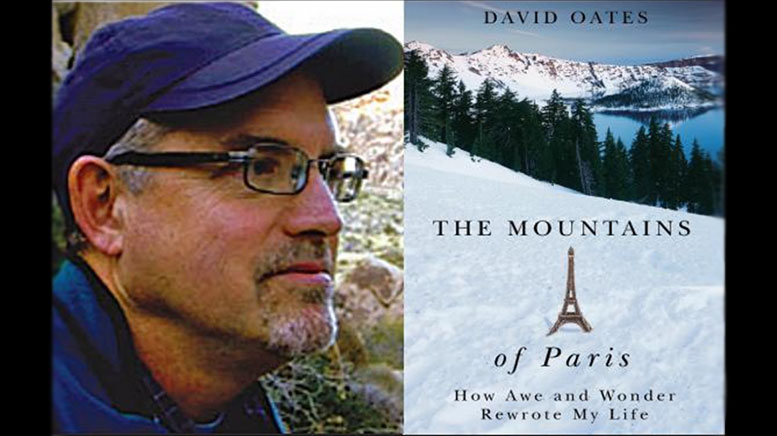 An introspective examination on how travel and the great outdoors’ healing power can uplift LGBTQ people in times of need; and a Book that was born out of it

Similarly to many in the LGBTQ community, author David Oates experienced first hand the painful rejection of “coming out.” Soon after, however, he realized how travel and the awe of the great outdoors could be transformative during tumultuous times. He fled his home, crushing dullness of routine and religious condemnation, and began his journey—mountaineering abroad.

“The ‘God’ I had from my evangelical church hated me,” Oates told The Rainbow Times. “I was the gay kid in the Baptist pew, and it seemed that no amount of devotion or sincerity could compensate for my innate contemptibleness. It ate me up with grief, loneliness, and self-loathing.”

Little did Oates know that his self-loathing was about to be deconstructed on a trip to the mountains.

“What saved me,” an ironic word Oates notes, “was the High Sierras, where I got a college summer job taking at-risk kids up into the mountains. It was a shoestring operation, but we did some serious work!”

An answer to defeating his internalized homophobia, sparked by his religious upbringing, slowly began to reveal itself to the writer.

“I got to spend months clambering peaks and hiking remote forests and waiting for the next group to show up,” Oates recalled. “Spending a couple of days at a little glacial tarn, say, at eleven thousand feet, with peaks on three sides and a near-infinite view on the other. Quiet time in places like this … nights under the sky …  patience and kindness from the other young men and women who were my co-workers—these began to construct an answer to the self-hating defensiveness and hiding I’d trained myself into.”

An accomplished author of five nonfiction books and two of poetry, Oates has recently released The Mountains of Paris: How Awe and Wonder Rewrote My Life. In it, he explains how societal pressure, in addition to religious shame and shunning, transported him to a place whose views and grandness peacefully merged to give him the clarity he needed.

“I begin my story at a very low point in my life—the struggle in my first year away at college. I had walked all night, weeping and praying to God to change my ‘sinful’ queer self,” reflected Oates. “Around dawn, something else spoke to me. It was wordless. Huge. Beautiful. I looked from a bluff over the ocean and saw, not God’s wrathful condemnation (which I believed in, fervently), but instead—just the light of the horizon. A few stars still visible. Rocks and surf seething far below me. The wideness of the world, that made my agonizing over points of doctrine seem petty and unimportant.”

“Coming out? In some way the preparation for it was this coming-in: Becoming at peace within myself,” he said. “I came to see that I was not separate from this universal pageant of scale and beauty, but clearly just another part of it. Not perfect; very small indeed; but worthy of participating in the world just like any other part of it. Made small, I grew. Coming out was relatively easy after that. When your feet are securely planted, you can’t be shamed by narrow doctrines and hateful people.”

Oates is onto something.

According to several articles and journals published about the impact of traveling and spending time in nature, such time can lead to restored mental energy and clarity, decreased stress, improved mental health, reduced risk of early death and countless physical benefits like the potential to reduce the risk of cancer and boost the immune system, Business Insider reported.

“In this book, I follow that lead … and it takes me everywhere,” Oates said. “Nature. High peaks. Cities full of culture. Music. Art. Poetry. And the love I share with my dear companion—twenty years and counting.”

Malcolm René Ribot, commonly referred to as the FTM Traveler and a man of trans experience, shares Oates’ conclusions about the healing aspects the wild can bring into someone’s life.

“Nature can absolutely be incredibly healing for the soul—generally throughout life, and in my experience, especially through transitioning and/or coming out,” Ribot said to The Rainbow Times. “I personally feel at peace there. Nature doesn’t judge me. Nature doesn’t judge any of us, nor cares in which ways we dress, express, or even relieve ourselves when ‘nature calls.’ It’s where I feel free simply just to be. To exist as I am.”

“This consciousness of the deep, wild spirit of the cosmos is our birthright, I think, like the right to breathe or the privilege of simply existing,” Oates said.

During his travels, Oates discovered two characteristics of human existence.

“I’m convinced that our common humanity rests on two realities: The experience of suffering and the experience of awe,” he said. “Suffering is the price we pay for being human. But the story of being human, I think, must include the dimension of awe. For here we meet each other in a big space, full of indescribable potentiality. Art, music, poetry, nature—here, we are reminded of our strange, almost limitless capacity for awe, and thought, and creativity, and compassion. My premise is that these experiences are a central part of what makes us human.”

This dual commonality is particularly relevant to the LGBTQ community, Oates explains.

“Because awe and wonder are a universal answer to the narrowness and rejection we have so often experienced. Because in this answer we are invited to become our best selves, freed from reaction and the resentment of remembered hurts,” he pondered. “Liberated instead into an ennobling space, literally limitless! And, full of compassion and awe.”

As for Ribot, he uses the great outdoors to ground himself.

“It’s where I go to reconnect with myself, recharge, and ‘refill my cup’ so to speak,” Ribot added. “It’s where I know I can go to reflect and breathe and clear my mind. Whether I’m discovering incredible landscapes or waterfalls, summiting a mountain, swimming in a tucked away swimming hole or enjoying natural hot springs, or even sitting on a hill or in a field in the grass or by the water in a local park—listening to the sounds, taking in the smells, breathing in the fresh air.”

To learn more about Oates’ journey to self-discovery and finding inner peace, check out The Mountains of Paris: How Awe and Wonder Rewrote My Life on Amazon, OSU Press and other online book vendors.