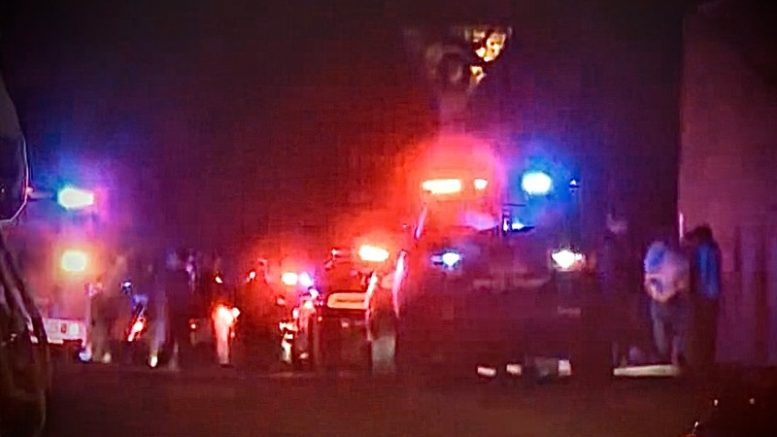 As the scene unfolded at Club Q in Colorado; Photo: KKTV/YouTube Shot

Club Q Shooting Took The Lives Of At Least 5 People, 25 Were Injured

By: The Rainbow Times’ Management—

The Rainbow Times’ management condemns the LGBTQ+ shooting at Club Q in Colorado Springs, Colorado. We further thank those who brave patrons who subdued the gunman, preventing him from taking the lives of more people.

If it weren’t for the courageous actions of those same club goers, more people from our community would have perished. Thankfully, the shooter was quickly restrained and a few minutes later, apprehended by the police. And, it doesn’t go unnoticed that this mass shooting happened on Transgender Day of Remembrance, TDOR, when we already continue to mourn the transgender lives lost to senseless acts of violence every year. And, it made us remember Pulse Orlando. How can we forget?

Club Q, via a FB statement, said it was “devastated by the senseless attack on our community. … We thank the quick reactions of heroic customers that subdued the gunman and ended this hate attack.”

Words are a conduit. Words can be used as tools to shape ideas, educate, or to nurture the mind and soul (among other things). Their significance or lack-there-of leaves a mark in someone’s life. Often, words, in the form of emotional abuse, are considered more harmful than the physical abuse itself.

Representative Alexandria Ocasio-Cortez swiftly used words, too, to tell GOP members to “connect the dots” because their words, indeed, had had consequences on the communities they demonized.

After Trump elevated anti-immigrant & anti-Latino rhetoric, we had the deadliest anti-Latino shooting in modern history.

And now after an anti-LGBT+ campaign, Colorado Springs.

When you tell someone you dislike x group of people or that you don’t think “being gay” is ok, you are using hate words that, heard by the wrong person, could turn into a crime like this and many other mass shootings prior to this one. This happens across the board with minority groups and to gender, racial, ethnic, and other minorities. When you tell someone you “tolerate” LGBTQ+ people, you’re really saying you exist with them (us) because you have to. Apply that to the group/s you identify with and see how it sounds to you. For instance, “I tolerate white people” or “I tolerate white men.” Is that insulting to you? Does it sound wrong and biased?

Likewise, AOC replied to a tweet from Colorado Rep. Lauren Boebert about the shooting. And, we could not agree more with her.

.@laurenboebert you have played a major role in elevating anti-LGBT+ hate rhetoric and anti-trans lies while spending your time in Congress blocking even the most common sense gun safety laws.

You don’t get to “thoughts and prayers” your way out of this. Look inward and change. https://t.co/mxt6wFMVEv

Words Kill. As weapons do in the wrong hands, words send direct and hate-filled messages to those listening. LGBTQ+ youth have one of the highest rates of suicide and it isn’t because they can’t live with themselves. They want to thrive and be true to themselves and who they are. When J.K. Rowling spews her hatred online, she does so knowingly. She dehumanizes transgender women. Transgender women of color are killed at disproportionately higher rates than any other group in the United States. She knows that. Yet, she still deprives them of humanity. Donald Trump did the same and, like them, so have others.

When you use a podium, a bully pulpit to deprive transgender people — or people from other groups — of humanity, for example, you are murdering them too. When someone picks up a weapon and, due to those same words used by public figures, murders transgender women of color — adding another layer of prejudice — they are guilty of it too. Although they are not the perpetrator, they are the instigators, feeding their followers lies. As we know through the 2016 election and the cults that have formed around us, people don’t often do their due diligence to educate themselves about issues affecting others. They take people’s words alone as factual information. And, they act on it. They murder.

As journalists we deeply believe in the freedom of speech and, of course, the freedom of the press. However, given that such speech often kills, perhaps we need to redefine what exactly free speech is and what it is not. Equally important is education. People also murder because they fear — and they fear the unknown. But, not knowing isn’t an excuse for taking a life. Period.

We mourn the five lives lost and stand in solidarity with the patrons of Club Q, victims and survivors, and their families and friends. We hope that those we turn to and elect, enact laws that protect us and do so with the knowledge and within the right context and circumstances that situations like these acts of hate demand.