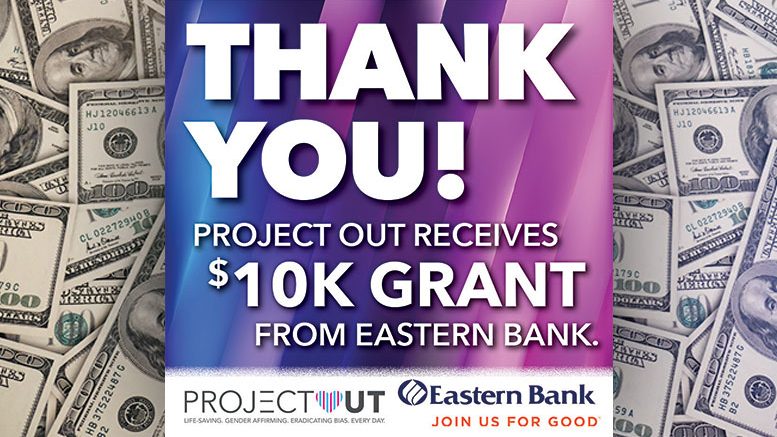 SALEM, Mass.—Project Out, Inc., a 501(c)3 organization, has received a $10,000 grant from Eastern Bank to support its gender-affirming and community education programs, according to the organization’s spokesperson.

“We are immensely grateful to Eastern Bank for their ongoing philanthropic work in the LGBTQ community and their dedication to supporting Project Out’s mission and programming to serve our transgender and non-binary community,” said Graysen M. Ocasio, Co-Executive Director of Project Out.

The nonprofit was founded in April 2018 and launched in Salem, Mass. shortly thereafter.

“Project Out was established with a two-fold purpose—to assist the transgender and non-binary community in achieving authentic daily living while at the same time, eradicating bias existing within the non-transgender (cisgender) community through education and training initiatives,” explained co-founder Nicole Lashomb.

As the demand for Project Out’s services surged, Lashomb and Ocasio reached out to Eastern Bank for support.

“I was very impressed with the mission of Project Out when I heard about it from Nicole and Graysen,” said Eastern Bank Charitable Foundation President & CEO Nancy Stager. “It is an important resource for the community.”

Project Educate, the organization’s comprehensive training program, affords Project Out the ability to provide direct assistance to trans individuals while educating mainstream audiences on how to properly engage and interact with trans and non-binary people in an affirming way.

“The health and support of transgender individuals cannot be achieved without involving the greater community,” Ocasio said. “Too many times, trans and non-binary people do not receive the necessary support to be able to live each day authentically and safely. Part of that support and safety is to be accepted by mainstream audiences and society, in general. Through Project Educate, we seek to change that.”

“We have several organizations and businesses already on our schedule that recognize the critical importance of being able to interact in an affirming way with trans and/or non-binary individuals,” Lashomb said.

Currently, Project Out is booking training sessions into February 2020.

“It really does come full circle,” Lashomb said. “Once a business or organization has completed our training program, they are added to our referral database. At that point, Project Out will be able to confidently refer trans and non-binary people to those organizations for services and/or products.”

Board member Jeff Cohen underscores the importance of funding and the reality that many organizations serving marginalized groups encounter.

“With the Federal government being less supportive financially of non-profits generally, the small pot of funding available becomes more competitive and marginalized communities are even more disadvantaged,” Cohen said. “It’s wonderful that Eastern Bank recognizes the importance of education and we hope other institutions will follow suit to support the necessary programs such as Project Health and Project Educate.”

Through its trans-specific programming—Project Health, Project ID, Project You and Project Work—the non-profit provides funding for medical co-pays and other financial assistance such as transportation to medical appointments.

“Transitioning can be very expensive,” said Lashomb. “We have seen a very real need for the trans community to receive financial assistance and support to be able to transition safely and affirmingly. The services we provide can be life-saving.”

“I will never forget our first client,” said Lashomb. “After waiting five years to begin hormone therapy, he went to the pharmacy to pick up his prescription. Unfortunately, it carried a co-pay that he could not afford. He had to leave the prescription behind. Within a couple of days, we contacted the pharmacy, paid for his co-pay and he began treatment.”

In the client survey, the young man wrote, “I was feeling down and not well. After [Project Out’s assistance], I felt I had a reason to go on,” Lashomb said.

“That is exactly why we do the work we do,” Ocasio added. 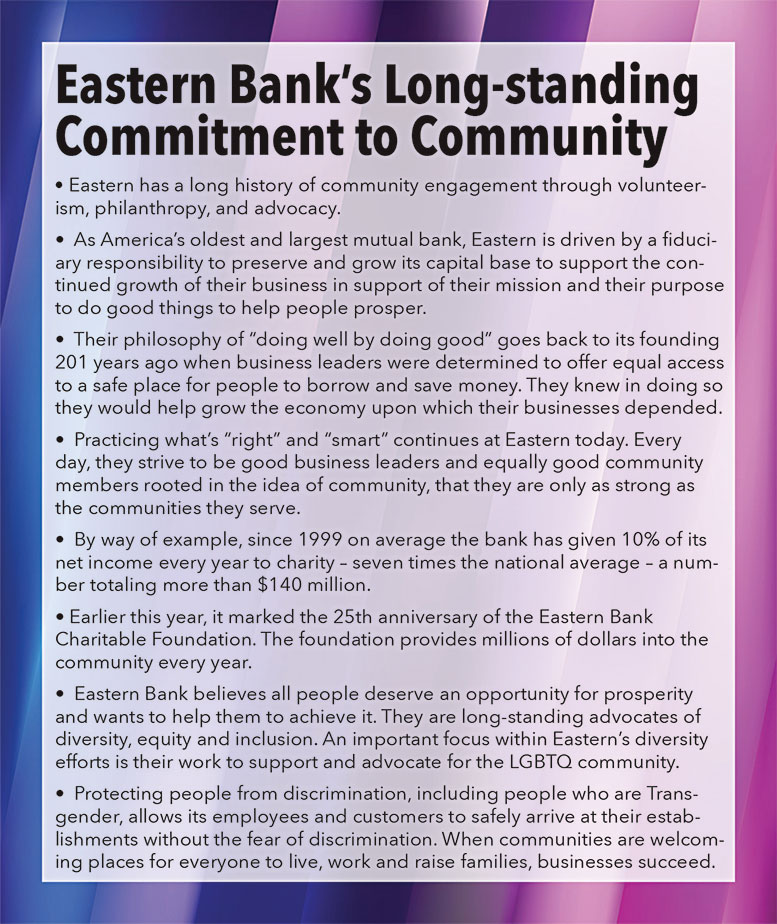 “Trans communities only received 0.015 percent of all foundation funding, or a penny for every $100 foundations awarded,” Project Out Board member Elsabel Rincon noted regarding a statistic published by the Nonprofit Quarterly.

In contrast, Eastern Bank’s Charitable Foundation has provided more than “$1 million to LGBTQ causes” alone over the last decade, and millions more through the years, according to Stager, who is also Executive Vice President of Human Resources.

“Eastern has been a corporate leader in supporting equality initiatives through both financial assistance and our progressive corporate practices,” said Andrea Goodman, Vice President, Public Relations & Communications to The Rainbow Times. “This includes becoming the first company in the country to sign GLAAD’s amicus brief that asked the U.S. Supreme Court to strike down the Defense of Marriage Act (DOMA), adding gender identity to our employee nondiscrimination policy, expanding our health insurance to include coverage for gender-related care, including transition-related surgery and supporting services, becoming the first bank in the U.S. to appoint a transgender person to the Board, and using our business voice, philanthropy and advocacy to help successfully uphold transgender equality in Massachusetts during last November’s election and ‘Yes on 3’ ballot question. Supporting Project Out’s important work to help advance the LGBTQ community is another example of our commitment to support opportunity for all.”

A long-standing advocate for diversity, equity, and inclusion, Eastern Bank is a staple in the LGBTQ community.

“I am delighted that Eastern Bank has awarded these funds to help Project Out provide services to the trans and non-binary population,” Betsy McGinnity, Project Out board member added. “It’s really heartening to get support from such a great community partner.”

The bank has been providing assistance to organizations for “25 years now, and have donated over $85 million in close to 25,000 grants,” Stager said.

And, the bank’s commitment reaches far beyond funding.

“We will use our philanthropy, volunteerism, and advocacy to do what is right and smart to enhance inclusion across our region, to drive equitable economic mobility, and to work to encourage a welcoming environment for everyone; enabling each of us to make the kind of personal contribution we are meant to make and move our corner of the world to be better, fairer, more sustainable,” Stager affirmed.

Eastern Bank donates $6-8 million each year across its footprint from the white mountains of NH, through eastern and central MA to the tip of the Cape, and into RI.

“Eastern Bank’s contribution to Project Out will be life-changing and life-saving for countless individuals taking part in our programming from trans-specific services, to community education forums, to corporate and nonprofit training,” said Ocasio. “We thank them for their dedication to serving those most vulnerable among us and creating a brighter and more positive world for tomorrow.”

To learn more about Eastern Bank, visit www.easternbank.com. To find out more about Project Out, its services and training programs, or to get involved, visit www.projectout.org.

Valentine’s Day: Are You Ready For It?