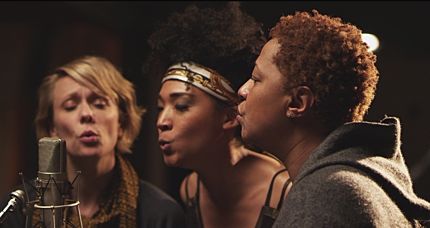 When Merry Clayton recalls the song most dear to her, “After All This Time” – one of many Carole King-written tunes on Clayton’s self-titled 1971 solo album – she starts to recite the words: “Oooh, I get a feeling every night when you come home that life is sweet, yeaaaah, baby.”

But then, she can’t help herself. Clayton breaks out the song full force, her voice swooping into a belt. It’s in this moment of impromptu vocal prowess you wonder why Clayton never found the solo success she so deserves.

That mystery is documented in 20 Feet from Stardom, a film that finally puts background singers – including the renowned Darlene Love – center stage. And life from there, well, it really is sweet.

Q. When you first saw the documentary, and all that footage they’d compiled, what was going through your mind?

Merry Clayton: That film … it took me to another place. Let me say it this way: It took my breath away. I could hardly breathe. I made it through the whole film until they showed myself and my late husband and my band doing “Southern Man,” and then I lost it. I mean, totally lost it. I was crying. It just got to my heart.

Darlene Love: I didn’t even know it was gonna touch me, but I was very emotional watching it. A lot of my friends who know me personally, and family who’ve seen it, actually cried during the movie. There were friends who didn’t even know I went through that (career) struggle, because I wasn’t the type of person to ask for help. They were really surprised that I had gone through that and had never said a thing about it.

Q. Darlene, when this project first came to you, what were your initial thoughts?

DL: I was the first person involved in it. (Producer) Gil Friesen went to Lou Alder, who is a very old friend of mine, and Dick Donner, who is the director of the Lethal Weapon movies, and he said, “I have this idea to do a story on background singers, but I don’t know where to start.” They told him, “Well, if you’re gonna do a story on background singers, you’re gonna have to get in touch with Darlene Love first.” And that’s what he did, because I’ve been doing background singing full time since 1958.

Q. Was this a trip down memory lane for you?

DL: It was. They filmed it off and on for two years, so the director (Morgan Neville) had to do some digging, because there is no information on background singers … unless you talk to background singers! What he did find, like The Blossoms (the vocal trio led by Love) singing with Tom Jones back in 1971, I was like, “Wow, how did they find that? We have never seen that.”

MC: It was really something. It took me back to the years out on the road with my husband and my band. I didn’t have to do anything; my job was to just do my craft, and he took care of the band. He had his career. He had done eight or nine albums. So he wanted me to have a great career – and he worked very closely with me to see that that happened. But they only wanted one queen, and it was Aretha at that time. And there was only one Diana Ross. That left me as the Merry Clayton who was basically almost unsung.

Q. It just wasn’t your time. But now is your time.

MC: I really believe that. And listen to me, I am soooo ready for it. I’m in good health. I’m in good spirits. I look fabulous, honey. And I got it going on.

Q. Did you ever think of yourself as an underdog?

MC: No, I don’t think I’m an underdog. I think I’m an after-dog. I think I’ve been totally recognized, if for nothing else but for the people I’ve performed with. You can’t be more recognized than being recognized for “Gimme Shelter” (Clayton sang on the 1969 track with The Rolling Stones). That’s been all over. By presidents, queens and kings, I’ve been recognized. The thing is, you get recognition, but not the recognition you think you should have.

Q. You gotta know that the gay community always puts our divas in the spotlight, right?

MC: That’s right, baby. And I mean, when you got the gay community under your feet, you really don’t have too much of anything to worry about.

Q. How would you describe your relationship with the gay community all these years?

DL: If it weren’t for them in my audience, I wouldn’t have one. They’ve always supported me over the years. Ninety percent of my audience is white – it’s not black – and gay. So, you know, thank god! They know more about the background singers than anybody. They saw how we looked, they saw how we dressed, they saw how we moved around. They were looking at that too. A lot of people have come up to me, even before the movie, saying, “I saw you when you sang with Dionne Warwick” or “I saw you when you were with Tom Jones” or “I saw you with Elvis,” so they watch that. They don’t just watch the lead singer; they watch the whole thing – the whole performance in front of them.

MC: They’ve always loved me. They always loved me and adored me and have allll-ways supported me! When I needed clothes, when I needed things to wear for shows, I’d call my queens, baby. They’d be like, “Don’t you worry; we got you covered.” The children, they’d be there to see me, protect me. I looooo-ve my gays, baby. (Laughs) I love the children and the children love me. But it’s always been that in my career. Always.

Q. A diva doesn’t go without her gays.

MC: Ever. Ever! From 5 years old. What I’m saying is, when you start singing, there’s always a wonderful gay friend in your family – not a part of your family, but always a friend your parents know or somebody knows – and they’re always very protective of you. They make sure you have what you need, they make sure you get to where you’re supposed to go on time and they make sure you’re cool. I mean, when I first started singing, please … there were wonderful gays who were like, “Oh, you need a gown for baby sister, for Merry? Let’s make her a couple of dresses, honey.” And I’d look good! We didn’t come with silver spoons in our mouth, so they would sit down and make me a dress, make sure my shoes matched my dress, that my hair was done and that I looked cute. So yes, I love my gays, baby.

MC: That’s my baby. I haven’t talked to my baby in a long time. I’m gonna have my co-manager find Tori because I haven’t heard from her in quite a while.

Tori was with me when I did the song for Dirty Dancing, “Yes.” Her ma and dad were in town and she called me and she said, “Well, what are you doing?” I said, “I’m going to the studio, girl; I got this thing for something they’re doing called ‘Dirty’ … something.” She says, “I want you to meet ma and dad.” So they came to the studio where I was and hung out while I did “Yes.” We had a wonderful time.

Q. Darlene, in the movie you talk about cleaning houses to make ends meet when singing wasn’t cutting it. Tell me about the worst house you had to clean.

DL: (Laughs) My own! To this day, I always say, “Lord, please let me make enough money for somebody to clean my house.” And so far, it’s been working out.

Q. After doing this film, do you feel like the star you always wanted to be?

MC: I feel that I am absolutely the diva that I’ve always wanted to be. Not necessarily the diva, but just the woman who has paid dues and had fun in the process and has had, basically, a wonderful life. I really feel blessed to have been a part of this. Honestly, it feels like I’m in a dream and I’m waiting for someone to pinch me and say, “Girrrl-friend, wake up. Come out of it, suga.” It really is just a phenomenal dream, and I hope to stay in it until I close my eyes for the last time.

DL: Between getting inducted into the Rock and Roll Hall of Fame and this, this kind of seals it because now, with this movie, my career will go on and on and on. This movie is doing for us what superstars’ records do for them. It has given us a voice. Now we have a voice.