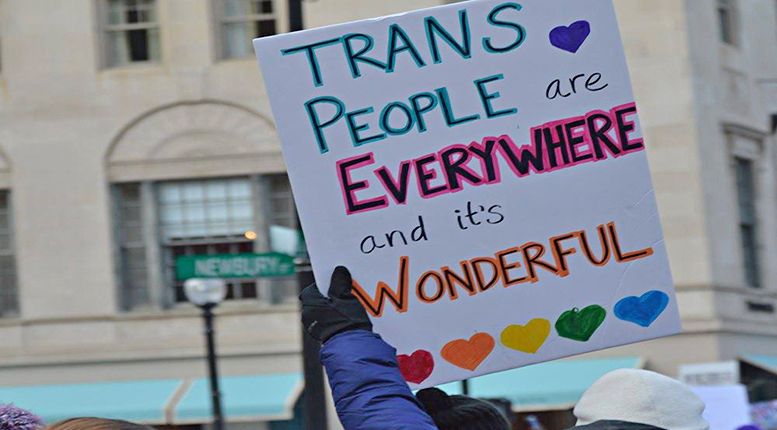 Kyler Prescott grew up in San Diego. He was an avid piano player, an animal lover and a talented writer. According to his mother, Katharine Prescott, he was, most of all, a deeply compassionate young man.

Kyler was also transgender and dealt with bullying in school, online harassment and constant misgendering. Like many transgender teens, he struggled with depression and suicide. When he was 13, he wrote a poem about the heartache of a boy forced into a gender he never identified with:

…I’ve been looking for him for years,
But I seem to grow farther away from him
With each passing day.
He’s trapped inside this body,
Wrapped in society’s chains
That keep him from escaping.

But one day I will break from those chains.
One day I will set him free.
And I’ll finally like in the mirror.
And see me—
The boy I was always meant to be.

Less than a year later, on May 18, 2015, Kyler locked himself inside his family’s bathroom and committed suicide. He was 14 years old. He was the third transgender teenager in San Diego to commit suicide in 2015.

Fast forward to February 27, 2017: 26-year-old Ciara McElveen was in New Orleans celebrating Mardi Gras with friends when she was ripped out of her car, stabbed multiple times, run over by the vehicle and left to die.

Two days earlier, 31-year-old Chyna Gibson was shot to death outside a shopping center in the same city. Both were Black and transgender. As of the writing of this article, seven transgender women, all women of color, have been murdered in 2017.

This is the social context for transgender people in the U.S. as the Trump administration’s rescinded guidelines put in place under Obama directing schools to allow transgender students to use bathrooms and locker rooms corresponding to their gender identity.

In his statement to the media, White House press secretary Sean Spicer had the audacity to claim, “The president has maintained for a long time that this is a states’ rights issue and not one for the federal government.”

Bull$hit. This is a direct attack on transgender people and an effort to scapegoat society’s most vulnerable and marginalized.

Also as a result of Trump’s executive order, the case of Gavin Grimm, a 17-year-old transgender boy who is suing for access to the boys’ bathroom at his school in Virginia, has been delayed. Grimm’s case had been scheduled to go before the Supreme Court later this month, but it will now be kicked back down to a lower court. It may take years for the Supreme Court to hear the case.

Trump’s order will make it more challenging for transgender students and their families to advocate for their legal rights, embolden right-wing students, parents, teachers and administrators, and create more hardship for transgender kids on a day-to-day basis in the classroom.

What Trump has done is illegal. All schools have an obligation to provide students with a safe environment to learn, foster positive emotional development and social relationships and develop to their fullest potential. This includes having the freedom to express your gender identity without fear of harassment or violence.

For transgender students who experience rejection from families, schools have the potential to be affirming and supportive institutions that can provide mental health services, educational resources and important medical needs. Unfortunately, for too many, they are the opposite.

In a 2011 study, 82 percent of transgender youth reported feeling unsafe at school, 44 percent experienced physical abuse, and 67 percent were bullied online by peers. In a social climate like this, Trump’s executive order will have deadly consequences.

“The reality is that kids will be harmed by this,” Chase Strangio, staff attorney for the ACLU’s LGBT and AIDS Project, explained in an interview with Democracy Now! “I can’t say it more strongly, but the blood is on the hands of these lawmakers, who are making it a priority to make vulnerable kids feel less safe.”

The right wing has tried to whip up a moral panic about transgender people using the bathroom to assault women and children to regain ideological ground lost since their decisive defeat in the battle for marriage equality. But contrary to bigoted hysteria, there have been zero reported incidents of transgender students physically attacking or sexually assaulting anyone in restrooms or locker rooms.

There are, however, horrifying stories of trans people being harassed, brutally assaulted and even killed for simply using the bathroom or even merely existing.

When class, race and gender identity are viewed simultaneously the statistics are horrifying: trans women of color make up 67 percent of LGBTQ homicides and have a life expectancy of 35 years. When it comes to safety, it’s clear whose lives are in danger: transgender people, particularly transgender women of color.

Claiming that Trump, a misogynist and admitted sexual predator, cares about the well-being of women and children is disgusting. It’s right-wing politicians who lay off teachers, restrict women’s access to abortion, cut funding for food stamps, close rape crisis centers, tear apart immigrant families and defend police brutality that are a threat to women and children, not transgender people.

Trump won support in the last election by tapping into widespread dissatisfaction with the status quo and promising to “Make America Great Again.” Instead, he’s offering massive tax cuts for the rich and corporations, lower wages and deeps cuts to domestic social program, including public education.

As it becomes obvious that the Trump administration won’t make good on its promises, it will double down on scapegoating and attacks against the most vulnerable to maintain support and redirect anger away from them and toward other workers—immigrants, Arabs and Muslims, African Americans and LGBTQ people.

Given the centrality of scapegoating to Trump’s economic nationalism and his brutal austerity agenda, winning this fight will take more than a talented team of lawyers in the courtroom or relying on half-hearted “allies” in the Democratic Party.

The inspiring wave of airport occupations across the country pressured federal judges to overturn Trump’s racist Muslim ban within days and demonstrated the collective social power that ordinary people have to resist and win.

Supporters of transgender equality will need to revive the same kind of mass militancy to reverse Trump’s attack and move toward winning the supportive schools that all students deserve and the funding and resources to make that possible.

That can begin with organizing for the National LGBT March in Washington, D.C., on June 11 to send a clear message that millions stand with transgender students and are ready to take this fight all the way.

*Keegan O’Brien is a queer socialist activist and writer from Boston who recently graduated from the University of Massachusetts Boston with a Master’s degree in Education. His writing has appeared in The Nation, Electronic Intifada, Jacobin Magazine, Socialist Worker, and the International Socialist Review. This article was originally posted on the Socialist Worker.