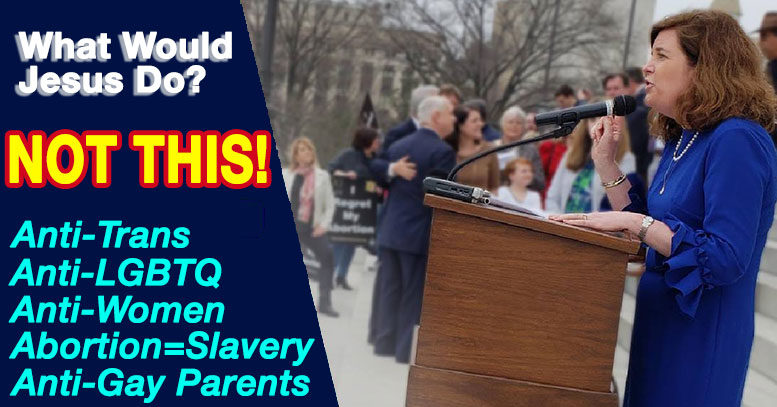 In 2011, McGinn submitted written public testimony in opposition to a proposed regulation change that would prohibit private adoption agencies from discriminating on the basis of sexual orientation, age, or family status in child placement. She called the proposal “absurd” and “irrational,” writing, “although redefining family, marriage, and parenthood has become a national obsession, one man and one woman joined in marriage remain the most successful paradigmatic family in which to place a child.”

In the same testimony, McGinn called LGBTQ+ adoption “a social experiment on our children.”

McGinn similarly displayed her opposition to LGBTQ+ parenthood when she liked a tweet calling HB1979 “harmful to children.” HB1979, known as Jacob’s Law, clarifies and streamlines parental rights for LGBTQ+ parents whose children are born through surrogacy. The bill was named after a child named Jacob, who was born through surrogacy to a gay couple in Northern Virginia, and it passed with bipartisan support in 2019, including unanimous support from House and Senate Democrats.

McGinn also signed a letter condemning Catholic politicians who support marriage equality, embryonic stem cell research and reproductive freedom. The letter explicitly compares marriage equality, stem cell research and abortion to slavery, stating, “The slave trade coarsened the British people, the British ruling class, and British public life. In precisely the same way, abortion and other issues have coarsened our public life, and have poisoned American political discourse and our politics.” She added, “If Catholic politicians advocated segregation or — even worse — slavery, would there be a call for civility towards them?”

The letter that McGinn signed also states, “The lack of public civility comes not from pro-lifers but from these Catholic politicians who support the right to kill innocent life in the womb and those who support defining man-woman marriage out of existence,” and criticizes these “morally repugnant practices that run counter to the common good and that should be unwelcome in a just or even polite society.”

This year, McGinn used transphobia to explain her public opposition to ratification of the Equal Rights Amendment, saying the ERA “does not even mention the word ‘woman’ or ‘women,’ referring only to equality of rights on account of ‘sex,’ a term which enjoyed a common understanding in 1972 – a man or a woman – but does not in 2019.”

Southerland continued, “What makes McGinn’s anti-LGBTQ+ remarks even more disturbing is that she said them publicly with the express intention of influencing policy. It seems she is determined to replace former HD-13 Delegate Bob Marshall as Virginia’s ‘chief homophobe.’ Just like Marshall, while McGinn enters the race with a history of regressive and discriminatory public policy positions, Delegate Roem will continue to focus on kitchen-table issues affecting western Prince William County and Manassas Park, like fixing Route 28, expanding health care coverage, ending school meal debt shaming and increasing government accountability.”