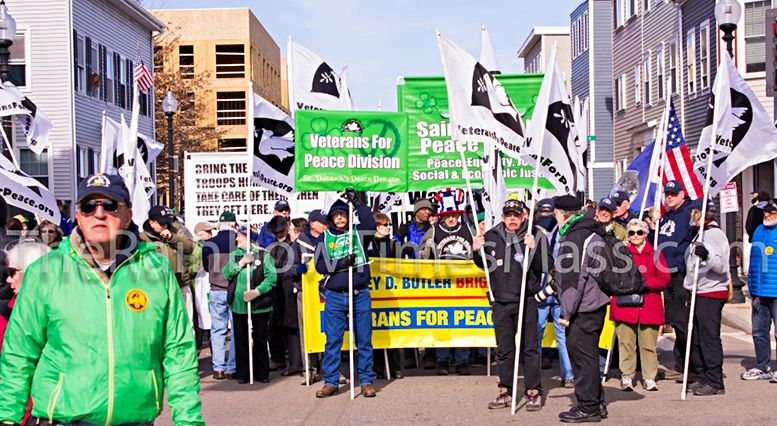 The Veterans for Peace are still being excluded, now with no Peace Parade to march in

BOSTON—There were two, now there is only one veterans organization denied to walk in the Allied War Veteran’s Council, AWVC, Saint Patrick’s Day Parade. Veterans For Peace is still prohibited from walking in the historic parade.

“We are thrilled that the OutVets have been allowed to walk in the parade again this year and that the Allied War Veterans Council reversed their earlier misguided decision” stated Pat Scanlon, Special Events Coordinator for Veterans For Peace. “It should be clear to all that there is still one veterans organization, veterans who now work for peace, that are still not allowed into the parade this year.”

“This is shameful,”said Scanlon. “This decision should be reversed by the AWVC and all those, especially politicians, city, state and national leaders, who say they support our veterans should not participate until all veterans are allowed to participate, whether or not they fly a rainbow flag or work for peace.”

Saint Patrick’s Day Parade is not inclusive until all Veterans are included.

Other stories pertaining the Veteran’s for Peace Struggle to be included in the AWVC’s Parade:

Many more stories and releases on the Veterans for Peace’s struggle to be included can be read here.