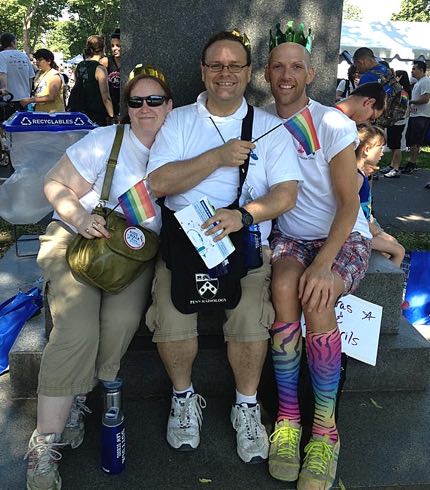 At 6.2 miles, the AIDS Walk Boston route is not very long compared to other fundraising walks. But for Kelly Rush, it represents a long journey to self-acceptance.

Since he first started walking in 2011, Rush and his team, now called Divas and Devils, have raised more than $21,000 for AIDS Action Committee, making them one of AIDS Walk Boston’s most prolific fundraising groups. It’s a long way from where he was 15 years ago—or even six years ago.

On July 11, 2001 Rush was taken by ambulance to Beth Israel Deaconess Hospital with a high fever and severe dehydration. He was treated and released that day, but a week later, his worst fear was confirmed: Rush had HIV. A child of the 1980s, Rush could not shake the idea of HIV as a death sentence and a highly stigmatized disease. He couldn’t bring himself to seek treatment. The ensuing 10 years, Rush wrote in a 2011 fundraising email, “included a lot of running from my condition, secrecy, depression, self-loathing and alcohol abuse.” He moved away from Boston and told very few people about his HIV status. [pullquote]Since he first started walking in 2011, Rush and his team, now called Divas and Devils, have raised more than $21,000 for AIDS Action Committee, making them one of AIDS Walk Boston’s most prolific fundraising groups. It’s a long way from where he was 15 years ago—or even six years ago.[/pullquote]

“I think part of it ties into my background,” Rush says of his downward spiral. “I’m from central Maine and was relatively uncomfortable with the gay community. And then I think I also, because of my age—I’m just about 40 now—we were brought up in an era where if you get HIV, you die.”

When Rush moved back to Boston in 2010, he was determined to live a healthier life. He began retroviral therapy, started counseling for depression and substance abuse, and was working out and eating better. Months later, when he learned a co-worker was participating in the 2011 run portion of the AIDS Walk & 5K Run, Rush followed her lead and signed up to participate in the Walk.

But the most important step of that Walk for Rush happened well before he laced up his sneakers on the morning June 5, 2011. Rather, it was when he sent a fundraising email to a wide circle of friends from college and told them he was HIV positive. His goal was to raise $700, but he quickly raised $3,500. It was an eye-opening experience.

“The reaction was much different than I expected,” Rush recalls. “I think that’s the thing about the closet, right? When you have a closet, any closet, it’s about building up psychological fear on expectations that come from nowhere. That fear often has no basis in reality in terms of the people in your own immediate circle. More often than not, it comes from what you’ve heard happen to other people far removed from your everyday life. It makes no sense.”

Despite the outpouring of support, Rush, to some degree was still isolated. He completed his first AIDS Walk alone, breaking out of the pack doing 11-minute miles and crossing the finish line so soon that no one took notice.

But that initial “coming out” changed the equation. In subsequent years, friends from college and beyond joined Rush’s AIDS Walk team, forming a community of mutual support. He recalls the year his friend Amy participated just a few months after having knee surgery. “It was really, really slow,” says Rush, laughing. But they started and finished the Walk together.

On the eve of last year’s fundraising for the AIDS Walk, Rush finally took what might be the most important step of his journey: he disclosed to his family—including his Baptist parents—that the reason he walks is because he is HIV positive. Again, he was surprised by their supportive reactions. “In fact, my mother’s first question was, ‘Does this mean you’re not going to be able to get married?’” he says with a laugh.  “I mean, ultimately, I was more consumed with thinking about my diagnosis being a death sentence than my family was!”

Last year’s team was very much family and it included an uncle, a niece, and cousin. His parents greeted them at the finish line.

For Rush, the Walk is a reminder that there is life beyond HIV, regardless of what society thinks.

“I feel like the perception in society is that if you’re HIV positive you’re somehow less than someone who is not HIV positive,” Rush says. “My friend Chris tells me that I have to stop getting up in arms when people call me brave or inspirational because it takes strength to live life openly and honestly. The question is if I’m an “inspiration” because I choose to live my life openly, without shame and to combat the stigma of being HIV positive, what does that say of us as a community or a society?

Why is it brave to live openly and honestly?”

Registration is now open for the 30th annual AIDS Walk Boston & 5K Run, which will take place Sunday, June 7, 2015. The Walk is 6.2-miles. The 5K Run is a competitive, timed event fully sanctioned by the USA Track & Field Association. The AIDS Walk & 5K Run will begin and end at the Boston Common. Participants can register for the AIDS Walk & 5K Run at www.aidswalkboston.org. There is neither a registration fee nor a minimum fundraising requirement to participate in the Walk. There is a $30 registration fee for the 5K Run.