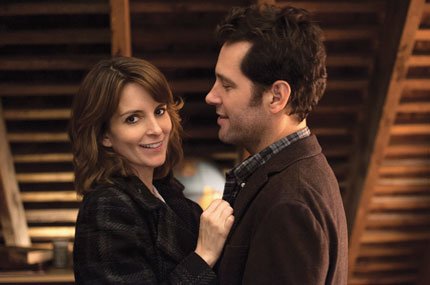 By: Chris Azzopardi*/Special to TRT–

They say dreams come true, and that one where Tina Fey and Paul Rudd act (and shower) together on the big screen – it’s really happening. Two of the most charismatic, gay-loved actors team up for Admission, about a college admissions officer (Fey) and her could-be biological son who she meets through an old classmate (Rudd).

“It’s a movie about chasing acceptance. That formal outward acceptance shouldn’t be valued as much. That’s the message: Just be who you are,” says Fey, a GLAAD winner for 30 Rock who recounted her gay musical-theater origins in her Bossypants memoir.

Rudd’s career started, and still is, just as queer: besides Clueless, he starred as Jennifer Aniston’s best gay pal in The Object of My Affection. And that’s just the beginning of his homo happenings.

“Yes, it’s true. It’s really true,” he says, reflecting on the increasingly gay apex of his career at the Waldorf Astoria in New York City, seated next to Fey.

What does he have to say about that important message of self-love and acceptance, then? Surely something gay, right? In goofy Rudd-style, just what you’d expect: “Lily Tomlin’s in it!” he quips with his sly smirk, referring to the comedian’s role as Fey’s mother. “There’s your answer.”

Q. What did you see as the biggest challenge of taking on these characters?

Tina: For me, it was just trying to do a good job of what I felt was the dramatic arc of the movie. There were certainly scenes that were more emotional than anything I have ever had to do before.

Paul: Just doing it – that was the challenge. (Laughs) That you buy me in the part and it works in the context of the story, and that the conflict seems legit and the character is not one-dimensional – all those things that I think kind of existed in the script. The challenge is just bringing the material to life. Oh god, did I just say that?

Q. Can you relate to the admissions process?

Tina: I wasn’t growing up in some kind of private-school world where it was expected of you to try to get into an Ivy League school or something. I think there are people who grow up in a family where it’s like, “If you don’t get into Harvard or Yale or Princeton, you’re done!” I think that’s craziness.

Paul: I never grew up with that at all. I didn’t apply to any of those schools – mainly because I know I wouldn’t have gotten in. I was just out to lunch when it came to all that stuff. Living in New York City, I’m certainly much more aware of it now. I’m much more aware of it having friends that went to those schools and even having young kids and seeing how they’re being groomed for these schools.

Q. What was it like to come from Kansas City and head to New York to become an actor?

Paul: Well, I wasn’t born in Kansas City; I was born here. I lived in Kansas and then California and then went back to Kansas. Nobody in my family did this, but it felt normal to me because I was pursuing what I wanted to do. I had as much false confidence as I possibly could muster, because my parents told me as a young kid that I could be anything I wanted to be – and I actually believed them.

Q. Were you doing the waiting tables thing, then?

Paul: I was working in the kitchen at a Bennigan’s. I didn’t even get to wait tables. I was in the back expediting and making salads.

Q. You also DJed. What records were you playing that got the girls and boys on the floor?

Paul: MC Hammer’s “U Can’t Touch This” was pretty popular, and Right Said Fred’s “I’m Too Sexy” was a huge crowd pleaser. There were those two, and then there were classics like “Mony Mony” and “What I Like About You” by The Romantics. I’ve been out of the bar mitzvah DJing game so I don’t know if those are still popular, but they were big hits when I was spinning.

Q. Do you regret not having those experiences, Tina?

Tina: I made cheesesteaks at a swim club snack bar so that my mom could have free access to the pool. (Laughs) My brother did it for a year, and then she transitioned me into doing it so she could continue to have employee access.

Q. As an actress, and even more so as a writer, what do you think the secret is to great comedy?

Tina: Oh gosh. Obviously try to surround yourself with people who are really funny and good at it. Like Paul.

Tina: Yes! And trust your own instinct.

Q. Was it hard to shoot the shower scene?

Tina: There are so many built-in humiliations in a thing like that. We shot that shower scene very late in the evening.

Paul: And it was cold.

Tina: Just out of frame, I’m wearing a rolled-down bikini top they gave me; they’re like, “We have a skin-colored one just in case.” Then jams and Crocs. So it’s already ridiculous. We don’t need to add to it.

Paul: I didn’t have the rolled-down bikini top, but I did have the jams – and I think I might’ve had the Crocs, too.

Q. Tina, do you see this as act three in your life now that 30 Rock is done?

Tina: I see it as a series of increasingly larger grifts that I’m running. _30 Rock_ was more of a shell game; this is more of a Ponzi scheme. This happened while _30 Rock_ was on a summer hiatus, and it felt like a really lucky thing to be offered to do – a part that always made sense. I’m always pleased when I see a part where people speak intelligently and speak like adults and also, I go, “College admissions lady – do I look like that?” Yeah, I look like that more than, perhaps, Denise Richards would.

Q. Yet you got called “cougar” in the movie.

Tina: It’s in my contract.

Q. Did you talk to anyone in admissions?

Tina: I did. Jean (Hanff Korelitz), who wrote the book, worked in admissions and I met her many times, and I did talk to one or two other people who worked in admissions. One thing that was interesting: Someone who wasn’t connected to the movie, who was an admissions person, said, “People think we really want to say ‘no’ to everyone when really what we want is to be saying ‘yes.’” Their happiest moments and their goal was to be able to say “yes” to as many kids who they think will thrive.

Q. What makes a comedy a classic?

Paul: It has to be really funny, and funny over a long period of time. If it was funny 10 years ago, it has to have been funny 20 years ago.

Tina: I saw Trading Places on TV recently, and Eddie Murphy in the first five minutes of that movie, where he’s pretending to be homeless – so funny! That holds up.

Q. Clueless is still popular with the teens.

Paul: Well, I have no perspective on that one! (Laughs)

What would you tell a kid who’s going through the admissions process?

Tina: Do your best, but also know that the results don’t define your value as a person or your future as a student or an adult in the world. It does not define what you’re gonna be. It’s interesting because I think there are so many kids who do all the right things to get on the right track now, and there are just too many of them on the right tack. As the schools make a genuine attempt at diversity, I think some kids are taking the old-school path and getting bumped out. Hopefully that shuffling will make them more interesting people on a more interesting path.

Q. As a woman who’s able to get movies made in Hollywood versus the indie world, are you getting the offers you want?

Tina: Sure, yes. Because I don’t expect to be the person who’s like, “Let me see my offers today.” A part like this, I feel so lucky to have been offered. There are a lot of real movie stars in the world, and I’m always thrilled any time the phone rings. Ahem … no one from Anchorman 2 has called, so if you could pass that on.

Q. How do you juggle everything, Tina? Doing this movie, writing scripts, taking care of children …

Tina: Well, I mean, I try to take care of my children, yeah. (Laughs) But I have help with that. I wasn’t writing anything at the same time (as doing Admission) because I wanted to make sure I was focused. But you just take as much help as you can get and go to sleep whenever anyone’s not looking.