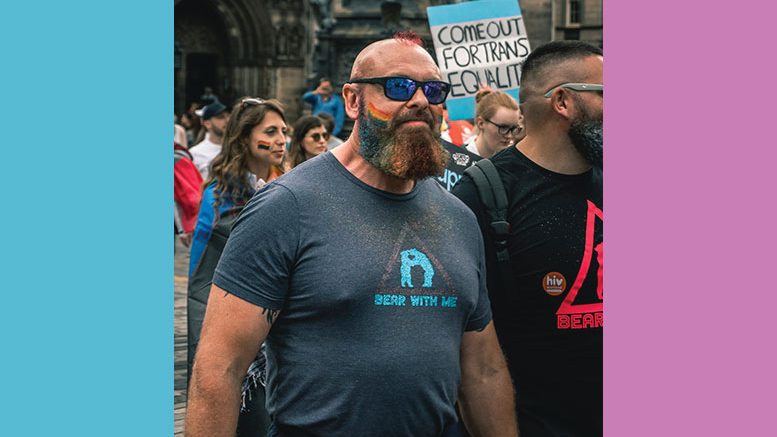 The event focused on community members, especially Black and Trans people, who are typically marginalized or tokenized at white-led Pride events, according to the release. Rather than a parade filled with corporate floats advertising themselves and passive onlookers along the sidelines, it was a “participatory march of the community itself.”

It was a protest, not a party. The march unapologetically highlighted issues of racism, police violence, and the obscene amount of money spent on militarized police, and a military which polices the world. In so doing, participants will be honoring the rich, but largely forgotten history of the Stonewall Rebellion and the movement that followed it.

Not only was Stonewall a rebellion against police violence, but fighting racism was also a core principle of the movement that came immediately after it. The early LGBTQ movement organized many actions against racism and police violence and in solidarity with the Black Panther Party, leading the BPP to become the first large “non-LGBTQ” organization to embrace what at the time was called “gay liberation.”

Like today’s #blacklivesmatter movement with its demand to defund the police, the early, post-Stonewall LGBTQ movement recognized that resources spent on repression deprived communities of needed resources. As such and in solidarity with peoples abroad, the movement organized into chapters known as the “Gay Liberation Front,” named after the National Liberation Front in Vietnam. GLF proudly organized in the anti-war movement of that era.

The movement was “intersectional” before that term had been invented. So, for example, Lesbian and Bisexual women helped radicalize the women’s movement of its time, challenging its entrenched homophobia and respectability politics. In so doing they helped contribute to the legalization of abortion in 1973.

Similar to the demands presented to Boston Pride in 2015 and other Pride organizations in the past few years, the demands of the marchers included:

— Our goal is to reclaim Pride from white profiteers and huge corporations and return it to the people, especially our black community.

— We want to refocus and remember that Pride began with Black, Brown and Trans lives. We want bars and events to not only include, but showcase and feature the black, brown, trans, femme, lesbian, non-binary, ballroom and all other underrepresented communities on all promotions and advertisements for without these communities we would not have any of the achievements we have today.

— We want to defund the police, fund our communities, and redistribute wealth.

— We want community control of the police, with an elected civilian police accountability council that can promptly fire brutal cops and the police superintendent. CPAC now!

— The Stonewall Movement was against state violence, whether at home or abroad, opposing police terror against the Black Panther Party and the US war against Vietnam. Today that also means abolishing ICE, stopping deportations, and stopping the scapegoat of immigrants and refugees

Cohosts of the march included:

Reclaim Pride March, Pride Without Prejudice, Affinity Community Services, Brave Space Alliance, Chicago Alliance Against Racist and Political Repression, Gay Liberation Network, National Trans March, and Organized Communities Against Deportations, along with the support from many other individuals and organizations.

Speakers at the march included:

Maori Beverly Hillz Missy Banks, who tells us “I’m the second born of the house of Beverly Hillz I’m an upcoming queen of 2 years now. I’m a trans woman of color who goes by she/her pronouns and I have been on many stages in this community that I have loved and loathed. I have been openly trans for almost 10 years and I think I’m beautiful just the way I am in my body the way it is.”

Zahara Basset is an American businesswoman. Zahara, pronouns are She/Her/Hers. Zahara is the Director of Development and Enteral Relations at Brave space alliance; She has served as a Research Assistant at Howard Brown Health. Zahara is the CEO/President of Life is work a Non-Profit and OnlyMattel Inc. She is a graduate of Illinois Media School in Broadcast Communication. For years Zahara has supported and provided comprehensive resources to the TGNC communities of color on the West and Southside of Chicago. Zahara started her initiative with Life is Work by developing “Meals for Christmas, feeding those who were homeless on Christmas day. Zahara has served on many grassroots Boards of Directors and planning committees locally and nationally.

Russia Brown is a black transman that has advocated for the LGBT community. He used his voice to create change and encouraged CTA to change their medical policy and cover gender-affirming surgeries. He is also the creator of becomingME apparel, a clothing line custom created and tailored to the LGBT community and allies to inspire pride, self-love, and solidarity. He is also a humanitarian that organizes clothes drives, supplies hygienic products, care packages and food to the homeless community.

Wemi Esho from National Trans Visibility March tells us “I am not free while any other Black person is unfree.” Coming from a country where acceptance is a bizarre and even criminalized concept, Wemi as a Queer Black Female Immigrant, has been giving a voice to the marginalized in her community by means of opinion editorials, academic research, and social media. She is rooting for everybody Black and is dedicated to using her skills for the celebration, liberation, and advancement of the LGBTQIA+ community.

Antonio Gutierrez (they/them) oversees Strategic Development & Operations for Organized Communities Against Deportations. OCAD is a group of undocumented, unapologetic, and unafraid organizers building a resistance movement against deportations and the criminalization of immigrants and people of color in Chicago and surrounding areas. OCAD envisions a future without displacement and borders, without incarceration, and without deportations. A future where people can choose to stay or migrate freely. A future where our bodies will not be commodified or exploited to fulfill quotas, to fill cages, or be used to generate profit.  OCAD works for a future where the people determine the use of resources to ensure our collective well-being. A future of liberation for indigenous people, immigrants, people of color, women, LGBTQ, black, and all oppressed individuals. A world of dignity and resistance, and a world ruled by systematic transformation, laughter, and love. Gutierrez became involved with the OCAD as part of the Immigrant Youth Justice League (IYJL). They have over 5 years of non-profit administration development and is also a co-founder of the Albany Park Defense Network and the Autonomous Tenants Union.

Strawberry Hampton is a trans woman who was incarcerated within the Illinois Department of Corrections (IDOC). In December 2018, after a year-long legal battle against IDOC about the abuses she endured from inmates and correctional officers, she was transferred to a women’s facility. Her case is the second in the country in which a federal court recognized that a prison’s decision to mis-assign transgender people is a form of unlawful discrimination. She is an outspoken advocate against the human rights abuses trans women endure in the criminal justice system.

Tatyana Moaton is the CEO, and Principal Consultant for Envision Consulting, one of the first black trans led consulting firms in the country. She has extensive experience working in Human Resources championing strategic initiatives geared towards Diversity & Inclusion recently for Howard Brown Health, the Midwest’s leading provider of healthcare to LGBTQ+ community. She is currently in the role of a Senior Capacity Building Specialist with San Francisco Community Health Center. Tatyana is a veteran of the U.S. Armed Forces, serving honorably as an Intelligence Analyst in the US Army. She was reared in the City of Chicago and attended college in Milwaukee, WI. She obtained both her Bachelor of Science in Developmental Psychology and her Masters of Business Administration with a concentration in Human Resources Management from the University of Wisconsin-Milwaukee. She is a staunch advocate for the Trans community and has worked with the American Civil Liberties Union as a spokesperson for Trans litigation and LAMBDA Legal. Working with the U.S. Center for Disease Controls, National Center for HIV/AIDS, Viral Hepatitis, Sexually Transmitted Diseases, and TB Prevention; Division of HIV/AIDS Prevention; Capacity Building Branch; Science Application Team as a consultant to develop the first intervention geared towards the transgender targeted population. Tatyana is a faculty member of Transgender Strategy Center and has worked with organizations and companies such as AIDS United, NMAC, Gilead, Merck, Elton John AIDS Foundation, and The Black AIDS Institute.

Samer Owaida is a grassroots organizer born in Palestine and raised in Chicago. He graduated in 2018 from Saint Xavier University with the award of Top Sociology Student. He used the grant money that came with the award to study in Palestine the following summer and produced qualitative and quantitative reports on several issues taking place in the West Bank. Samer has worked closely with the Arab community as a case manager through the Department of Human Services and now resides in Roger’s Park as a member of grassroots organizations. Today, Samer works as the Community Client Housing Navigator at Chicago house, working to help individuals with chronic homelessness and a HIV+ status to find housing. Samer is also a Research Assistant at the University of Illinois at UIC conducting research on the topic of HIV and immigration among gay or bisexual Arab men.

Jae Rice is a trans-masculine public figure fighting for the liberation of oppressed communities on a daily basis. Jae is a DJ, cultural curator, Communications and Social Media Coordinator for Brave Space Alliance, composer, and overall practitioner of freedom and intentional justice. Their background in political science and intercultural communication combines with their dedication to the advancement of all Black LGBTQIA+ folks to perpetuate real-time, and on the ground societal shifts, advancements, and growth. Jae has spent several years creating safe spaces in Chicago that center all Black LGBTQIA+ Womxn, Femmes, and AFABS, and is now also devoted to creating and maintaining brave spaces as well.

Jayda Van (She/Her) works with the Chicago Alliance Against Racialism and Political Repression where they work to defend the rights of all oppressed people through their work of freeing victims of police torture and their movement to implement community control of the police with an all elected civilian police accountability council (CPAC). She will share her perspective as an activist and queer black trans woman on why community control of the police is critical for our community.