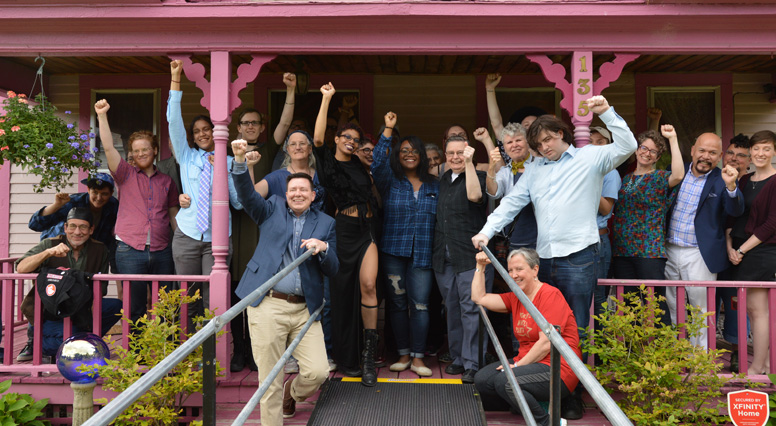 HOLYOKE, Mass.—More than 100 people attended the grand opening of the Sexual Minorities Archives (SMA) at its new home in a refurbished pink Victorian in Holyoke, Mass., and the inauguration of the Leslie Feinberg Library.

The SMA, a 43-year-old grassroots community repository of LGBTQIA literature, history, and art, was previously located for 32 years in Northampton, Mass., at the rented home of SMA curator Ben Power. Power was forced to relocate the archive to Holyoke after being displaced from his Northampton home when the landlord allegedly decided to sell it at a price he couldn’t afford.

The Sexual Minorities Archives are now located in Power’s new home—dubbed the Pink Lady—in a residential neighborhood in Holyoke, which he was able to purchase with the help of the Neighborhood Assistance Corporation of America, a non-profit community advocacy organization helping low-income people purchase homes. Power has established a nonprofit to maintain the SMA in perpetuity and hopes that supporters will come forward to keep it going after he is gone.

“This is a victory and a celebration not just for me, but for the whole community,” said Power, SMA’s transgender founder. “We almost lost this archive due to ‘trans’ discrimination and gentrification and greed that has made property values here so out of sight, it is unimaginable … it is a stone cold miracle that this house is here.”

Power, 67, who lives on Social Security disability income due to a rare disease called Granulomatosis with Polyangiitis, said he was nearly on the verge of suicide after losing his and the archives’ longtime Northampton home, but regained a sense of purpose when Leslie Feinberg’s widow, the renowned poet, activist, and essayist, Minnie-Bruce Pratt, drove a truckload of more than 1,000 books and other materials to donate to the SMA.

Feinberg, a trans activist and author of “Stone Butch Blues,” “Transgender Warriors,” and other seminal LGBTQIA works, agreed to donate her entire personal research collection to the SMA a few months before she died in November 2014 from complications related to chronic Lyme Disease. Power said Feinberg was committed to making her collected works—what she called a “powerful body of intersectional knowledge”—accessible to future generations of researchers in gender and queer studies, as well as to the overall LGBTQIA community.

At the event, Pratt, whom Power called “a national treasure,” read a selection of poems she had written during Feinberg’s long illness and praised Power’s perseverance in relocating the SMA.

“I’m very honored and moved to be here today to honor the tenacity and vision and courage of Ben Power,” she said. “To me, this space represents the ongoing struggle to take the reality that is in our hearts and minds and make it real . . . a place of respect and caring for one another, a place with no economic injury . . . where people can be however they want to be in their genderness. We know more than ever how badly we need each other right now.

“ … there is so much hope for me” that Feinberg’s books reside in the SMA. Leslie had revolutionary hope, and by that I do not mean an uninformed fantasy hope, but a hope directed at looking at who was in struggle and what can I do to help.”

Pratt said Feinberg’s last words to her were “Remember me as a revolutionary Communist,” and noted that she wanted people to let go of the old Cold War stereotype of what that means. Instead, she said, Feinberg hoped that people would think about “what it means to engage the world, to know what it means to suffer . . . In this room, I think about the LGBTQIA community and gender nonconforming people, but also how it overlaps with all struggles.”

Openly-gay Holyoke Mayor Alex Morse said he was pleasantly surprised to see so many people at the event. He issued a proclamation declaring June 3 as “Sexual Minorities Archives Day” in Holyoke.

“What an amazing treasure and resource we now have in the city of Holyoke,” he said. Morse noted the unfortunate circumstances that drove Power and the SMA out of Northampton, but said Northampton’s loss is Holyoke’s gain. “The positive is that we are now right here in Holyoke, in a city that is in some ways more inclusive than a lot of other cities we think of as being inclusive. You are welcome here in this city . . . we have always been the progressive city that could.”

Morse said appreciation of diversity is an “essential feature” of a progressive society, but that LGBTQIA history, literature, art, and research is, even today, not always easily accessible. Relocating the SMA—one of the largest LGBTQIA archives and educational research centers in the U.S.—to the city of Holyoke will go a long way towards improving access, he said.

Morse joined Power, Pratt, a delegation from the Workers World Party in Boston, and members of the LGBTQIA community in a ribbon-cutting ceremony to open the new trans-dedicated Sylvia Rivera Room at the SMA, where the Leslie Feinberg Library is housed. The room is named after Rivera, a trans rights pioneer who was a veteran of the 1969 Stonewall Uprising.

The Sexual Minorities Archives houses more than 12,000 books, periodicals, subject files, films, videos, audio recordings, multimedia, and art related to the LGBTQIA community in the United States and abroad. The SMA offers internships to college students in queer and gender studies and other disciplines, operates a free lending library, and distributes books, films and other LGBTQIA material through a “books on wheels” program to those who are housebound or in nursing homes. Students and volunteers at the SMA learn queer archival methods. The archives are open to the public, as well as to academic researchers from nearby and afar.

Visibility Of Marching in the 2019 Springfield Mass. Puerto Rican Parade