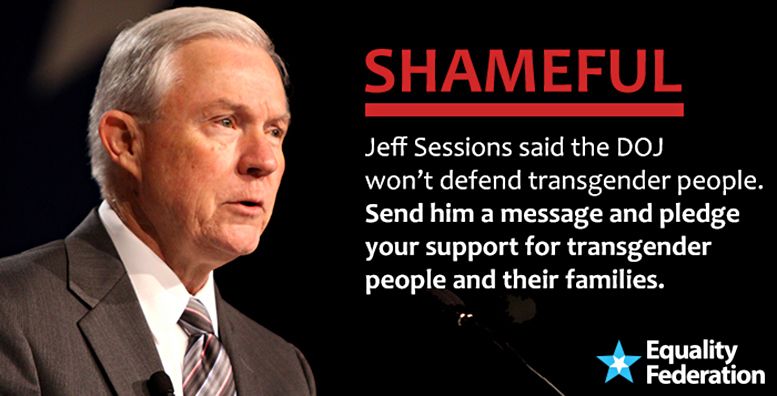 Latest Discriminatory Actions, Taking Place Within Hours of One Another, Double Down on Efforts to Degrade LGBT Community

WASHINGTON—The Trump administration today landed two punches against transgender Americans, first asking the courts to dismiss a legal challenge to President Trump’s ban on military service by transgender people, and then separately rolling back important employment discrimination protections for transgender workers across the country. Taken together, the two actions reinforce an agenda focused on promoting discrimination against some of the nation’s most vulnerable communities, and underscore the importance of the judiciary now more than ever – as one of the only backstops to an administration committed to dismantling rights and protections for LGBT people.

The National Center for Lesbian Rights (NCLR) and GLBTQ Legal Advocates & Defenders (GLAD) spoke out against the Department of Justice’s first punch against transgender Americans, following DOJ’s late-night response yesterday in Doe v. Trump, the first of four cases filed to stop President Trump’s transgender military ban, on which NCLR and GLAD are co-counsel. In the government’s motions to dismiss the case and oppose the plaintiffs’ request for emergency relief, the Trump administration falsely claimed transgender individuals have not yet suffered harm from this policy. GLAD and NCLR, who are set to respond to the government’s motions in court later this month, reiterated the compelling need to put an immediate halt to the ban: transgender Americans seeking to enlist are not able to do so, and currently-serving transgender servicemembers have been demeaned and stigmatized, denied health care, and are facing the loss of their professions, livelihoods, health care, and the post-military retirement they have worked hard to earn.

“The government’s response reads like pure fiction,” said Jennifer Levi, Director of GLAD’s Transgender Rights Project .”It states a fantasy that the President’s announcement of a ban on military service for transgender people has changed nothing.  That’s simply not true.  Every day this reckless ban stays in place, our military strength is diminished and our country is less safe for it.  We are optimistic the Court will see through this smokescreen and halt the ban.”

“The President’s attack on transgender service members who have dedicated their lives to serving our country is unconscionable. Rather than even attempting to defend it, the DOJ is asking the court to turn a blind eye to the devastation the President has caused in the lives of real people and real families,” said Shannon Minter, NCLR’s Legal Director. “Because of the President’s ban, smart, dedicated, and idealistic young people like our plaintiffs Regan Kibby and Dylan Kohere are barred from fulfilling their dreams of military service.  And transgender people who are already serving have been told that their skills, training, and years of dedicated service are not valued. The ban has left them scrambling to make new plans for their futures, just as it has undermined our nation’s security. This is the exact opposite of how military policy should be made.”

Just hours following DOJ’s response (which was filed at nearly midnight with the courts), news reports surfaced revealing DOJ’s reversing of policy that protects transgender workers from discrimination under Title VII of the 1964 Civil Rights Act, as outlined in a memo circulated internally at the Department yesterday.

“The administration’s focus on attacking and degrading transgender people is reaching a fever pitch,” said Levi. “Today’s developments illuminate just how far-reaching and relentless this unprecedented effort to roll back basic protections for LGBT people will be.”

Minter added, “Every day, it becomes more clear that the courts are one of the few checks on this accelerating agenda of blatant discrimination, which is why as Trump doubles down on his attack of LGBT people, we are doubling down on our legal strategy.”

NCLR and GLAD have been at the center of the legal fight challenging Trump’s military ban since filing Doe v. Trump on August 9 on behalf of five transgender servicemembers. In the weeks since, NCLR and GLAD filed an August 31 motion in Doe asking the court to immediately block the president’s policy and added two named plaintiffs who have had their plans for a career in military service thwarted by the ban – Regan Kibby, a Midshipman at the U.S. Naval Academy and Dylan Kohere, a first-year student at University of New Haven in West Haven, Connecticut and member of the Army Reserve Officers’ Training Corps (ROTC) program. The two organizations are also co-counsel in a second suit challenging the ban, Stockman v. Trump, brought by Equality California.

Former and current military leaders strongly oppose the ban. Just last week, the Chairman of the Joint Chiefs of Staff, General Joseph Dunford, Jr. said that anyone who meets the high standards of the military should be able to serve. Six former military leaders have lent their voices in Doe v. Trump and other legal cases against the ban, including former Secretary of the Army Eric Fanning, the only person to hold senior leadership roles in each of the three military departments and who led the Army during the year-long review of the military’s policy toward transgender servicemembers, and retired Admiral and former Chairman of the Joint Chiefs of Staff Michael Mullen. Some of the nation’s most senior military leaders have expressed their strong concern about the negative effects of Trump’s ban on military readiness, national security, and morale.

The government’s perpetuation of the false narrative that no one is being harmed by this ban underscores the need for the court to intervene and provide emergency relief now. Tell Sessions to stop discrimination against transgender people.