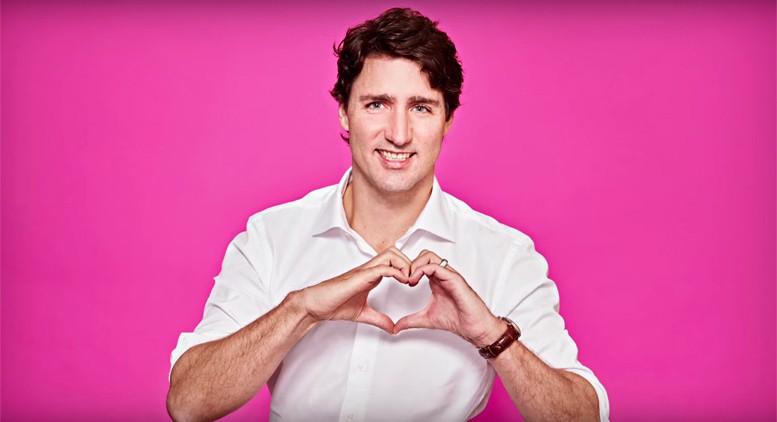 Prime Minister Justin Trudeau poses for the Unveiling of Pride Toronto's Theme, "You Can Sit With Us".

Pride Toronto Unveils 2016 Theme, “You Can Sit With Us”

TORONTO, ON—Pride Toronto recently unveiled its 2016 Pride Month theme, announcing to the world that this June, “You Can Sit With Us.” The campaign for Canada’s first-ever Pride Month, kicking off in 100 days, features Canada’s top political leaders: Prime Minister Justin Trudeau, Ontario Premier Kathleen Wynne and partner Jane Rounthewaite and Toronto Mayor John Tory who will all participate in this year’s festivities.

This year’s Parade will make Canadian history, with Justin Trudeau participating as the first ever sitting Prime Minister to march. To celebrate the power and beauty of its diverse community, Pride Toronto held an open photo shoot for community members, artists and city leaders to show their Pride. The event was met with an overwhelming response, enabling the campaign to showcase over 300 community members of all ages, sexual orientations, gender identities, gender expressions and ethnicities.

“If a picture is worth 1,000 words, maybe 1,000 pictures has the potential to give a true face to our community. And what a truly diverse and beautiful community we have,’” said Mathieu Chantelois, Pride Toronto Executive Director. “By striking a pose for our camera crew, hundreds took a stand for Pride Toronto, they are telling the world that it’s ok to sit with us, but also to rally, march, celebrate, love and change the world with us.”

Noted personalities in the campaign include:

This year’s theme is a play on, and response to, the infamous line from the 2004 cult-classic film Mean Girls. ‘You Can Sit With Us’ conveys a strong message of belonging and inclusion—a sentiment that was heard in consultations with community members. Canada’s first-ever Pride Month will launch on June 1, featuring extended programming and provocative events throughout the city, culminating in the much-anticipated Pride Parade on July 3.

Pride Toronto is a not-for-profit organization with a mission to bring people together to celebrate the history, courage and diversity of our community. Uniting and empowering people with diverse sexual orientations, gender identities and gender expressions, the annual Pride Toronto festival has become a major Canadian arts and cultural event and the largest Pride celebration in North America. Pride showcases Toronto on the world stage with diversity, inclusion and vibrant creativity. June 2016 features Toronto’s first-ever Pride Month, culminating with the 36th annual Pride Parade on Sunday, July 3. For news and programming announcements, visit www.PrideToronto.com and follow @PrideToronto on Twitter, Pride Toronto on Facebook and @pridetoronto on Instagram. #PrideTO