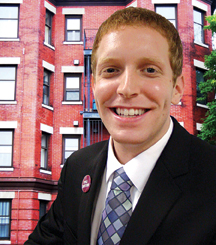 HOLYOKE, Mass.–Alex Morse, the nation’s youngest openly gay mayor, has gained local, state, and national attention for his recent campaign victory against former incumbent, Elaine Pluta. The 22-year-old Brown University graduate has plunged into Holyoke politics without following what many would consider as the typical protocol –working your way up the political ladder to the Mayor’s position. This perhaps was his greatest asset. He defied the odds, stayed optimistic and out strategized his opponent to land him the seat in Holyoke’s highest office.

Morse, attentive, articulate, decisive and knowledgeable of his hometown needs, voiced throughout the interview his resolve to become the Mayor of Holyoke—a certitude that was passionate and invigorated by his family, friends, and believers. During the interview, reflections and video clips of his victory speech were historical and moving. The wise young man and Holyoke elect candidate then, turned Holyoke around and Holyoke believed, hoped and dreamt of a better tomorrow—a tomorrow filled with diversity, inclusion and the belief that dreams do come true. Such inclusion was witnessed locally and nationwide and his victory speech depicted the people that supported him—young, old, White, Hispanic, African American, LGBT community members, students, recent immigrants, and more.

Recently, The Rainbow Times sat down with Morse at his campaign headquarters to discuss his campaign strategies, upcoming months in the Mayor’s office, plans to rebuild and revitalize downtown Holyoke, and his commitment to bringing the LGBT community to the paper city, soon to turn digital.

TRT: When was the first time you thought about running for the Mayor of Holyoke?

Alex Morse: I first joined the youth commission when I was 13 so I always knew I wanted to be involved in service and government. It was around my senior year of high school, perhaps even earlier, where I knew I wanted to eventually be mayor of Holyoke. When I actually got to Brown [University], I knew my time would be 2011. It didn’t matter that I would only be 21 when I announced and that I would be 22 if I won. I didn’t want to be a city councilor, I didn’t want to be on the school committee, I wanted to be in the driver seat and be the leader of my community.

TRT: Why 2011? What was that pivotal moment when you knew that would be the year?

AM: Because I graduated college in May and I didn’t have time to wait (laughs.)

TRT: There is a CBS interview that sites you as planning on being here for maybe 8 or 10 years, if so. And even then, you’ll be too young to run for President. (All Laugh) Were you thinking about this in the future?

AM: Not right now, I’m just focused on being Mayor. I mean it is proof that I just want to be a Mayor. If I thought there was a trajectory you had to take to become mayor, I certainly would have taken a different position. This is the position that I want, the position that I have wanted and the position I think I can make the most influence on the city of Holyoke, more so than a state rep, a state senator, governor. To really have an impact on your local community is to be the mayor. To be the Mayor of my hometown too is incredibly special.

TRT: What was it within the campaign that really reached out to the voters and impacted them enough to give them confidence that a recent college graduate could handle the position like the Mayoral position?

AM: There were a number of things all at the same time. I think we’ve been so ok with the status quo for so many years and my argument was that we’ve had the same people around the table for 20 or 30 years and we are talking about the same issues we were 20, 30 years ago. We still have a high dropout rate in high schools, high crime, high unemployment. What have the people with direct tangible political experience gotten the city of Holyoke? You know, I talked about my experience, born and raised in Holyoke, went to the public schools, when out to Brown, interned in the Mayor’s office, did Holyoke for All, worked at Career Point for the last 4 ½ years and at this exciting time in Holyoke’s history, with a new high performance computing center, starting to revitalize downtown, what kind of Mayor do we want? We need a Mayor that was raised in the digital age. That was an argument that I made so instead of seeing my age as a deficit, you have to it as an asset. I never once bought into the language of my opposition and if I did, then I’d be acknowledging the arguments that somehow my youth was a disadvantage. When, the entire time, it was an advantage because I know what is happening at the computing center, I know that the fact that I’m 22, I haven’t been around long enough to be discouraged or pessimistic, I won’t be holding a particular special interest because I haven’t been on the council for 15 years. I was able to reframe the conversation in that sense so when people thought about my age, they thought that Holyoke needs youthful energy, it needs someone optimistic, and the fact that I don’t have kids and the fact I’m single is another great reason  to vote for me because I can dedicate my life to this position.

TRT: How did you reach your constituents in such a short period of time?

AM: I knocked on every door in the city of Holyoke, the white neighborhoods and the Latino neighborhoods. We raised the money. I raised almost just as much money as the [incumbent] Mayor … There was never a time that I thought I was going to lose. I wouldn’t have run if I thought I was going to lose. Every decision that I’ve made throughout the past two years has revolved around this race and what I wanted to do. You have to be incredibly focused on a goal. If you’re going to run, you aren’t going to win if you don’t. Everything I did, every person I met with, every event I went to, everybody I talked to revolved around the election and making sure that it put me one step forward.

AM: Throughout my entire life, I’ve demonstrated that I’m open to different languages, different cultures and different people. I haven’t stayed in my comfort zone, I go out of what white people do and I’ve acknowledged the privilege that I have and I’ve tried to move beyond that. Just being able to have that conversation is powerful for people and just to show up. The power in your presence, you can’t match it. The fact that I show up at events in the Latino community, engage with people, and not just in the political and professional sense, but I’ve chosen people around me who, my best friends and what not, are Latinos. Not a lot of people, white people anyway, can say that, except workplace relationships. I think that is something that people have noticed.

TRT: Considering the difficulty that Holyoke has had economically, what is going to be your economic focus when you first step into office?

AM: There are already a bunch of projects in the pipeline that I need to complete and take advantage of. The high performance computing center is a top priority of mine and making sure we pull off that $168 million investment from Harvard, MIT, Northeastern, UMASS … We expect it to be completed in the fall of 2012. That is really a catalyst for new development to bring to startup companies and entrepreneurs all across the country, saying we have true great energy, that’s why Harvard invested so much money into downtown Holyoke. The utility costs … we have some of the cheapest in the state and throughout New England … Right now, we do not do enough marketing so my top priority is to really rebrand Holyoke. We’ll start doing that in January. You know, our logo right now is smokestacks with smoke coming out. That doesn’t represent Holyoke today so throughout this campaign, I talked about bringing us from the paper city to the digital city so when people think Holyoke, they think digital, they think technology, they think art and innovation.

I’ve gotten so much national attention just from the victory that people are emailing me and calling me and want to meet me just because they’ve never heard of Holyoke and all of the sudden they are thinking about it. That’s great because we’ve got to take advantage of the spotlight and put it back onto Holyoke.

TRT: What will you do to rebuild downtown and make it inclusive for everyone?

AM:  A challenge for us is to bring new people to move to the city of Holyoke. For us to have a viable downtown, we need people there. We also need to rebuild the middle class, make sure that folks have money in their pockets to spend at restaurants and cafes. There are really limited options if you want to grab a bite to eat after 5 p.m. in downtown Holyoke. I believe there is a constituency that would support a restaurant or nightclub, bar. I’m hoping we can get a gay bar established in the next 12 months. There are a couple of potential sites to make that happen. I mean a gay bar, yes, but also places of freedom, places for people to go out safely at night, LGBT inclusive spaces in the downtown. We have a lot of youth groups but we need actual establishments to rebuild some sort of a night life and that relates to public safety. Crime happens because the city is not lit up. If the city is lit up, less crime is likely to happen. Young people are likely to move here. They don’t want to just live and work. They need to have a good time and feel like there is a culture. We need to rebuild that culture with restaurants, bars, nightclubs, and that is something I’ll be pushing for and in my vision, definitely.

TRT: Northampton obviously has been dubbed as the LGBT mecca really of Western Massachusetts …

AM: Well, Northampton doesn’t have a gay mayor. (Laughs)

TRT: Considering that point, in the past Holyoke hasn’t really been the place to go for the LGBT community.

AM: Already, on a superficial level in terms of perception, the fact that we’ve elected a 22-year old progressive openly gay person to be the Mayor of Holyoke has done wonders for our perception in a really short amount of time. People in Holyoke aren’t just excited about my election, but I go to Northampton, Amherst, East Longmeadow or Springfield and everybody knows who I am and they’re talking about me. I think for a lot of people, not even in Holyoke, they think this is our chance to really move Holyoke forward. In terms of LGBT, in just the young people I’ve seen and messages from young LGBT kids, they think this is the best thing in the world that I’m young, gay and the Mayor and that feels really good …  I’m in a meeting next week about bringing a PFLAG chapter to Holyoke.

TRT: Are there plans for a Holyoke Pride?

AM:  Yea, we will definitely have that conversation. It’s a new day in Holyoke politics.

The inauguration of the City of Holyoke Mayor, City Councilors, and School Committee Members will be held at Holyoke High School on January 3rd located at 303 Beech Street at 9:30 a.m. Morse’s Inaugural celebrations will take place on January 14 and 15.