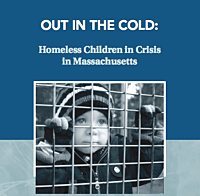 BOSTON, Mass. — The Massachusetts Law Reform Institute issued a report yesterday titled “Out in the Cold: Homeless Children in Crisis in Massachusetts,” and today marks the first-ever National Youth HIV and AIDS Awareness Day. AIDS Action Committee supports both efforts to raise awareness of the needs of homeless families and young people. Homelessness increases risk of HIV among all populations, and unstable housing makes it harder for those living with HIV and AIDS to care for their health needs.

“We agree with the conclusion in ‘Out in the Cold’ that the state needs to embrace new policies that make homeless families with children and teens eligible for shelter and housing immediately,” said Rebecca Haag, President & CEO of AIDS Action Committee, which signed a letter to Governor Patrick and legislative leaders last October calling for a change in the Emergency Assistance regulations. “We work every day with mothers struggling to care for themselves and their families. It is nearly impossible to follow through with medical care instructions, particularly those that come with a complicated chronic disease like HIV, when you are worried about where you and your children are going to sleep that evening.”

AIDS Action Committee operates a housing program that assists people living with HIV/AIDS find stable housing. AIDS Action has three transitional housing programs and access to permanent, congregate, and scattered site housing units throughout Greater Boston. AIDS Action Committee also works to meet the needs of street-involved and homeless youth through Youth on Fire, a program that helps youth who are homeless or in unstable housing situations. We provide assistance in finding housing, mental health services, a connection to health care and other support necessary for them to address their long term goals. Youth can also get a meal, take a shower, do some laundry, get tested for HIV, STDs and rest in a safe, welcoming space.