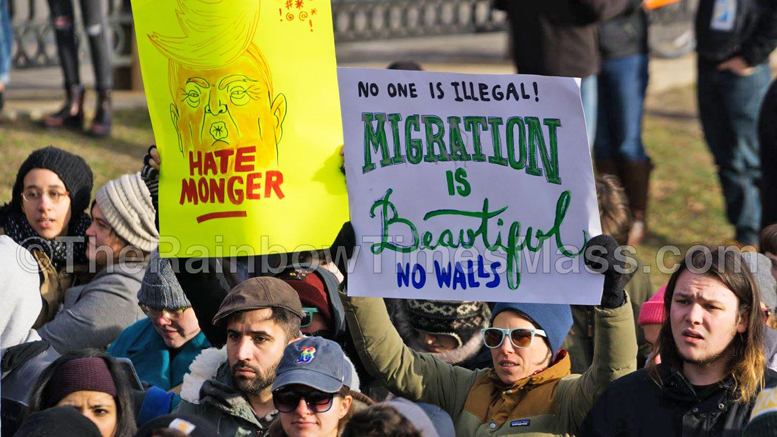 One of the many human rights protests launched since Trump took office. Photo: The Rainbow Times/Steve Jewett

LGBTQ acceptance is on the decline, according to a recent Harris Poll survey commissioned by GLAAD that examined the state of acceptance in 2017. In an environment stifled by repulsive acts towards the LGBTQ community and its vast intersectionalities at government and civic levels, it is no surprise that the numbers reflect such ignorant, arrogant and misguided perspectives.

“Four years ago, GLAAD commissioned The Harris Poll to launch a first-of-its-kind index to measure American attitudes toward lesbian, gay, bisexual, transgender, and queer (LGBTQ) people and issues,” wrote Sarah Kate Ellis President & CEO, GLAAD in the Executive Summary of the survey results. “Each year, [GLAAD’s] Accelerating Acceptance report showed positive momentum. Year over year, Americans said they were more comfortable with LGBTQ people and more supportive of LGBTQ issues. These results paralleled historic steps in LGBTQ visibility in our culture as well as the passage of marriage equality nationwide and other pro-LGBTQ legal wins.

“This year, the acceptance pendulum abruptly stopped and swung in the opposite direction. More non-LGBTQ adults responded that they were ‘very’ or ‘somewhat’ uncomfortable around LGBTQ people in select scenarios. The decline is paired with a significant increase in LGBTQ people reporting discrimination because of sexual orientation or gender identity.”

Results of the survey were dismal, to say the least. In an era that is ruled by bullying, deceit, and petulant tyrant-like behavior, it is not surprising that the state of LGBTQ affairs would be on the decline. However, in just one year, so much progress under the Obama administration has been derailed.

As GLAAD described on its website, some of the critical survey findings included:

There have been attacks against the LGBTQ community repetitiously since the Trump administration took over the White House. Nearly all rights gained have been challenged to some degree or another. Just hours after the inauguration, the LGBT content mantled on official government websites was scoured from the White House, Department of Labor and Department of State URLs. If that doesn’t signal discriminatory intent and inner workings of the minds behind such division from the start, I don’t know what does.

In February 2017, the attacks against the transgender community began when the “Trump administration announced plans to rescind Obama-era guidelines that barred discrimination against transgender students,” reported _The Rainbow Times_. “The federal guidelines were based on policy pioneered in Massachusetts. The guidance asserts that denying transgender students equal access to school programs and activities in accordance with their gender identity is a violation of Title IX, the federal law that prohibits sex discrimination in public schools.” Later that same year, Trump proposed a transgender military ban, which he ultimately lost.

The Department of Justice policy interpreting Title VII of the 1964 Civil Rights Act of 1964, which prohibits sex discrimination, and also discrimination based on gender identity was reversed, LGBT Pride Month was ignored, the Presidential Advisory Council on HIV/AIDS was dismantled, “religious liberties” have surfaced again and are condoned to be used as a license to discriminate against the LGBTQ community and other marginalized groups.

Women’s rights have been trampled on and reproductive health choices have been stripped away. Immigrants brought to this country when they were children have been torn away from their families in the United States and sent back to countries that they have no ties to, and often times do not even speak the language needed to survive there. Trump has diminished and demeaned the dire situations of refugees who flee their countries of origin due to situations far beyond an individual person’s control such as war, famine, and social norms that quite literally could mean the death penalty for anyone belonging to the LGBTQ community. This administration has grossly signaled to the world that marginalized groups are not a part of his priorities, not even close to it. As a matter of fact, I believe Trump’s thought process is more in line with “jokingly” claiming that Mike Pence preferred to see gay people hanged. I believe there is a modicum of truth to that.

But, have people’s perspectives really changed that much in a year? Or, is it simply that they are emboldened by the “faux” Leader of the Free World to voice their opposition to others in ways that were otherwise unacceptable, inexcusable, and despicable that would carry serious consequences?

Every day is a battle—a battle for life, a battle for those who are less privileged than you may be, a battle for truth and justice to prevail, a battle that good will win over evil. Despite what these survey percentages indicate, more Americans are rising up to counter hate in every way imaginable—marches, business partnerships, non-profit development, education, social media strategies, speaking out and holding each other up—even though each day is a battle.

What I know for sure is that history repeats itself and the only way we can move ahead is by battling these wars together. Ellis, from GLAAD, is right. The negative change in the survey results “can be seen as a dangerous repercussion in the tenor of discourse and experience over the last year. [The year] 2017 brought heightened rhetoric toward marginalized communities to the forefront of American culture. … LGBTQ visibility slipped in news and entertainment media—Americans can no longer see LGBTQ stories that change hearts and minds with the same frequency.” My only question to you is what are you going to do about it? Be visible. Be proud. Never surrender. This is a battle.

*Nicole Lashomb holds a BM from the Crane School of Music (SUNY-Potsdam), and an MBA from Marylhurst University. She has been a social justice advocate for more than a decade, often writing and speaking at events on various human rights topics. You can reach Nicole at editor@therainbowtimesmass.com.