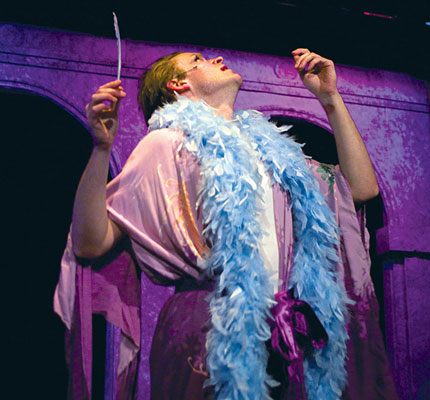 Peyton Pugmire as Prior Walter in The Umbrella’s production of Angels in America: Part 1 – Millennium Approaches
Photo: Meghan Donnelly

Peyton Pugmire as Prior Walter in The Umbrella’s production of Angels in America: Part 1 – Millennium Approaches
Photo: Meghan Donnelly

CONCORD, Mass.—The Umbrella Community Arts Center in Concord Massachusetts will bring Angels in America: Part 2 – Perestroika to its stage from October 3 – 18. The production follows The Umbrella’s staging of Angels in America: Part 1 – Millennium Approaches, which closed the 2013-2014 season and received nine DASH Award nominations, including Best Lead Actor in a Play and Best Production of a Play.

In connection with its productions of Angels in America Parts 1 and 2, The Umbrella has formed a special partnership with Fenway Health (www.fenwayhealth.org), a Boston-based organization whose mission is “to enhance the well being of the lesbian, gay, bisexual and transgender community and all people in their neighborhoods and beyond through access to the highest quality health care, education, research and advocacy.” As part of the partnership, $1 of every ticket sold to performances of Angels in America: Perestroika will be donated to Fenway Health. In addition, Angel Sponsors begin at the $100 level with 10% of all sponsorship funds raised going to Fenway Health. Sponsors who donate before September 25 will be acknowledged in the show’s Playbill with the option to honor a loved one. [pullquote]Fenway Health also recognizes the role of the play itself in increasing awareness of HIV and AIDS. “Fenway Health is pleased to partner with The Umbrella on parts 1 and 2 of Angels in America, ” says Timothy Harwood, Vice President of Development at Fenway Health. [/pullquote]

“It has been great working with Fenway Health to develop a program that is meaningful on multiple levels,” says Claudia Bard Veitch, Director of Development at The Umbrella. “You can support the good work of Fenway Health, enable The Umbrella to continue producing quality shows, and honor a special person all in one gift.” Fenway Health also recognizes the role of the play itself in increasing awareness of HIV and AIDS. “Fenway Health is pleased to partner with The Umbrella on parts 1 and 2 of Angels in America, ” says Timothy Harwood, Vice President of Development at Fenway Health. “With 700 new cases of HIV infection reported in the Commonwealth of Massachusetts each year, Angels remains a timely reminder of the need for information, education and compassion. We salute the Umbrella for taking on this important work.”

Angels in America: Perestroika isthe rarely performed conclusion to Tony Kushner’s award-winning, epic drama about AIDS, homosexuality and religion. Set in 1980’s New York, the play depicts the changing relationships of its central characters against the backdrop of the AIDS epidemic. “Angels in America stands today as one of the most important pieces of American theatre. Even 20 years later, it still holds relevance and has even proven to be prophetic in many ways,” says Brian Boruta, Director of Performing Arts at The Umbrella. “Because the play is so challenging to produce, it is rarely seen, and since the playwright states that each part stands on its own, part 2 is even rarer. It has been nearly a decade since the last major Boston production, so it felt like the community was ready to revisit Kushner’s words.” [pullquote]As part of the partnership, $1 of every ticket sold to performances of Angels in America: Perestroika will be donated to Fenway Health.[/pullquote]

The Umbrella’s production of Angels in America: Perestroika is directed by Elliot Norton, Award Winner Nancy Curran Willis and runs from October 3 through October 18 at The Umbrella Community Arts Center, 40 Stow Street, Concord, Massachusetts. Tickets are $20 for adults and $15 for students and seniors. A staged reading of Angels in America: Part 1 – Millennium Approaches will also take place on September 12 and 13. To become an Angel sponsor or to purchase tickets, visit www.theumbrellaarts.org or call 978.371.0820.

The Umbrella enriches lives and builds a vibrant community through the arts. We inspire creativity, learning, and personal growth through education, performing and visual arts, cultural events, and community collaborations. Each year we engage, excite, and educate people of all ages – from toddlers to seniors – in the arts. Our performing arts and events draw thousands to our 400-seat theatre. We present approximately 10 exhibitions per year including curated, juried, and non-juried exhibitions and works by local, regional, and national artists. Our popular Musketaquid Arts and Environment program links discovery of art with passion for nature. Our community of 50 artists adds tremendous vitality and inspiration. For more information please visit us online at www.emersonumbrella.org or call 978-371-0820. Please like us on Facebook and follow us on Twitter and Instagram.