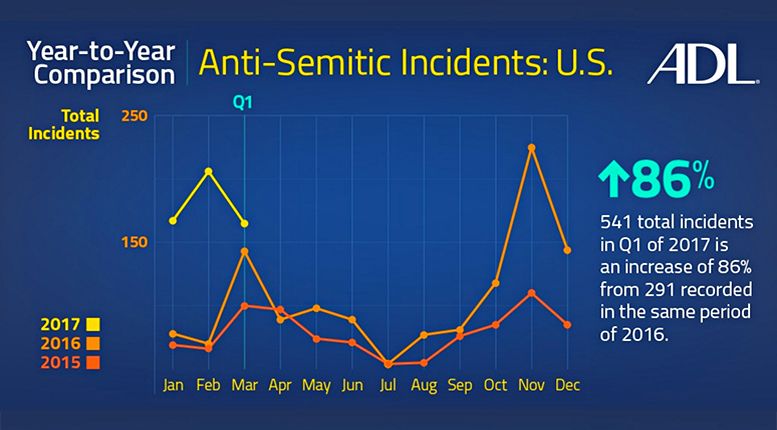 By: Chris Gilmore/TRT Reporter—
Although earlier this month the U.S. Senate passed a resolution condemning “anti-Semitism, hate crimes, bias and discrimination in all forms,” incidents of hatred against the Jewish community have drastically escalated in 2017, read a new report by the Anti-Defamation League (ADL).

And this past weekend, not even Salem, Massachusetts was an exception to this act of hatred when a swastika was spray painted on the city’s Pavilion located in the Salem Common.

“I am sorry to report that sometime over the weekend a swastika was painted on the bandstand at Salem Common,” said Salem Mayor Kim Driscoll. “Our Police Department is investigating this incident and will be reviewing surveillance cameras to try and determine who committed this heinous act. Whether it was undertaken with malicious intent or stupidity, this action needs to be condemned in the strongest possible terms.

“I would like to believe that this is an isolated incident in our city, but given today’s Boston Globe story on similar occurrences in other cities, it is evident that no community is immune from hatred and that we must remain ever vigilant in our denouncement of these types of actions and more importantly, in our support for combating bigotry and hatred in any form.”

But, U.S. incidents involving harassment of American Jews, “particularly since November” have jumped to 86 percent in the first quarter of 2017, new data from the organization shows. The 2016 presidential election and the heightened political atmosphere played a role in the increase, according to the ADL.

In the first quarter of 2017, preliminary reports of the 541 anti-Semitic incidents included:

Jack McDevitt, director of the Institute on Race and Justice at Northeastern University said to the Boston Globe “traffickers in hate focus on any target that is available, including people of color, Muslims, and those who are gay, lesbian, bisexual, and transgender. But Jewish people and organizations may bear a larger brunt of the offenses because synagogues and Jewish cemeteries are easy to find, and Swastikas easy to paint.”

Continuing a consistent trend, the states with the highest number of incidents tend to be those with large 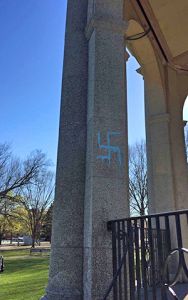 North of Boston, Mayor Driscoll vowed to fight to keep Salem a welcoming place for all.

“The very name of our community emanates from the Hebrew word for peace—Shalom,” read Driscoll’s statement. “In Salem, we strive to be a welcoming and inclusive city and in the wake of this incident we will continue our work with our community partners like Salem’s No Place for Hate Committee, the ADL, and others to continually educate, advocate and work toward that goal,” Driscoll expressed via a statement sent to the media. “We must be tireless in our efforts to bridge our differences and continue to support each other within the diverse, vibrant community we are fortunate enough to call home.”

Immediately following this story, a group of Salem, Boston and nearby Massachusetts residents decided to start a GoFundMe Campaign to benefit the ADL. This campaign is facilitated by Salem No Place For Hate, Action Together North Shore, Salem No Place For Hate Community Engagement Subcommittee and The Rainbow Times.

ADL has been tracking anti-Semitic incidents in the United States since 1979. The audit includes both criminal and non-criminal incidents acts of harassment and intimidation, including distribution of hate propaganda, threats and slurs.  Compiled using information provided by victims, law enforcement and community leaders and evaluated by ADL’s professional staff, the Audit provides an annual snapshot of one specific aspect of a nationwide problem while identifying possible trends or changes in the types of activity reported. This information assists ADL in developing and enhancing its programs to counter and prevent the spread of anti-Semitism and other forms of bigotry.