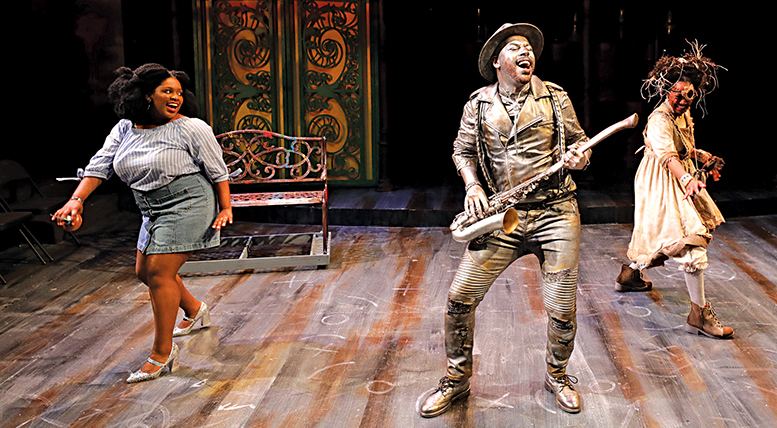 By: Edward Byrne/TRT Arts Critic—
Like most, my childhood memories of “The Wizard of Oz” are defined and colored by the 1939 film starring Judy Garland. I always loved the scene where Dorothy et alia finally arrive at the Emerald City and are treated to all the luxury Oz has to offer: Scarecrow is fluffed with more hay, Tinman gets buffed, and even the Lion is primped with a bow for his mane. It all seemed too good to be true for these anthropomorphic characters and, of course, it was.

Later in life, I saw the 1978 film version of “The Wiz,” a retelling of the classic in an African-American context. What captivated me about “The Wiz” then and now is that it’s not just a black interpretation of “The Wizard of Oz,” or the same story in a black context. “The Wiz” is a counterpoint to a dominant cultural narrative and product. It’s both an acknowledgment of the silencing of black narratives in art and mainstream popular culture as well as an allegory for the development of racial identity.

Lyric Stage Company of Boston’s current production of “The Wiz,” running through July 1, isn’t Dorothy in an early 20th Century Kansas dust bowl, nor is it set in a Harlem park mired in 1970s urban decay. Producing artistic director Sprio Veloudos explains that what we’re seeing is the 2018 contemporary landscape of Oz; and the director of this production, Dawn M. Williams, delivers.

This “Wiz” occupies a unique space of being good, different, important, and fun all at the same time.

After some prologue—and the tornado—Dorothy, played by an earnest Salome Smith, encounters the hilarious and bumbling Addaperle (Yewande Odetoyinbo), the good witch of the north. Addaperle’s magic never seems to work the way she intends, and the gags for us are plentiful.

Addaperle convinces Dorothy that for her to get home she really needs to see The Wiz, in a strong rendition of “He’s the Wiz.” Then we get to the journey: easing on down the yellow brick road. In keeping with the contemporary nature of the production, this yellow road has no bricks, but illuminated yellow poles to lead the way. While this artistic choice requires some imagination, it reinforces the notion that this journey was never about miles traversed, but rather a developmental journey towards self-actualization.

Dorothy encounters the expected characters along the way: Scarecrow (Elle Borders), Tinman (Steven Martin), and Lion (Brandon G. Green). Each sings a convincing tune about their struggle and they join Dorothy to see The Wiz in hopes of getting brains, heart, and courage, respectively. Martin stands out for his moving vocal talent. When you hear his soulful delivery, especially in “What Would I Do If I Could Feel,” you can’t help but think: he’s got heart already. He reminds us that everyone in this play is in search of something that is already within them.

When they arrive in the Emerald City, there are no manicures or perms or funky disco promenades. Oz is the coolest club around and you need special green glasses to get in (and Dorothy’s special shoes). Coat check to your left.

The Wiz, played by the excellent Davron Smith, in dazzling suits by costume designer Amber Voner, agrees to see Dorothy and her friends and makes them a deal: kill the wicked witch of the west and they’ll get … well, you know how it goes.

Throughout this production, there is a stunning orchestra under the direction of Allyssa Jones, whose only fault is they sometimes drown out the actors who sing without amplification.

And yet, with all the brainpower, heart, courage—and especially talent—on and off stage, this production of The Wiz sometimes doesn’t quite feel at home. The Lyric always seems to find ways to make an inflexible space feel different with each production. But here, big numbers including the iconic “Ease on Down the Road” and the liberation anthem, “Everybody Rejoice (Brand New Day)” feel small, constrained, and like they could use a few more voices and bodies. The ensemble, with interesting and contemporary choreography by Jean Appolon, doesn’t always seem to know why they’re there. The conceptual nod to New Orleans never quite materialized. It’s there in costumes, the ensemble, and scenic design gestures by Baron E. Pugh, but it all feels extraneous. Since there’s no place like home, why are we going to NOLA?

Still, I wouldn’t miss this production. It warms your heart, reveals something about your own understanding and pursuit of self-identity, and just might give you the courage to sing along when the spirit moves you.

*Edward Byrne is an educator, artist, writer, and consultant on diversity, equity, and inclusion. His work has included theatre and other performing arts projects that help audiences develop cultural humility and explore new possibilities for social justice. He lives in Dorchester, Massachusetts.