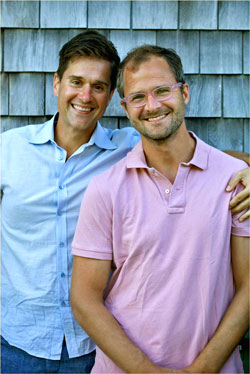 Called “the next Martha Stewart’s” and “one of the fastest growing lifestyle brands in America,” the Beekman Boys’ journey began when they bought the Beekman Farm in upstate New York. A mere five years later they have a hit TV show that has put their stylish stamp on seasonal living, five bestselling books, product lines in leading retailers, a massive social following, and a James Beard nominated lifestyle website.

Starting on Friday, April 25, fans will be able to get up close and personal with the Boys as they showcase their line dancing skills during the Gays for Patsy Annual Provincetown Spring Stomp. Then, on Saturday, guests will be able to partake in three special events starting at noon with How to Make the Most of the Spring/Summer Bounty in which the Boys will sign copies of their books and share their little-known tips and tricks for creating simple, delicious vegetable dishes. Starting at 3 pm, mixologist Corey Sievers will show how Sage uses herbs and other garden ingredients to create their award-winning cocktails.

Owned by Jeanne Leszczysnki and partner, Diane DiCarlo, the Sage Inn & Lounge opened in 2012 following a major renovation. A quiet destination situated in the heart of Provincetown’s Commercial Street, Sage blends historic charm with contemporary sensibilities and zen-like touches. Individuals can recharge in one of 19 rooms or in the intimate Lounge area serving everything from herb-infused cocktails to tapas-style small plates. In addition, the facility boasts two private event spaces, which play host to weddings, corporate and food events.

“We’re looking forward to an exciting and fun-filled weekend,” said Leszczysnki. ”I can’t think of a better way to spend a spring weekend then being surrounded by the beautiful sites in Provincetown, outstanding food and great company.”

Costs for the weekend’s events range from free to $75 per person for the dinner. Hotel rooms are also available starting at $100/night. For more information, visit http://sageinnptown.com/data/uploads/beekman_april.pdf.