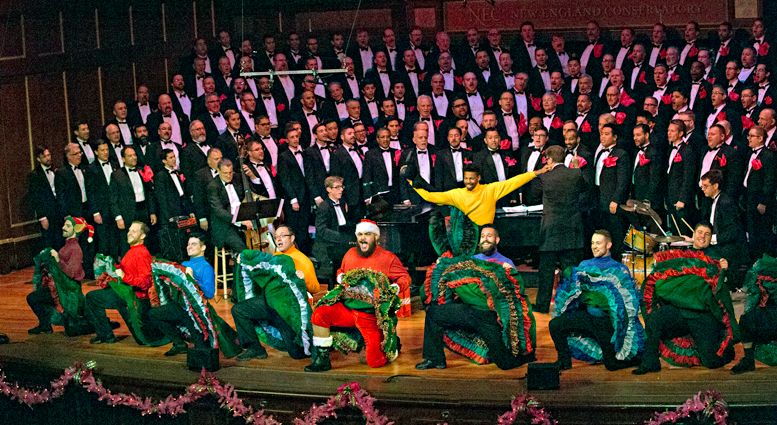 BOSTON, Mass.―Boston Gay Men’s Chorus (BGMC) is proud to present Jingle All the Way, a holiday concert of traditional carols reimagined, beloved classic Christmas songs, and contemporary works from Grammy-winning composer Craig Hella Johnson and others―all wrapped up in BGMC’s signature blend of class and camp. Performances are on Dec. 3 as part of Holly Folly in Provincetown and on Dec. 11, 16, 17, and 18 at New England Conservatory’s Jordan Hall in Boston.

“Our holiday concert is quite traditional this year―but it will be delivered with a BGMC twist,” said BGMC Music Director Reuben M. Reynolds, III. “We’ll have carols recast in a jazz idiom, a raucous rendition of ‘Jingle Bells,’ and a cover of the Weather Girls’ disco hit, ‘Dear Santa (Bring Me a Man This Christmas).’”

Jingle All the Way will showcase English composer Will Todd’s arrangements of “We Three Kings,” “In the Bleak Midwinter,” and “Personent hodie,” which he set in a jazz idiom, originally for the choir of St. Martin-in-theFields in London. The chorus will also perform “Evening Prayer,” a new piece by Norwegian composer Ola Gjello based on a prayer written by St. Augustine; and “Lo, How a Rose E’er Blooming / The Rose,” by Grammy-winning, Texas-based composer/conductor Craig Hella Johnson. Hella’s inventive arrangement interweaves verses of the traditional carol with the title song from the 1979 Bette Midler film The Rose.

In addition to more standard versions of holiday classics like “Deck the Halls,” “The First Noel,” and “Joy to the World,” the chorus will also serve up choreographed showstoppers, including legendary MGM arranger Kay Thompson’s rendition of “Jingle Bells,” “I’m Wishing You A Drag Queen Christmas,” and “Dear Santa (Bring Me a Man This Christmas),” written by former Late Show With David Letterman bandleader Paul Shaffer and originally recorded by the sensational disco-era duo The Weather Girls.

“We’re so excited for this concert because audiences will hear traditional carols in a whole new way, allowing them to rediscover old favorites and find new layers of meaning,” said BGMC Executive Director Craig Coogan. “This season is characterized by both quiet contemplation and joyous celebration and we can’t wait to create those experiences for others―and share in them.”

In its annual holiday concert, Boston Gay Men’s Chorus promises traditional favorites and new surprises that will fill Jordan Hall with the merriment of the season. It’s the most wonderful time of the year when BGMC puts the Merry into Christmas!

Boston Gay Men’s Chorus creates musical experiences to inspire change, build community and celebrate difference. The BGMC is one of New England’s largest and most successful community-based choruses. Founded in 1982, the 175-voice ensemble is celebrated for its outstanding musicianship, creative programming, and groundbreaking community outreach. Under the dynamic leadership of Music Director Reuben M. Reynolds III, the BGMC sings a wide spectrum of classical and popular music and creates social change by providing a positive, affirming image of the gay and lesbian community. The Chorus is heard live by more than 10,000 people each season and thousands more through recording, television and internet broadcasts. In November, 2013, CBS-WBZ named The Boston Gay Men’s Chorus one of the “top five” choruses in the city of Boston. In June 2015 BGMC became the first gay chorus to tour the Middle East.