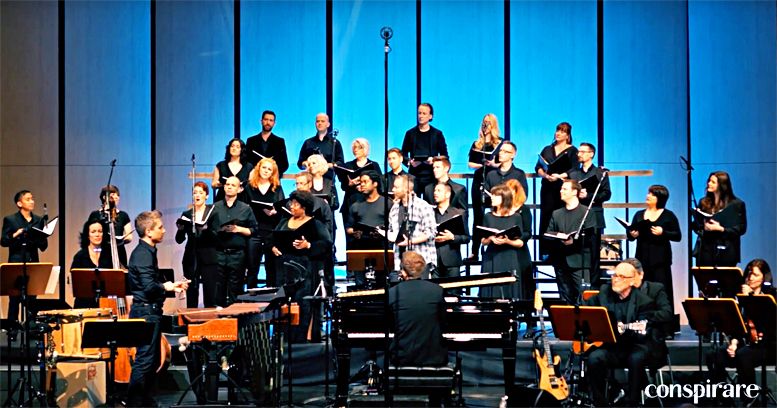 Berklee presents Grammy Award-winning vocal ensemble Conspirare in a performance of Considering Matthew Shepard, a moving, three-part contemporary oratorio composed by Craig Hella Johnson. In 1998, a shocking hate crime was committed against Matthew Shepard, who was brutally beaten and left to die in a Wyoming field at age 21. Shepard’s story haunted Johnson for years and impelled him to compose a musical response to the tragedy.

Conspirare’s Boston premiere of Considering Matthew Shepard will be staged at Symphony Hall on Sunday, February 5, 2017 as part of Berklee’s Signature Series. Tikets are available online and at the Symphony Hall box office, located at 301 Massachusetts Avenue.

Considering Matthew Shepard transports the audience through a tapestry of musical textures and styles in a poignant concert experience inspiring hope, compassion, and empowerment.

The Washington Post reported, “Like Bach’s large-scale choral works, this spellbinding piece draws on many styles masterfully juxtaposed, though Johnson’s sources are the American vernacular” of “spoken text, cowboy song, American hymnody and popular song, spirituals, jazz and dazzling polyphony,” resulting in an impact that is “immediate, profound and, at times, overwhelming.”

An album version of Johnson and Conspirare’s Considering Matthew Shepard debuted at No. 4 on Billboard’s Traditional Classical Chart following a September 2016 release on the Harmonia Mundi label. Conspirare consists of 30 singers from all around the nation (including soprano Sonja DuToit Tengblad of Boston) and a chamber group of eight instrumentalists, founded by Johnson. The group won the 2015 Grammy Award for Best Choral Performance for their album The Sacred Spirit of Russia. Johnson serves as resident artist in choral music at Texas State University. He received his doctor of music degree at Yale University, and is a student of Berklee Online, studying songwriting and music publishing, among other subjects.

Johnson’s composition interweaves passages from Shepard’s personal journal, interviews and writings from Shepard’s parents, and newspaper reports, along with poetic texts from historic figures such as Hildegard von Bingen and Rumi, and contemporaries such as the Holyoke, Mass.-based writer Lesléa Newman, author of the groundbreaking children’s book Heather Has Two Mommies, and Michael Dennis Browne.

“Matthew and his story have led me on an inspiring, challenging, and deeply meaningful journey that I continue to this day,” said Johnson. “In composing Considering Matthew Shepard, I wanted to create, within a musical framework, a space for reflection, consideration, and unity around his life and legacy.”

Johnson debuted Considering Matthew Shepard in February 2016 at the AISD Performing Arts Center in Austin, Texas, where Conspirare is based. It has since played in Pasadena and Los Angeles, California. Founded 25 years ago, the Wall Street Journal notes that Conspirare “has become renowned for expanding the boundaries of choral performance.”