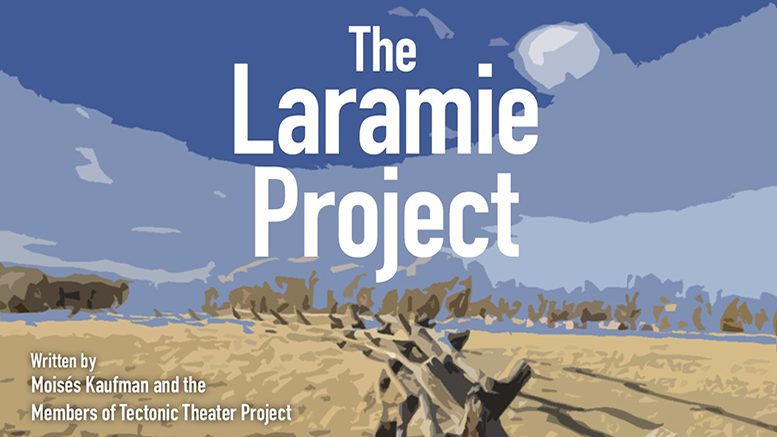 Available to view online April 29- May 6

Salem, MA—The Salem State theatre department presents The Laramie Project by Moisés Kaufman and the Members of the Tectonic Theater Project. A recorded performance will be available to view online April 29- May 6. Tickets are available at www.salemstatetickets.com.

In October 1998, a twenty-one-year-old student at the University of Wyoming was kidnapped, severely beaten, and left tied to a fence in the middle of the prairie outside Laramie, Wyoming. His battered body discovered the next day, and he died several days later in an area hospital. His name was Matthew Shepard. He was the victim of this hate crime because he was gay.

Over the next year, Moisés Kaufman and a team of writers and actors from Tectonic Theater Project took six trips to Laramie. They conducted over 200 interviews with citizens of the town. Some people interviewed were intimately connected to the tragedy. Others were not. These interviews transformed into The Laramie Project, a theatrical examination of the immediate reactions of Matthew Shepard’s community to the murder and to the underlying bigotry and hatred that enabled it.

Laramie Project director Bill Cunningham shares that “eleven years after Matthew Shepard was murdered, President Barack Obama signed into federal law The Matthew Shepard and James Byrd Jr. Hate Crimes Prevention Act. Yet, as the 23rd anniversary of Matthew’s murder approaches, the state of Wyoming — “The Equality State” — still has not passed legislation to recognize or seek to prevent hate crimes. Lawmakers have said that they are still hoping for more “stakeholder input.” It is our hope that, with this performance of The Laramie Project, audiences will empathetically respond to the story of Matthew Shepard, the people of Laramie, and all those impacted by his death. And we hope that the power of that empathy moves people to be stakeholders against the forces of hate.”

Judy Shepard will speak about her son Matthew’s story and her work as an LGBTQIA activist in a free virtual event on April 8 at 7 pm. Tickets for The Laramie Project are $10 general/free for students. Reservations for both events at www.salemstatetickets.com. Co-sponsored by the Salem State University Alliance. Note: The Laramie Project is intended for mature audiences. 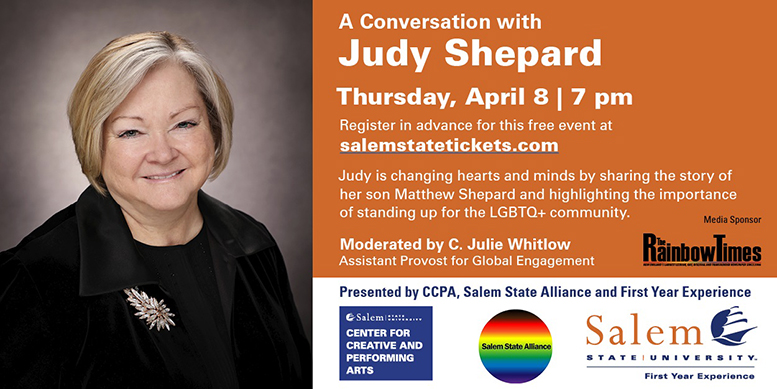 About the Center for Creative and Performing Arts

Salem State’s Center for Creative and Performing Arts (CCPA) provides the arts explorer a singular destination to experience world-class guest artists and award-winning student and faculty performances in dance, music and theatre as well as art exhibitions and spoken word events. The CCPA is committed to providing diverse, inclusive and affordable arts experiences to the communities on Boston’s north shore.

Salem State University, established in 1854, is a comprehensive, public institution of higher learning located approximately 15 miles north of Boston, Massachusetts. One of the largest state universities in the Commonwealth, Salem State enrolls about 7,300 undergraduate and graduate students. It offers 32 undergraduate programs and graduate programs that offer degrees in 24 fields. The university also has a continuing education division that offers both credit and non-credit programs. Known for the academic strength of its faculty, Salem State was named a Top Producer of U.S. Fulbright Scholars in 2011 and for the 2016-2017 academic year. The university is designated a Top College and University by Military Advanced Education and a Best for Vets College by Military Times. Salem State proudly participates in the National Study of Learning, Voting, and Engagement and has shown a student voting rate well above the national average, earning the university a gold seal from the ALL IN Campus Democracy Challenge.