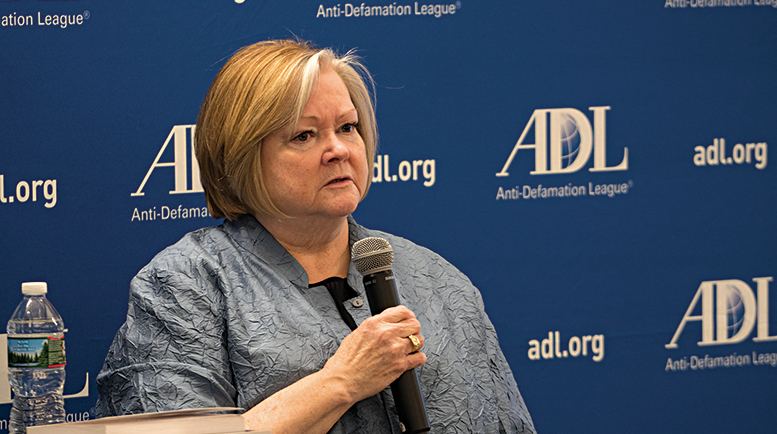 BOSTON—Speaking through tears, activist Judy Shepard revealed the pain and hope fueling her for nearly two decades in remembrance of her deceased gay son, Matthew, who was slain in 1998 during a brutal hate crime.

“We all feel compelled to do this work around Matt’s name because this is what he would have wanted to do,” Shepard said. “He’s not here, so we’re doing it.”

On January 30, the Anti-Defamation League of New England (ADL), as part of its “Breaking Barriers” speaker series, hosted Shepard. Speaking to a packed room of about 100 people, she told her story, and that of her son, in the context of her work for equality, awareness, and acceptance.

On the evening of October 6, 1998, Aaron McKinney and Russell Henderson lured Matthew to a Laramie, Wyoming field and proceeded to pistol whip and torture the 21-year-old openly-gay college student, reportedly after he made a sexual advance towards one of the men. Matthew was left tied to a fence with severe head injuries after the attack and was discovered the next day by a cyclist. He was in a coma for six days before being pronounced dead on October 12.

“Some saw this as a turning point,” said Shepard.

In the days following the attack, candlelight vigils were held around the world—and, at that time, in Boston, around 3,000 people gathered on the steps of the State House.

Although both were eligible for the death penalty, McKinney, after his parents brokered a deal with the district attorney, was sentenced to two consecutive life terms without the possibility of parole. Henderson—“a follower,” as described by Shepard—pled guilty to murder and received the same sentence.

Since then, Shepard has advocated for new legislation protecting LGBTQ people, given presentations all over the world on acceptance, and promoted “The Laramie Project,” a play that explored the reaction to her son’s death.

“It’s been 20 years of rewarding, frustrating, and sad, and joyous work, all at the same time,” she said.

“Breaking Barriers,” he said, “is about using the power of communication to foster understanding and action. Part of the mission here is to spread a message to adults, but most importantly to students that you can make a difference, that you can stand up. Part of this speaker series is to bring together people who have made an impact. One person can make a difference if they choose to do so. We want everyone to feel inspired and empowered to feel they can do it.”

“[If] you know your neighbor is gay, it should make it harder for you to be a homophobe”

Throughout the evening, Shepard made clear one of the guiding principles in her work was to tell Matthew’s story, and that personal stories are crucial to fostering acceptance of the LGBTQ community.

“I still think one of the turning points for the gay community, in particular, was young people, everybody, coming out and telling their story,” she said. “It’s easy to hate an abstract; it’s hard to hate a personal. [If] you know your neighbor is gay, it should make it harder for you to be a homophobe.”

She spent time painting a comprehensive picture of her son, allowing the audience to step into her world as a parent, and into Matthew’s world as a person.

“He was very small. He was about 5’2”, and weighed about 105 [pounds] on a good day,” she said. “He was very vain, and he loved to wear Ralph Lauren … That’s where he bought all his clothes. He was very preppy.”

She described Matthew as a nearly ubiquitous presence around school. As someone who was a friend to all, and someone with extremely strong opinions, she said she was often more worried about Matthew’s personality getting him into trouble than being targeted for his sexual orientation

“What I worried about more was his desire to argue with people. He was very opinionated, and if he disagreed with you, he told you so,” she said. “Not that he was gay, but that he was argumentative, and he just didn’t back down. He was just really annoying sometimes.

“The thing that struck me the most,” Whipple explained, “was that after so many years of progress, there’s [this] backsliding that’s going on right now that we have to be aware of. Also, it was interesting that all of this was bubbling under the surface during the Obama Administration … the haters were moved to hate so much more when we had a Black president … I come away encouraged.”

A Hard Road, Behind and Ahead

Shepard was one of many who pushed for legal protections for LGBTQ people who are victims of hate crimes.

“We all knew, as long as [former President George W.] Bush was president, that this bill was not going anywhere if it included LGBTQ individuals, because he made it very clear around his administration that he wouldn’t sign any legislation that favored the LGBTQ community,” she said.

Having her son’s name in the bill, Shepard said, was vindicating. With more than a decade of lobbying and activism work, she and her team created a lasting legacy for her son, and for the LGBTQ community as a whole.

“Being up there on the stage with the President and the family, it was really an emotional moment,” she confided.

Since the election of President Donald Trump, Shepard said the circumstances surrounding LGBTQ rights have become precarious, at best.

“The current administration and the cabinet … none of them are pro-LGBT. In fact, all of them have strong records of being anti-LGBT,” she said. “My friends in the State Department are just fleeing because the morale there is just rock bottom. The new attitude towards civil rights is just gone.”

Yet amid the new climate surrounding civil rights, Shepard said her work is now focused on spreading her message to young people around the world.

As part of her participation in “Breaking Barriers,” she has been speaking with students, hoping that her son’s story will inspire future generations to fight for equality and act on the political stage to ensure civil rights for LGBTQ people—and all other marginalized groups—becomes the norm.

“I’m hoping they still are malleable … I’m trying to communicate respect for everybody. We are all the same. In the core we are all the same,” she said. “I try to convey to them that it’s up to them to vote and participate, to be aware, to educate themselves, and to not just let things go.”

Shepard also said some strides have been made, evidenced by personal encounters after her speaking engagements.

“Several times during the process, students and professors would come see me, and they would give extra credit. So I have students who wouldn’t normally be in an audience around gay issues, “she said.” Numerous times they’d come up to me after and say, ‘You know, you make a lot of sense, and you’re making me rethink my past positions.’ That’s a good day.”

“We need to encourage others”

Events such as “Breaking Barriers,” Trestan said, are needed to fight back against what he perceives as an increasing threat of hatred, intolerance, and bigotry.

“Across the country there’s been an uptick in hate incidents, some rising to the level of a criminal offense, and some just people being harassed or being called names,” he said. “We’re living in a time now when all forms of hatred have seeped into the mainstream. We do not want to live in a world where hate directed at anyone is common, or accepted.”

Much of what Shepard said that night resonated deeply with attendees. Afterward, she was approached by young people and adults alike who supported her efforts to spread awareness about violence against LGBTQ people.

“It was motivational,” said Shelley Derby, an attendee. “We have to talk about not hating someone enough to kill them. I admire Judy’s courage and her willingness to not make it about her, and to make it about everyone else.”

Some didn’t share Shepard’s convictions about the hopelessness she expressed regarding the Trump administration.

“I disagreed with her attitude,” said Erika Kane, an attendee at the talk Tuesday night. “[Things] looked quite bleak. … I don’t think we’re going backwards; I think we can only go forwards.”

“It’s sort of like teaching grandma how to do the Internet. This is a whole rewiring of circuitry, that is required to recognize pronoun differences and gender fluidity, and then new vocabulary that is surrounding the LGBT community,” she said. “My generation, you didn’t even talk about gay, much less trans.”

“Basically, give up. Don’t talk to anybody about it, because it’s too hard,” said Eva Kennedy, an event attendee who echoed Kane’s criticism of Shepard’s views on pronoun usage. “But I thought it was a great event, and it’s nice to hear [about] all the stuff she’s doing, especially meeting with students and going to different schools.”