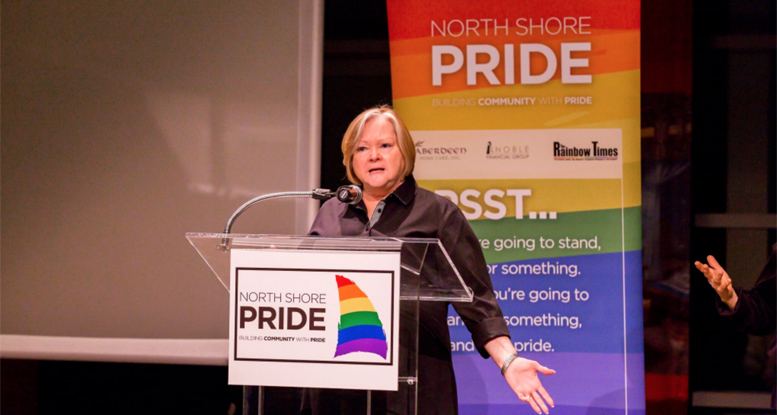 Flying off script, Shepard spoke directly to the audience about politics, voting, activism and the importance of carrying on, regardless of the adversity met along the way.

“If you care about the gay community, the immigrant community, and people of color and minority religion, you are not apolitical,” Shepard said to the room of more than 200.

A Wyoming native, Shepard knows first-hand how conservative ideals negatively affects equal rights she said. Though she acknowledged that some progress has been made, there are still no hate crimes protections in the state where she resides; the very state where her son Matthew was brutally murdered 20 years ago for being gay.

“I’m really scared about the current administration and how we seemed to have taken a U-turn when it comes to civil rights for minorities,” she said. “But we are organized now. We have a voice. We have a loud voice. We have many voices. We are just not going to let that happen, right?”

“We found Judy Shepard’s message at the North Shore Pride event to be incredibly inspiring,” said Chrissy Kenney, Development Manager, Healing Abuse Working for Change (HAWC). “As an organization committed to supporting the LGTBQ community—and any survivor of domestic violence, no matter how they identify—we at HAWC are always humbled to be reminded of Matthew’s story and perhaps most of all, how his tragic death led his family to choose love over hate.”

“The response to this event was wonderful and candid,” said Hope Watt-Bucci, North Shore Pride President. “Many of those in attendance reported they were ‘moved’ by the message of love and acceptance from Judy Shepard. In addition, the evening offered an opportunity for people in our community with differing views to come together and have an open, honest and positive discussion of building Pride in their community.”

“There’s something wrong with you if you didn’t find Judy Shepard’s message inspiring,” he said. “The horrific way she lost her son is unimaginable to most of us, and how she has found the fortitude to turn around and give so much back in his name is nothing short of miraculous. One cannot sit by idly in good conscience and let our rights and progress be reversed.”