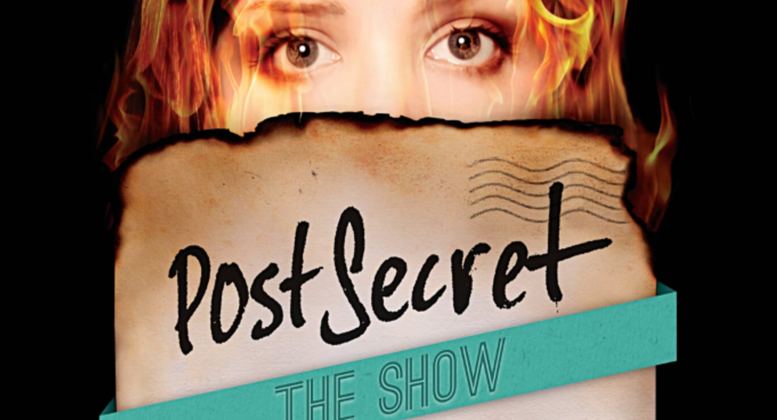 PostSecret: Unheard Voices is a visual, auditory and emotional journey through the beauty and complication of our deepest fears, ambitions, and confessions and it comes to life on March 22 and 23 at CityStage in Springfield, Mass. for two shows only.

With the assistance of projected images and video, three actors guide the audience through a crowd-sourced narrative of the stories behind never-before-seen secrets: sexual, sad, funny and controversial postcards that have made PostSecret.com one of the most popular blogs in the world.  With half a billion visitors, half a million anonymous secrets received and the release of 5 bestselling books, artist, curator and internet phenomenon Frank Warren has put together a team of theatre professionals to bring life to the unheard voices of PostSecret.

With the bravery of RENT and the surprising honesty of The Vagina Monologues, PostSecret: Unheard Voices is a breakthrough in audience sourced storytelling that reaches beyond the confines of the stage, reminding audiences that no matter what you may be facing, you are not alone.

In this exclusive interview, The Rainbow Times caught up with PostSecret creator Frank Warren to find out about the secret behind this thrilling performance series.

The Rainbow Times: What inspired you to create PostSecret?

Frank Warren: A boring job and keeping secrets from myself over the years. But once I started, I felt I had accidentally tapped into something full of mystery and wonder. It has been over 14 years now and the secrets keep coming from around the world. A ton—one postcard at a time.

Q: Why bring these anonymous secrets to the theater, specifically?

A: The postcards are like visual haikus; they offer us a glimpse into people’s most intimate lives. The dramatization allows us to bring to life the stories behind the secrets and explore our collective confessions even more deeply. For example, audience members can become part of the show by tweeting; taking a picture with a message written on a white board or having one of the actors read their secret from the stage.

Q: Describe the process from sharing a secret with you to selecting those secrets to be showcased in the show.

A: Many of the secrets in the show have never been seen before and some are new each night. They touch on every human emotion from the funny “I give decaf to customers who are rude to me”, mailed to me on a Starbuck cup to “Everyone who knew me before 9/11 believes I’m dead.” In the play we tell the stories of how secrets have changed lives forever, including bringing people together in marriage.

Q: In knowing people’s “secret” stories of heartache & tribulations, do they impact your overall well being adversely, positively or both?

A: Seeing secrets every day for over a decade has made me more understanding and tolerant. I think the experience has also brought me more empathy and compassion for others—and myself. Oh, and I am always very polite and kind to servers.

Q: What is the greatest reward in learning people’s secrets?

A: That even though our secrets feel like walls that separate us as we carry them alone, [they are not]. By sharing them, that illusion passes and we can recognize our hidden selves as bridges [and] instead, [the secrets] connect us with others and our deepest selves. This project has demonstrated to me the transformative power of our secrets.

Q: What types of topics are these secrets centered around?

A: What types of topics are poems or songs around? One common type of secret I receive is from someone struggling to find that one person they do not have to keep any secrets from. A person they can be vulnerable and whole before. I see that secret expressed dozens of ways on postcards every week.

Q: These secrets are anonymous. What happens if someone “confesses” a crime to you?

A: Well, sometimes the FBI contacts me.

Q: What secret impacted your life most positively?

A: The ones that help me to uncover secrets I have been hiding from myself.

I also like the confessions about hidden acts of kindness too. Like the ‘meter maid’ who when she is visiting other cities on her days off puts coins in meters about to expire.

Q: What does your family think about collecting all of these secrets? Do they worry about it?

A: They have mailed me secrets too. Not always anonymously. My wife mailed one years ago that read, “I always wanted to sleep with Richard Gere.”

Q: What do you hope the show brings to others?

A: I hope it entertains and maybe enlightens – but mostly that it leads to the most revealing conversation during your drive home.

Secrets are the currency of intimacy.

Tickets are available by calling the CityStage box office at 413 788-7033 or visiting citystage.symphonyhall.com.

For additional information, check out the websites below.