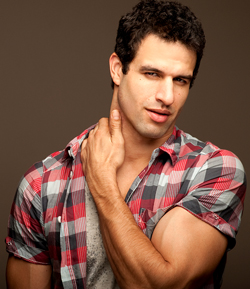 By: Randy Myers/Special to TRT–

After a brief stint as a professional baseball player, jumped at an opportunity to model in New York.

At 22, he was signed to the Ford Agency and became one of the most recognized male models in Manhattan. His Adonis form sold underwear and swimwear for 2xist, Polo Ralph Lauren and Dolce & Gabbana.

His agents encouraged Ben to take acting classes to broaden his marketability and make him eligible for commercials and soap operas.

Acting class became an addiction. Under the tutelage of famed drama coach Jennifer Gelfer, Ben found a therapeutic outlet for the anxiety he felt chasing his dreams in the big city. Class became a place Ben could lose himself and gain perspective on life by walking in another man’s shoes and embodying a character.

He was a natural and when Gelfer began casting the hunk for her new gay drama series, In Between Men, she turned to Pamies. He embodied so many of the characteristics as the show’s lead, Ben Reed. Both Bens are sexy and flirty but also intelligent and successful.

At first glance, the show appears similar to Queer as Folk. However, where the characters in Queer as Folk lived in the gayborhood, In Between Men depicts gay men living out and proud in the real world. Through wild adventures and racy storylines set against the fabulous backdrop of New York City, the show depicts how most gay men live today.

Pamies says he identified most with his character’s refusal to be defined by his looks and sexuality. Like the Ben on In Between Men, Pamies is a family guy whose career ambitions outshine even his looks.

Q. Many of us live in a perpetual state of in-between:  in between jobs, in between relationships, friends, family, and lovers … what are you living in between?

A. With a somewhat recognizable face through modeling, but yet limited credit in acting, I’d say I’m living in between my modeling and acting careers. I just moved to Los Angeles and everything seems brand new.

Q. Is acting your priority now?

A. Acting was an interest even through my modeling days. My hopes were always to use modeling as a platform to create a name and branch out towards an acting career.

Q. How have your looks helped or hurt your acting career?

A. I’m a pretty easy going, laid back guy. It’s been a struggle at times to own my look and meet the expectations that come with a strong presence.

Q. Can you relate to the characters in In Between Men who are trying to make it big?

A. I certainly can. Like them, I feel like I’m about to turn a corner for the better.

Q. Is there a shady side to Manhattan’s modeling industry?

A. I think shady is relative. It’s very competitive and a guy’s ability to network socially can be a powerful attribute.

Q. What’s the craziest thing you’ve seen a guy do to land the job?

A. I’m not sure. Truthfully, I always felt like anything shady that goes on around me is none of my business. I focus on myself because sticking my nose in other guys’ business only serves to distract me from my path toward my goals.

Q. You play Benjamin Reed who is the iconic male figure; the guy gay men want to be and be with. Do you feel any pressure having to live up to the ideal?

A. I do feel a certain pressure to having to live up to an expectation that my looks invite. But it’s a privilege to be able to embody that ideal and being able to test the limits within a character like Benjamin has been a blessing in helping me find my strengths and comfort in my own skin.

Q. Benjamin Reed is oversexed and promiscuous … are you?

A. (Laughs) You can’t ask for a better playing field then the limitless variety New York offers. I wouldn’t call my past promiscuity an escapade but my experiences have each shaped me in becoming the man I am today. But because those days are behind me, and out of respect for my current relationship, I’m going to have to answer with a tasteful discretionary silence and leave room for mystery and imagination.

Q. To be fair, Benjamin Reed is also a loving friend and successful businessman.

A. I can relate to having a close council of family and friends that have my unconditional love. As far as ambition, I aspire to be as much in command of my looks in serving me in my career.

Q. Quincy Morris, the show’s producer, said, “Benjamin Reed’s looks are perfect on the outside but, like all of us, he is on his own road to completion.”  What do you think he meant by that?

A. I think that although Benjamin maintains an appearance of having it all and being in control, there is sadness in his loneliness. Perhaps he can find a sense of completion if he found someone to be vulnerable with.

Q. How will you know when you have completed your life’s ambition?

A. My personal life ambition will be achieved when I’m supporting myself with what I love to do and in a position to really give back and raise awareness in a variety of humanitarian philanthropies.

Q. We have to discuss your nude scene in the show.

A. That was my first time naked on camera.

Q. How did you prepare for it?

A. Besides some push-ups and sit-ups, I really just tried to focus on getting comfortable in my surroundings and make the bedroom my own. Everyone on set was really professional so it was actually easy.

Q. Of all the characters on the show, who are you most like?

A. The beauty of the show is there are pieces in all the characters that are easy to identify with.

Q. If you could play another character on In Between Men, who would you choose to play?

A. Jacob Ross. The bisexual twist with the pull of past and present relationships offers a lot to play.

Q. Of all the guys on the show, who is the most dateable?

A. Dalton. It seems as though he’d be pretty drama free.

Q. Who is the most toxic?

A. My character is probably the most toxic because you’d never know where you really stand.

Q. What advice would you give your character Ben?

A. Sometimes Superman needs to be saved. Once in a while you have to let yourself off the hook and let your guard down.

Q. What was your favorite storyline in season one?

A. I think the most compelling storyline is Dalton struggle having a relationship with a closeted man.

Q. For those who haven’t tuned into the show yet, why should they?

A. It’s unique to anything else out there right now.

Q. What’s in store for the second season of the show?

A. I can’t spoil too much but there will be an important addition to the group.

Q. What would you like fans to know about Ben Pamies?

A. As for me, there’s not much to tell. At the moment, I’m grateful that life is busy and I look forward to what the future has in store.

Creep of the Week: Dolce & Gabbana

Jonathan Groff Is More Than All Right